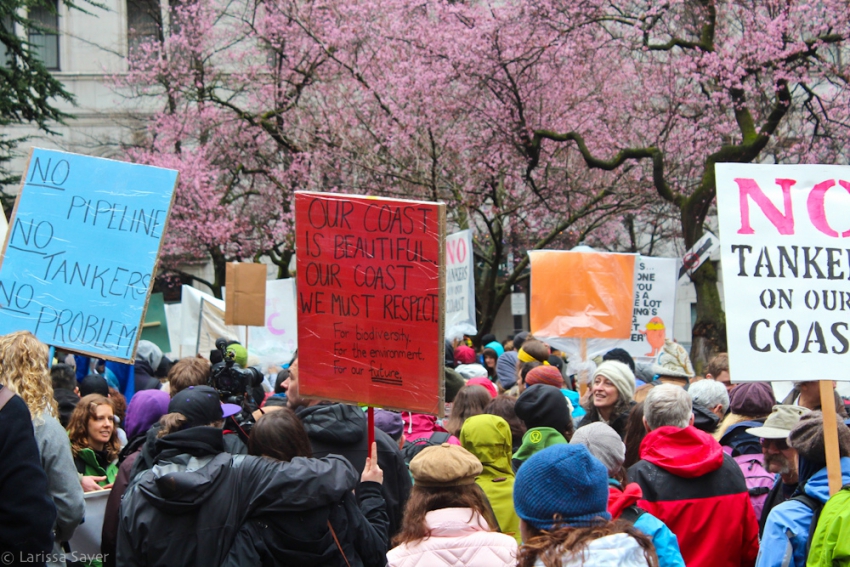 NDP MP Nathan Cullen introduced a bill designed to stop the Enbridge Northern Gateway pipeline, a 1,100 kilometre pipeline proposal that would carry 535,000 barrels of diluted bitumen across British Columbia to a terminal in Kitimat.

“It will ban the passage of supertankers off BC’s north coast—this is an explicit response to the experience that we’ve had through the hearings around Enbridge Northern Gateway,” said Cullen in a press conference earlier today.

Cullen’s proposed bill would ban supertankers from transporting oil across the north coast of British Columbia. He’s also calling on the National Energy Board to consult with communities that are impacted by the project.

“This project is fraught with peril. For anyone who’s ever sailed or been on the north coast of British Columbia, these are some of the most tempestuous waters in the world—it is where [BC Ferries ship] Queen of the North sank a number of years ago,” said Cullen.

“There’s been an informal moratorium on tankers on the west coast and this would formalize it,” said Marshall. "Given the public’s involvement in the Northern Gateway hearings and how many people came out in opposition—it’s easy to see that this would be quite well received in the province."

But the idea may not be well received by the federal government. Just last week, Natural Resources Minister Greg Rickford signed a Memorandum of Understanding with the United States Secretary of Energy and talked about the importance of energy security.

“Energy security is about more than just reliable supply—it’s about responsible resource development and responsible energy use—that’s why today we are announcing new measures to enhance our historic partnership," said the Minister of Resources said of Canada’s relationship with the United States regarding energy resources at a press conference last week.

The current route of the proposed project shows that the pipeline would travel through the community of Kitimat and end on its shoreline.

The mayor of Kitimat, Joanne Monaghan, said that while she has expressed doubts about the proposed Enbridge Northern Gateway pipeline—she would like to see a refinery in their community.

“I have always said that I have doubts about shipping raw bitumen down the channel—but I also would like very much to have a refinery in the area which would ship a refined product which is much safer than bitumen and the reason being for one is the refinery would put about 3,000 jobs into our area,” said the mayor.

Canada's largest private union, Unifor, said in a statement that its supporting the NDP’s proposal that also aims to create jobs in the energy sector while respecting the wishes of Canadians, the rights of First Nations and the environment.

"The NDP's bill puts Canadians first. It has a long-term vision that respects democracy and good jobs," said Joi Warnock, a director at Unifor.

"One hundred and thirty First Nations, most BC municipalities, and at least half of British Columbians oppose the Enbridge Northern Gateway proposal. According to the Alberta Federation of Labour, only 228 permanent jobs will be created from the pipeline,” continued Unifor’s statement.

Cullen’s proposed bill also aims to make the National Energy Board accountable by ensuring consultation between the federal government and everyone affected by the proposal including: First Nations people, provincial and municipal governments and residents impacted by the project. This is important because it engages citizens to ensure their concerns are considered in the NEB’s final decisions.

“What the current federal government has done is narrowed the ability for citizens to engage. It’s not in the spirit of democracy,” said Marshall.

Monaghan said the NEB has only consulted the Kitimat community, “a little bit” but their city council has held open houses, workshops and there are citizen groups that help gather information about the proposed pipeline.