“It’s more than just about a pipeline. It’s about our voice and our right to speak, our home,” said Cullen. 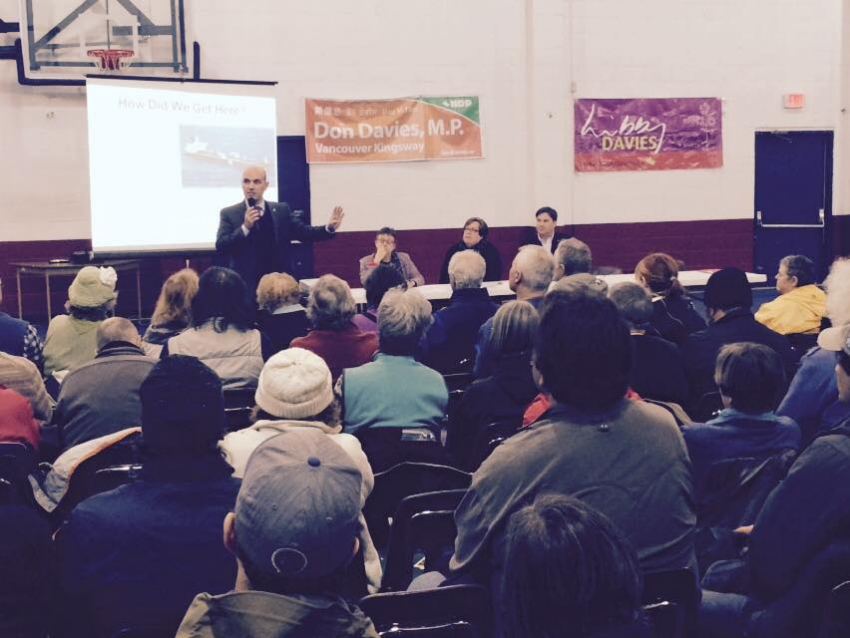 Photo of MP Nathan Cullen (by davehuehn via Flickr)

"It’s about our voice and our right to speak, our home,” NDP MP for Skeena-Bulkley Valley Nathan said.

Bill to protect the coast from tanker spills

“People all across BC feel squeezed out of any review of the Enbridge pipeline," said  Cullen to a diverse group of youth, First Nations, MPs on Sunday. "They want to hear how community control of natural resource planning can be restored.

Approximately 250 people attended the town hall event at the Aboriginal Friendship Centre to hear about Cullen’s Bill C-628, aimed at protecting the North Coast against supertankers.

The bill was introduced last September and will be put to a vote in four weeks. It seeks to ban the passage of supertankers off BC’s north coast (Dixon Entrance, Hecate Strait and Queen Charlotte Sound) to prevent any threats proposed by Enbridge Northern Gateway.

The bill also requests a stronger consultation process with local communities and asks to consider the impact the project will have on jobs in Canada.which was a forum for questions, concerns and comments about the Enbridge Northern Gateway Pipeline.

The implications of Northern Gateway and the federal approval process, said Cullen, go beyond oil exports: "It’s about our voice and our right to speak, our home."

Long-time MP for Vancouver East Libby Davies and MP for Vancouver Kingsway Don Davies also joined Cullen on the panel for his Take Back Our Coast campaign. Davies received a round of applause as he told the crowd they had power to make a difference.

“We can have a strong economy and sustainable development,” said Davies. “We can have jobs for people and [also] nurture, protect and preserve our environment.”

Cullen laid out a three-part plan and timeline to explain “three reasons Enbridge Northern Gateway will never happen.” The steps included taking the issue to the courts; approving Bill-C628; and casting ballots for the federal election.

“It’s a real wake-up call to the Conservatives,” said Cullen prior to the event. “If the Conservatives don’t respond to the people in BC about their concerns about the pipelines, we’re in an election year, and that’s going to have a lot of consequences.”

“This thing is never going to get built. We are peacemakers, we are going to stop this [pipeline] peacefully,” said Cullen over the sound of loud applause, “because our fourth option isn’t going to be great.”

Nathan Cullen also wrote to Finance Minister Joe Oliver on Sunday, outlining what his party would like to see in the next federal budget. The budget has been delayed until at least April as the Conservatives analyze the impact of declining oil prices.

When asked how he would have responded to the recent pressure to the federal budget, he replied, “We wouldn’t have put all of our eggs in one basket. We’ve seen the Conservatives determinedly drive towards oil, and no investments in clean technology, which is booming around the world.”