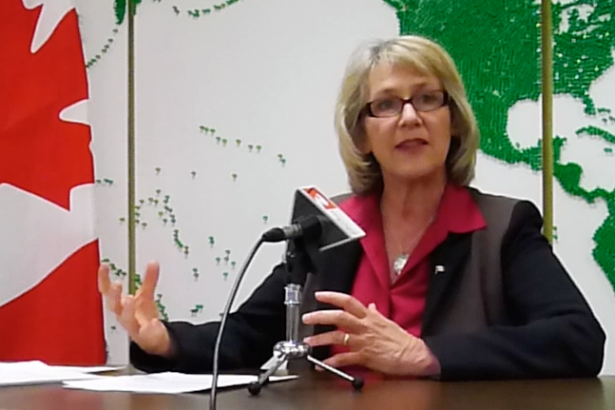 "There's the political electioneering based on balancing the budget at the expense of First Nations, cities and infrastructure, but there's also an incompetence and an inability to deliver." Joyce Murray did not mince words.

In a short but scathing press statement, Murray, Liberal MP for Vancouver Quadra, accused the Harper government of using its latest budget as an election ploy, shifting numbers around to make themselves look fiscally responsible. You can see the video of Joyce Murray's infrastructure statement below.

"Despite what the Prime Minister has to say, the economy isn't his top priority. Electioneering is. The main thing he is focused on is being able to go into the next election saying he eliminated the deficit that his government created in 2008. Because of this, important federal investments are being delayed for years."

Murray said that not only was infrastructure getting short shrift at Harper's hands, but so too was First Nations education. Promised investments, she said, are also being delayed until after the election: "That's an issue of inequality that's simply not acceptable."

The Harper government's Building Canada Fund budget contains as much money as did the 2007-2014 version, but for a span of ten years rather than seven. The real money doesn't kick in until 2015; in other words, after the next federal election.

"The Conservative government is cutting infrastructure by 87% for the next two years."

I guess the change in my pocket wasn't enough

That's for all of Canada.

By comparison, the federal government, led at the time by Paul Martin's Liberals, contributed $450 million for Canada Line.

Murray presented this chart; "the cliff" refers to the sharp drop in Building Canada Fund money disbursed once we reach 2014 (wait, that's this year). 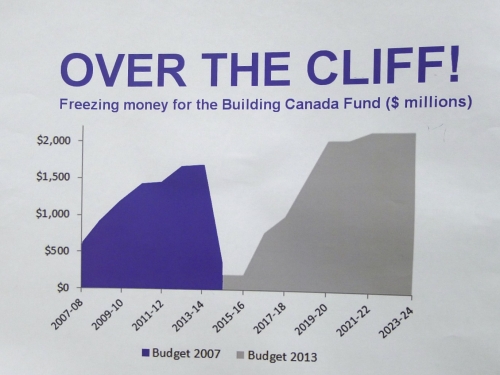 From 2015, that funding does the Grouse Grind until 2019, when it finally reaches today's levels once more. The ten-year plan, said Murray, "is completely back-loaded for political reasons."

Metro Vancouver has big plans for that federal money. Not only is Alice digging away at the new Evergreen Line, but we want to extend the Expo Line further into Surrey. We're replacing the Massey Tunnel and possibly the Patullo Bridge as well.

She added that the Broadway Corridor "is a top priority for the City and the Province", which should make our municipal leaders feel a bit better about their still-to-be-written pitch.

Still, municipal and provincial are only two out of three: you still need the f-word.

Globally influential in Vancouver for TED 2014