Fans of Mozart’s Requiem had the opportunity to take in multiple performances of this monumental work recently. Mozart was more prolific in other compositional genres – opera, for example, or chamber and orchestral music. Before we get into the nitty-gritty of the merits of each, it’s worth discussing a bit of history about Mozart’s last work.

A bit of background

The Requiem was commissioned in early 1791, the same year that Mozart died. At the time of his death, the Requiem was left unfinished (only one section was completely written out in its entirety) and Mozart’s wife turned it over to Franz Xaver Süssmayer, one of Mozart’s students, for completion. This work is not without controversy; there is a lot of discussion about what happened to the Requiem after Mozart’s death – if you’re interested in learning more, a simple google search will yield a number of articles. There are many different version of Mozart’s Requiem in existence today, but this past week, both the Vancouver Chamber Choir and the Capilano University Singers performed the Süssmayer edition. 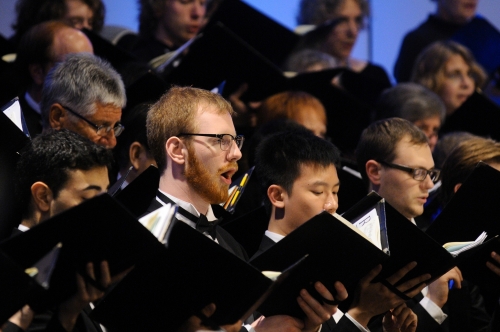 The Capilano University Singers were joined onstage by the Capilano University Festival Chorus and the generically-named “Professional Orchestra” – a total of 135 choristers, 4 soloists, 1 conductor and 22 instrumentalists – and this made for a VERY full stage at the Blueshore Financial Centre. While the visual was initially a bit overwhelming, the resultant sound helped the audience get over it quickly. The orchestra and singers were well-balanced and the choir’s articulation was remarkably clear. The soloists were drawn from alumni of the program, and their ensemble work was wonderful. They get a fair amount of downtime during the choral sections of the Requiem and I want to draw particular attention to tenor Sergio Augusto Flores, whose charisma and enthusiasm for the piece never waned and was truly infectious. It was a delight to watch. 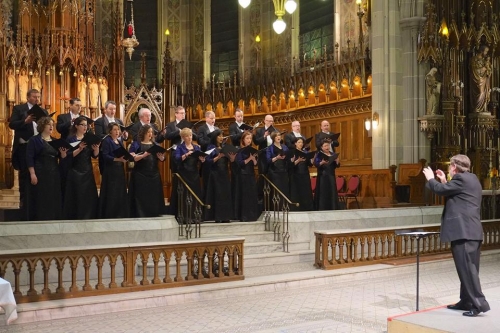 With a mere 42 choristers, the Vancouver Chamber Choir’s performance of Mozart’s Requiem had a bit more breathing room on stage. The Chamber Choir was joined by the Pacifica Singers and the Vancouver Chamber Orchestra, and while the blend of the two choirs was good, the balance was sometimes off with the orchestra (in the orchestra’s favour). The interpretation of the Mozart was slower, and though I didn’t particularly care for the tempi, some of the solo work was truly outstanding. Soprano Shannon Mercer stood out amongst the soloists for me, and her elegant phrasing and nuanced singing was so purely Mozart in its execution. It was some of the best solo work I've heard in any performance of Mozart's Requiem. Ms Mercer and alto soloist Anita Krause were joined by two members of the Vancouver Chamber Choir who held their own as soloists, tenor Carman J Price and bass Wim Vermeulen.

Not every requiem is written with the intention of church use, but Mozart’s is, and with the abundance of beautiful church acoustics in Vancouver, I was sorry that both productions opted for concert halls as their chosen venues. Maybe next year.