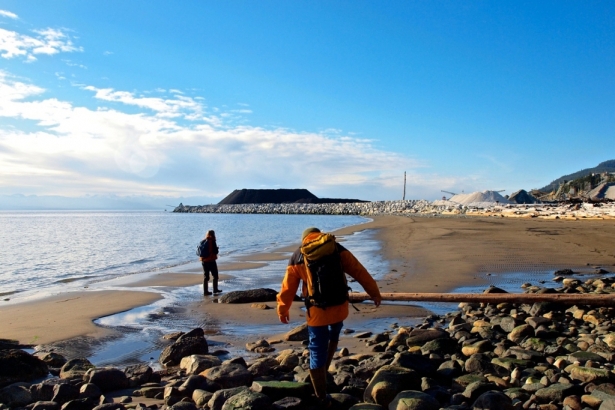 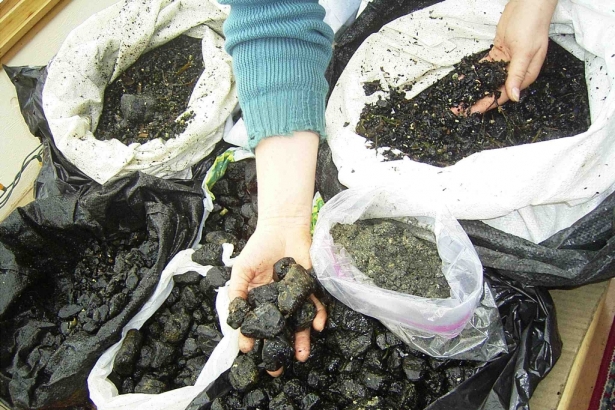 Residents of Texada Island collected samples from the beach several times over the winter and spring to have them tested for coal.

A group of residents of Texada Island, BC, are alarmed by news that the BC Ministry of Energy and Mines quietly approved permit amendment that allows the Lafarge Canada coal plant on Texada Island to expand its exports up to 20 times its current rate.

The group has already found chunks of coal washed up on the beach -- meaning that the mine was breaking its permit regulations and allowing coal into the water.

“There were larger chunks of coal scattered among the gravel and rocks alongside the very big oyster and clam bed, and within an hour and a half...we manage to collect about 70 pounds of coal," said one local resident, who collected coal with five other residents last week. He wished to remain anonymous due to tensions between residents working for the coal company.

He said the group saw coal near a large oyster and clam bed, which was traditional First Nations harvesting ground.

Arsenic in samples and under-the-radar changes

After initially finding coal on the beach in February, the Texada Island community raised $4,000 through crowdfunding to get the samples tested at a lab in Burnaby after the Ministry of Energy and Mines refused to test it. The results showed high levels of arsenic and a chemical signature consistent with coal. 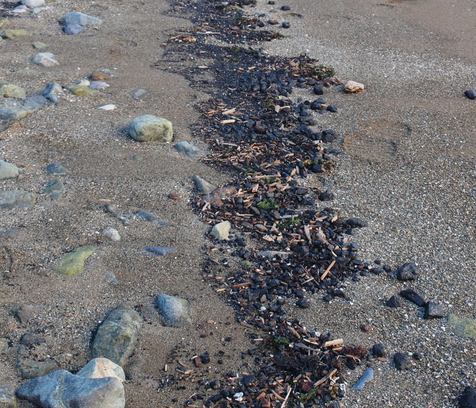 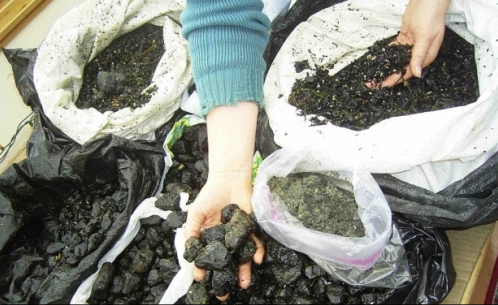 Anti-coal activists were stunned that the amendment was approved on March 12, almost completely under the radar. It came to light after the BC Environmental Assessment Office sent an email to a member of the public.

“The only reason we found out about the permit approval is because one of our supporters had been writing letters... and got an email back from the environmental assessment office with the news that the permit had been approved,” said Laura Benson, coal campaigner with Dogwood Initiative. “It was the first anybody had heard of it.”

She added that members of the community had been calling for stricter oversight of current operations.

The existing permit states that the Lafarge coal plant isn’t permitted to allow any coal to enter the marine environment. The new permit originally stated that no coal can enter the water except in the event of more than two inches of rain in a 48 hour period, or a 1-in-5-year weather occurrence. The ministry then asked Lafarge to amend its storm water plan to accommodate only 1-in-100-year weather occurrence.

This permit approval comes less than two months before the province is expected to make a decision regarding the proposed expansion of the Port of Metro Vancouver at the Fraser Surrey Docks. Should the proposal get approved, the port would ship tonnes of coal by barge to Texada Island for export.

This is the first of three permits required to set the expansion project in motion. There is still a development permit and an air emission that must be secured for Port Metro Vancouver.

Residents repeatedly asked the ministry for the opportunity to comment on a revised storm water management plan, but the ministry refused, and approved the amendment.

Mei Lin Yeoell, a Langely resident, said she spoke with Minster of the Environment Mary Polak on the phone last week to ask about the ministry’s position on coal expansion.

“I asked questions along the lines of, what about issues that are broader than just this proposal, such as commitment to greenhouse gas emissions, and she said it was irrelevant,” Yeoell told the Vancouver Observer.

“I also wanted to know, what about the possibility of contaminated water getting into the river. Again, that wasn’t her department’s concern. It was to be handled by Port Metro Vancouver and the federal government. Basically, her position was that [the Ministry of Environment] wasn’t going to be involved unless MHO [Medical Health Officer] raised significant issues.”

Along with other local residents, Voters Taking Action on Climate Change spokesperson Donald Gordon also met with Polak to ask that she order an environmental assessment for the expansion project.

“Her response was that this project does not trigger an environmental assessment, but she also has ministerial discretion to go beyond what triggers there are,” Gordon said. “What they’re really saying is they’re not legally obliged to do it.”

Asked for comment, the BC Ministry of Environment office stated in an email that Texada coal capacity expansion "did not meet the threshold" in regulations to warrant an environmental assessment.

Gordon said residents also met with the Minister of Health to request and health impact assessment, and were denied again.

“It’s fairly shocking when you consider that this is a tiny project when compared to LNG plans, and it f the provincial government is wiling to push forward all these basically at any cost, there are going to be a lot of things that fall by the wayside.”