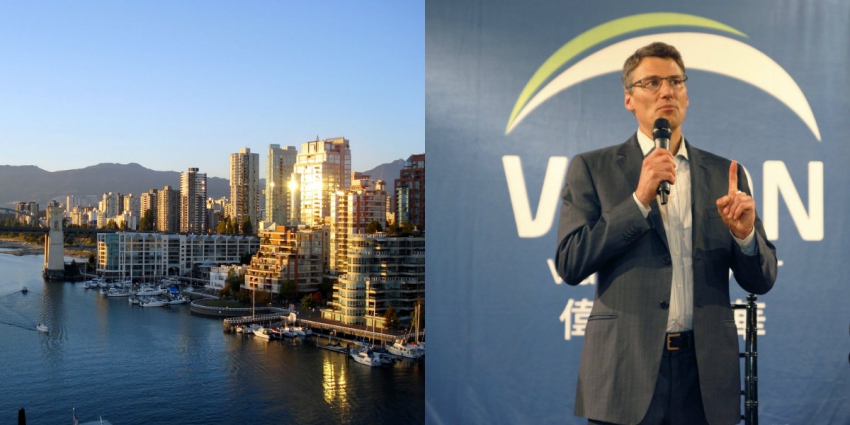 Vision Vancouver and the Mayor have made it increasingly clear that opposing Kinder Morgan’s pipeline expansion will be a top priority.

Rival NPA mayoral candidate Kirk LaPointe is not yet decided on the project, but he took aim at Vision on Monday, stating on his website that the Mayor and his party's "rigid ideology" has "hamstrung" Vancouver's economy.

"He is ashamed of our economy,” LaPointe wrote, “and that has contributed to Vancouver having the lowest family income growth of major Canadian cities." Last month, B.C. Premier Christy Clark lobbed criticism at Burnaby Mayor Derek Corrigan for opposing Kinder Morgan, while a Canadian Natural Resources Alliance director said such opposition by mayors was harmful for business.

But some argue that municipalities are right for getting involved in such issues, because pipelines and tankers will strongly affect Greater Vancouver's economy. Kinder Morgan's bid to triple the capacity of the Trans Mountain Pipeline to carry 890,000 barrels of bitumen per day could result in up to 340 additional oil tankers in the Burrard Inlet every year, which increases the risk of spills along the coast.

CRED’s 2013 report said while Kinder Morgan's pipeline expansion could create 50 permanent jobs, it could also put at risk thousands of other jobs in the event of an oil spill. It said the expansion could bring $355 million in provincial tax revenues, but that a spill could cost in billions of dollars in direct clean-up costs. With over 100,000 people employed in tourism and real estate jobs, a large scale spill could affect the city's economy long-term, the report said.

Vision Vancouver's candidate for council Niki Sharma said in an earlier interview she didn't think taking a stance on the pipeline expansion proposal was premature, given the amount of information available on the proposal.

“The (Kinder Morgan) pipeline expansion poses too great a risk for Vancouver without benefits,” said Sharma. “It's not good for our city."

“Our economy and our tourism, it all depends on our (city’s) natural beauty."

In February, Vancouver and Burnaby signed up as official intervenors in the NEB's hearings on the project. Both sought a motion at the Union of B.C. Municipalities convention last month for municipalities to become more involved in the decision-making process around Kinder Morgan's proposed expansion.

Vancouver’s Green Party councillor Adrian Carr agreed that the pipeline was an important part of the debate around Vancouver's economy and environment. But she questions why Vision Vancouver didn’t take a leadership role on the issue earlier.

“When they had the chance to make this a really important election issue, they didn’t,” Carr said. “That was back a few months a go when I put forward a motion to council to ask for a plebiscite on the ballot of this Nov. 15 election and Vision Vancouver voted against it.”

McDowell said even though municipalities don't have the final say on the pipeline expansion, it would be "very difficult" for a project to go through if municipalities voiced strong concerns about it.

“It’s municipal governments’ responsibility to think about their citizens, the economy, and I think by making their statements (opposing the pipeline) they have taken all this into consideration,” she added.

“There are a couple of elections coming up; one municipal government election on Nov. 15, and a federal election in October next year,” said Perrin. “Making the pipeline a high-profile issue now will make it a priority in defeating the Harper government,” he said.

“It’s a bigger issue that affects not only Vancouver, but everyone in the world.”

With files from Jenny Uechi.