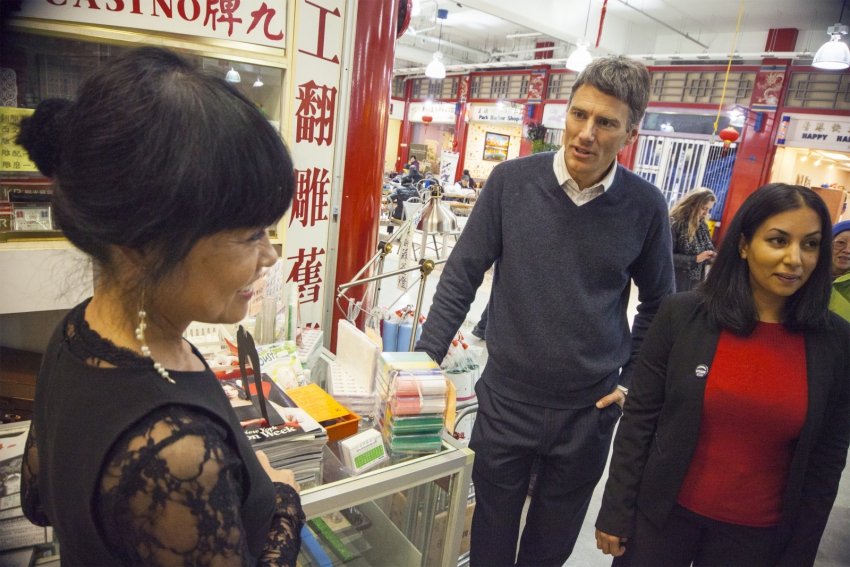 With advance polls closed and just two days to go until City Hall’s next council leader will be decided by voters, mayoral candidates seized upon key battlegrounds Thursday.

Vision’s Gregor Robertson swooped in on Chinatown to press palms with shopkeepers in an ethnic specialty mall.

Robertson, who speaks some Mandarin, then headed for dim sum, where he explained his “apology” that he offered voters during a CBC mayoral debate this week.

“I just wanted to reflect that I’m committed to doing better, and recognize my ambitious agenda has not always worked for everyone.  We want to be sure that we as a city get better at hearing from people, using innovative consultation moving forward,” he told the Vancouver Observer.

He emphasized the “risk” of an NPA government “undermining all the good work on affordable housing.”

Chinatown may be a focus for Robertson, due to the heated debate over new developments in the culturally rich neighbourhood.

COPE mayoral candidate Meena Wong said many seniors and others are furious with the mayor over that issue.

“The development on Keefer street, and the closing of the street markets -- people are very disappointed.  The area is losing its history.  The new condos had no respect for the local characteristics and history of Chinatown,” Wong said Thursday.

Wong went “main streeting” – (election term for talking to voters on the street) – on Commercial Drive, where people told her they “don’t want to see their neighbourhood become a coal harbour” she said. 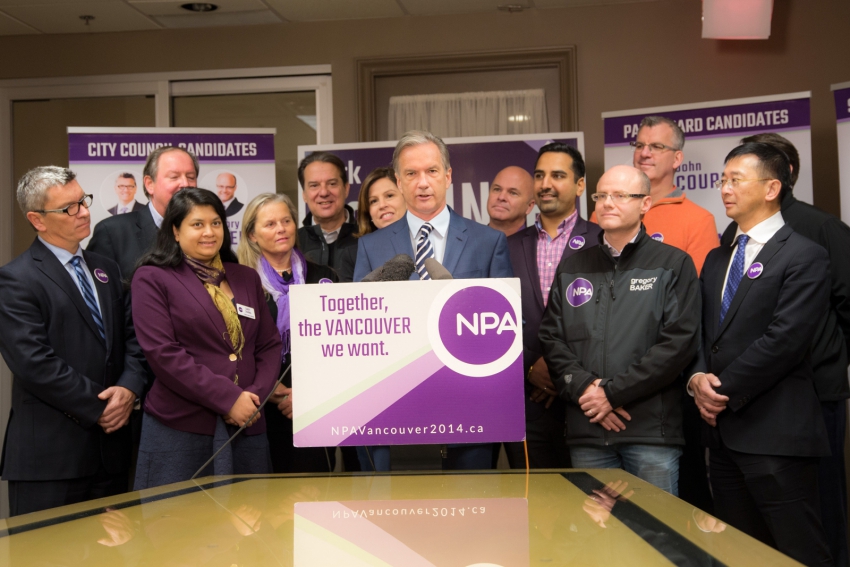 NPA mayoral candidate Kirk LaPointe handed out flyers at Broadway and Cambie, and made affordability the focus of his media briefing.

“Gregor Robertson can say he’s sorry, but it’s too late. He’s failed to keep Vancouver affordable because he has been distracted by other issues - many outside his jurisdiction,” said LaPointe in a statement.

“We will put Vancouver families ahead of developers who are selling to overseas buyers. We will create childcare spaces and reduce the financial pressures on Vancouverites,” he added.

The party bought full-front-and-back cover ads in the Metro Vancouver newspaper to drive home its message.  A day earlier, Vision did something similar in the Vancouver Courier.

Robertson, who admitted the race has tightened, said NPA is “spending a fortune on advertising – that’s their campaign style, along with the negative campaigning.”

Media reports suggest Vision's lead is just five per cent above all others in decided voters.

The Green Party of Vancouver does not have a mayoral candidate.  But incumbent councillor Adriane Carr said the party hit street corners near Main and Broadway, Kingsgate Mall, and other areas in East Vancouver on Thursday.

"People should hold to their goal of getting a more balanced council," said Carr Thursday night.

Where to go Saturday night

Want to watch the results come in at political party gatherings?  Here's some options:

Vision Vancouver – party would not disclose the location of its Saturday gathering until Friday, even though it’s widely known to the media.