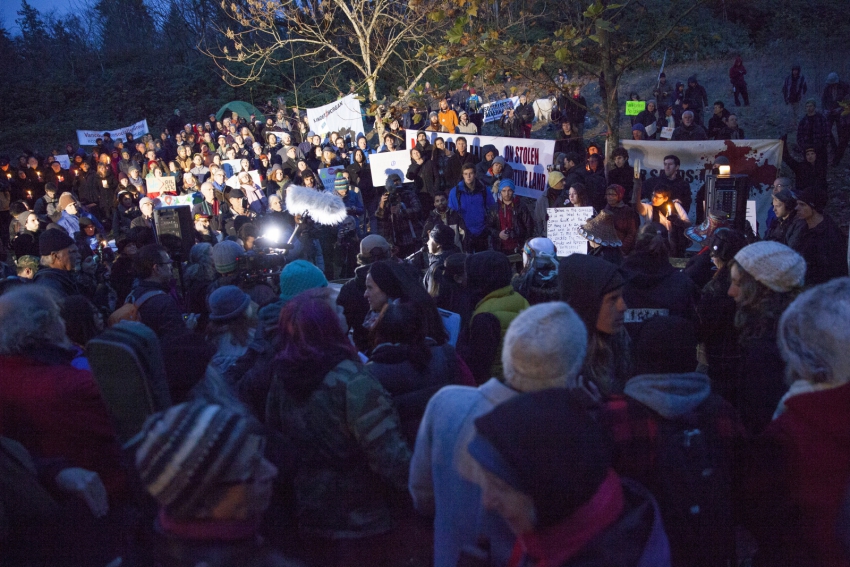 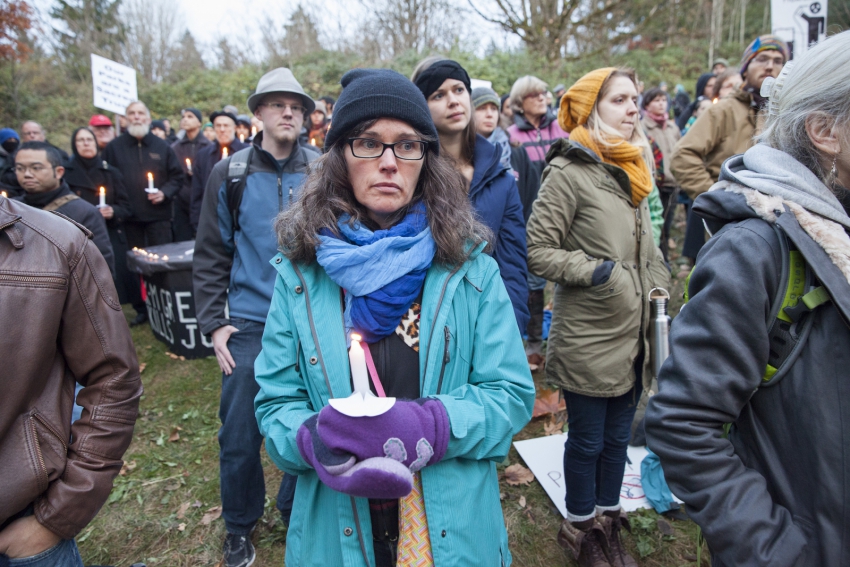 Dustin Rivers from Squamish Nation (Skwxwú7mesh-Kwakwaka’wakw) gives a speech to the 800-plus-crowd that showed up on Burnaby Mountain Monday night. Photo by Mychaylo Prystupa.

What started as a trickle of oil-pipeline protesters two months ago has spilled into a massive anti-Kinder-Morgan movement on Burnaby Mountain, if Monday night's crowd is any indication.

It is now illegal for protesters to interfere with the company’s controversial pipeline survey work for the Trans Mountain pipeline expansion. The RCMP were everywhere, but neither they nor the court order seemed to stop the crowds from expressing anger at the project. Youth, seniors, native, non-native all showed up in force. 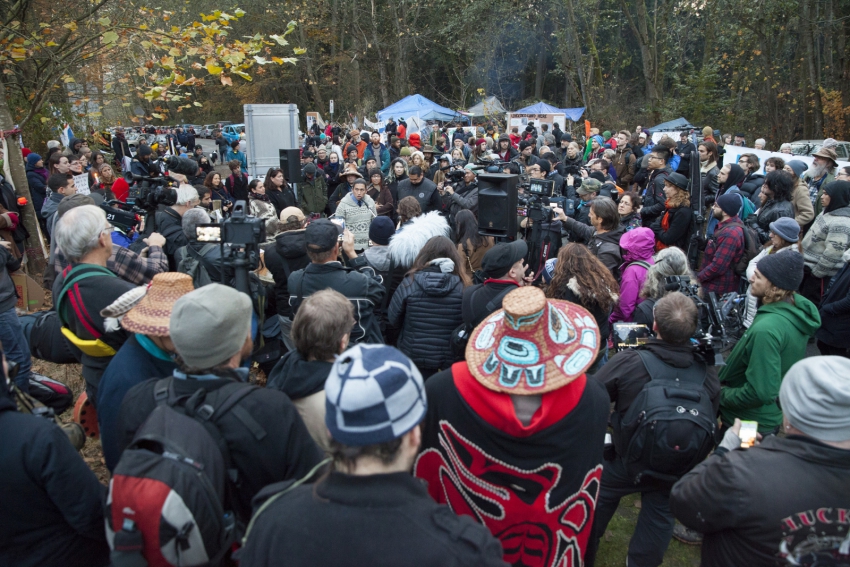 Those attending to the conservation park on the mountain lately have seldom seen a larger crowd. Live TV crews, satellite trucks, photographers and film-makers were everywhere. Helicopters and planes buzzed overhead. A drone was seen, too.

“Our actions of what we do, are for everybody," continued George.

"The reason why we as a nation step forward, because of this flawed process of the National Energy Board, who are allies with these pipelines… [Prime Minister] Harper is looking out for his buddies," he yelled.

Texas-based Kinder Morgan was asked to comment on this story Monday evening. We will update this article when they respond.  The company is attempting to do geo-technical work required by the NEB for the board to consider a proposed re-routing of the pipeline under the mountain, to avoid homes and streets.

But both the company and the NEB are now facing several legal attacks.  Environmental groups and First Nations state the board's requirement that hearing participants be "directly affected" is unconstitutional, because it denies those who wish to speak up about climate change for example.

The troubles for the Kinder Morgan pipeline on the mountain first heated up this summer.

That's when the City of Burnaby and its mayor said the project was trespassing municipal lands. Legal battles ensued, culminating in a order from the National Energy Board to allow the survey work to proceed.

But protester clashes with the company's crews in late October seemed to drive wider public interest.

The company filed an injunction and civil suit against two SFU professors, an administrative worker, a retiree and a young activist.

Public reaction, on the Vancouver Observer website for example, has been overwhelming. A story about the social media hashtag "#KMFace"  — a mocking of the company's claim that protesters' facial snarls were a form of "assault" — garnered so much traffic it nearly crashed our web server.

Simon Fraser University biochemistry professor Lynne Quarmby is one of those being sued by the company.  She attended tonight's rally.

"I think it's amazing!  I think it's empowering.  It gives me strength to be brave," said Quarmby at the edge of the crowd, Monday night.