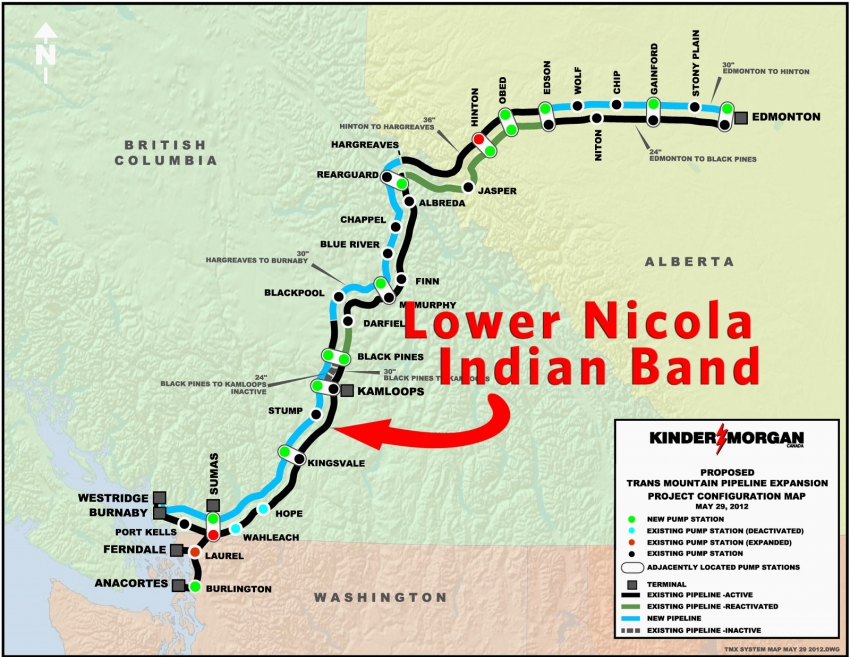 The chief of the Lower Nicola Indian Band south of Kamloops, B.C., whose territory is crucial to the $5.4-billion Kinder Morgan expansion project, wrote a strongly worded letter to the Prime Minister today about his "serious reservations" about the project.

Kinder Morgan's pipeline recently spilled 12 barrels of oil in June 2013 on the Aboriginal territory, in the province's interior.

Kinder Morgan owns a pipeline that has transported oil from Alberta to Burnaby for 60 years.  It is now is applying to the federal government to twin the pipeline, to increase the oil flow from 300,000 to 890,000 barrels per day.

The project would increase the number of oil tankers in the Vancouver area from 60 per year, to more than 400, said the company.

Read the chief's full letter below:

My name is Aaron Sam and I am the elected Chief of the Lower Nicola Indian Band, part of the Nlaka’pamux Nation. We are located outside of Merritt, B.C. in the heart of our traditional territory in the southern interior of British Columbia. As you may know, the Kinder Morgan pipeline currently runs through our Lower Nicola Indian Band reserve. One of the decisions our community has to make this next year is whether we will agree to the expansion of the Kinder Morgan pipeline through our Indian reserve and traditional territory.

I am addressing this open letter to you because many in our community have serious reservations about the Kinder Morgan’s Trans Mountain pipeline proposal. In this letter, I am not addressing specific impacts or concerns on LNIB lands and our traditional territory; I am addressing broader impacts that affect Canadians and the natural environment.

Many of us at Lower Nicola Indian band are very much concerned that your government hasn't taken any real steps to address climate change. For us to even consider approving the expansion of the Kinder Morgan pipeline through our territory, it is imperative that the Government of Canada take immediate, real steps to attack climate change in a meaningful way.

In addition, we do not support the expansion of the Kinder Morgan pipeline because your government has not done enough to regulate the oil sands and extract resources in an environmentally sustainable way. We believe that your government should initiate a meaningful dialogue with the First Nations and others who are affected by the extracting, processing and transportation of bitumen from oil sands across Alberta and British Columbia.

We also do not support the proposed project because of the possibility of an oil spill in the Salish Sea. While we know the likelihood of a bitumen spill could be relatively low, we believe it is still a risk not worth taking.

Many Canadians, including Nlaka’pamux people, are dependent on a healthy ocean and healthy salmon. If there ever was a large oil spill in the Salish Sea, it could decimate our salmon and our healthy ocean waters for generations. Although our traditional territory is located in the interior of British Columbia, our members and families still rely significantly on wild salmon as their main food source. We see our interests being compromised by such an oil spill. In addition, such potential decimation of salmon population would have a devastating cascading effect on most other living things in our traditional territory.

If the Government of Canada doesn’t take serious steps to address the above mentioned issues while engaging First Nations in a meaningful way, we will find it very difficult, if not impossible, to support the proposed pipeline expansion through our traditional territory.

Since 2006, your government has revised and weakened many environmental laws and policies dealing with pollution, bio-diversity degradation, greenhouse effect of gas emissions and climate change. You have also made significant budget cuts at Environment Canada and other Federal government departments, leading to criticism that undermines their ability to enforce remaining and weaker environmental laws in any credible way. The restrictions placed upon the ability of government scientists to speak to the public and the media also strengthens criticism that you are trying to limit the debate on environmental issues.