WesPac is trying to dodge a fundamental question, says critic: Should an LNG jetty be built in Tilbury Island? 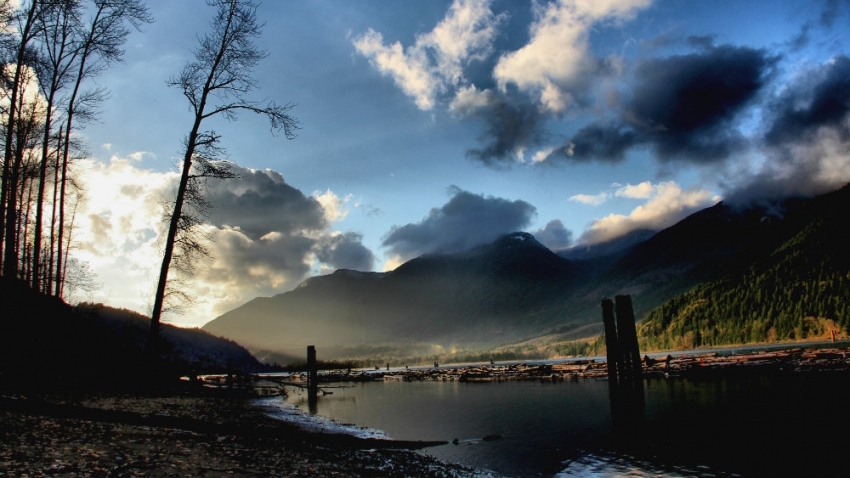 When Oak Bay-Gordon Head MLA Andrew Weaver first read about a project to build a marine jetty for loading Liquefied Natural Gas along the South Arm of the Fraser River, he remembers thinking it was a joke.

“It was like something you’d read in The Onion,” he said.

But as Weaver discovered, the proposal was very real. WesPac Midstream, the Irvine, California-based company behind the project, has already obtained a licence from the National Energy Board of Canada to export up to 4.76 billion cubic metres of LNG a year.

This is the approximate volume of 1,904,000 Olympic swimming pools— or enough to fill the International Space Station 5,199,000 times.

WesPac is now seeking environmental assessment approval for the LNG project from the provincial and federal governments.

On May 22, the Canadian Environmental Assessment Agency sent a public release seeking comments on the project and its potential effects on the environment in order to decide whether a federal environmental assessment is required. The deadline is June 11.

Weaver said many people weren't aware of the project until almost a week before deadline.

"A lot of people didn't know about this proposal at all," he said.

Environmental experts stressed that three weeks was not enough time to discuss a project of this scale along the Fraser. The company estimates that the jetty could bring more than 120 LNG vessels up the Fraser River per year.

That would profoundly impact the river, its salmon population and the people who rely on the fish, they warned.

Despite the project's potential impacts, it was relatively unknown until a few days ago. Voters Taking Action on Climate Change spokesperson Kevin Washbrook said he came across the proposal by accident while looking for something else in the B.C. Environmental Assessment Office’s website. He said the public consultation process on this project has been sorely lacking, and has been trying to raise awareness about the project.

“One of the biggest problems we have is that the government doesn't go out of its way to inform the public about contentious things that are moving ahead,” Washbrook said. “They have an obligation to provide notice, but unless you know where to look for the notice, they're not going to make sure you find out. It's frustrating.” 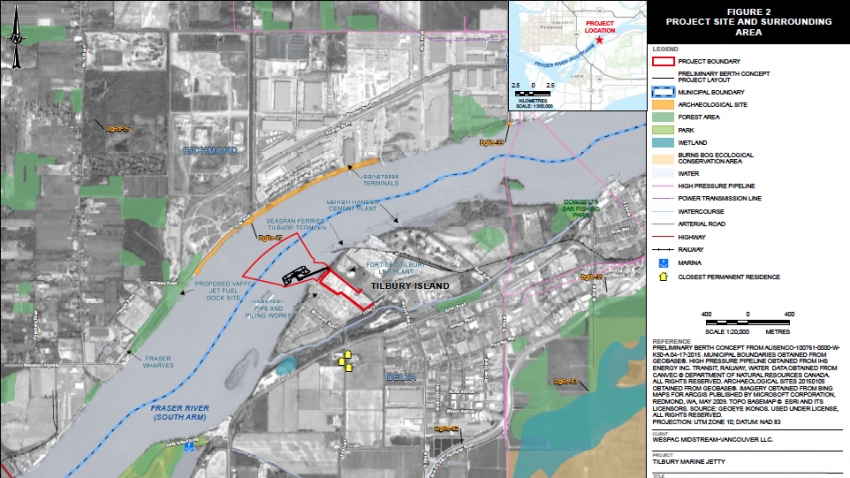 WesPac’s proposed marine jetty would be located in Tilbury Island in Delta, adjacent to the existing FortisBC Tilbury LNG Liquefaction plan. Its construction would demand an investment of $175 million, and it is estimated that it would become operational in 2018.

According to WesPac’s project description, the facility would accommodate “either self-propelled LNG carriers up to 90,000m3 of LNG capacity that would serve offshore markets, or individual LNG barges up to 4,000m3 that would service regional markets.”  The jetty, according to Washbrook, would be bigger than the proposed Woodfibre LNG terminal in Squamish.

The project’s website says that it is predicted that the jetty could serve 24 LNG carriers a year in the early years of operation, and up to 73 depending on future requirements. The project description, though, says that “it is estimated that up to 90 LNG barge calls and up to 122 LNG carrier calls (of various sizes) could occur at the jetty per year.”

The Vancouver Observer called WesPac’s headquarters in California to inquire about this an other matters related to the project, but no spokesperson was available before the deadline.

WesPac’s website claims that the company has maintained a focus on Liquefied Natural Gas since 2011. But the company doesn't mention any involvement in any other project similar to the one proposed for Tilbury Island. That lack of experience is a major concern, Washbrook said.

“I've looked at their website extensively and all their links. As far as I can tell, they've never built a LNG terminal anywhere in the world,” he said. “So I'm not inspired that they're very experienced players in the industry.”

A week before the Canadian Environmental Assessment Agency asked for public comments on whether a federal environmental assessment on the project should be required, B.C.’s Associate Deputy Minister Kevin Jardine requested the CEAA to substitute the B.C. assessment process for the federal one. That, for MLA Weaver, is another concern.

“The Clark government is so desperate they're trying to get anything on LNG to happen,” said MLA Andrew Weaver. “It's really irresponsible economic policy the government should be held accountable [for] because it led the public down this garden path. “

In its public notice, the CEAA is also asking for comments on whether to allow the B.C. government to take over the review. The deadline to receive comments on this matter is again June 11.

The Vancouver Observer contacted the CEAA to inquire about how many comments they have received so far, but got no response before the publication of this story.

Environmental concerns along the Fraser

In order to build the facility, WesPac would have to dredge up to 18.7 hectares at the vessel's loading berth. According to BCIT instructor Dr. Marvin Rosenau, that could impact the main channel habitats from invertebrate species that are high-quality white sturgeon food. Rosenau is an outspoken advocate for the conservation of white sturgeon in the Fraser River, which is home to some of the last stocks of wild sturgeon in the world. 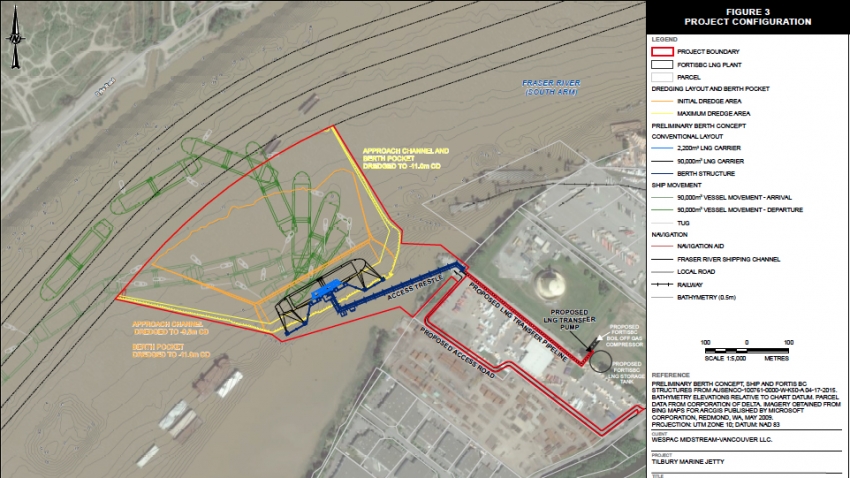 WesPac would have to dedge up to 18.7 hectares in order to build the facility. Source: The WesPac Tilbury Marine Jetty Project Description CEAA Summary

“Some of the area dredged may be intertidal or fairly shallow sub-tidal areas,” he said in an email interview. “A large number of invertebrates that are food for fish will be living in the dredged footprint, and will be lost when the dredging occurs.”

For Dr. Rosenau, the assessment of the fisheries-ecological values included in WesPac’s project description summary is “incomplete and sloppy” and “appears to have simply been a desk job.”

“Some of the comments relating to species-at-risk in the body of the report are incorrect (i.e., missing, wrong designation)," he explained via email. "For example, eulachon is hardly even referred to although there have been extensive discussions surrounding its ‘at-risk’ designation in the recent years."

“The work cited ... is old (i.e., 15-20 years out of date) and there have been more recent assessments (albeit limited), at least in this general part of the sand reach.”

In case of accidents and malfunctions during the operation of the jetty, WesPac says in its project description that “provisions have been included in the design of the project to contain LNG if a spill was to occur on the loading platform.”

There is no specific information on what those provisions are.

WesPac also says that it will require vessels to comply with applicable safety requirements when at the projects. But, it warns, “responsibility for the care, safety and control of the LNG carriers, LNG barges and, upon loading, the LNG product will generally lie with the receivers and with the vessel operators.”

For Washbrook, by placing blame on LNG carriers, WesPac is trying to dodge a fundamental question: should an LNG jetty be built in Tilbury Island?

“The biggest thing that's missing form this assessment is an analysis of risk,” he says. “The fundamentally most important questions about this project haven't been asked and won't be asked if the proponent has its way in terms of the scope of the review.” 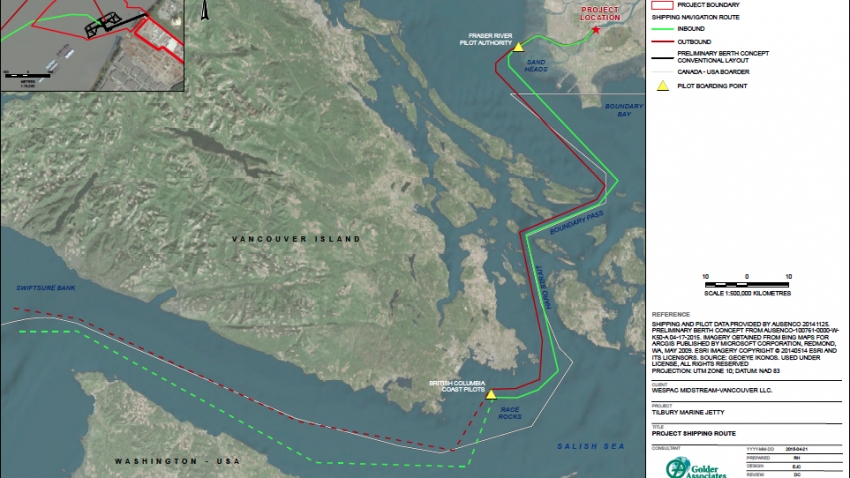 The company estimates that the jetty could bring more than 120 LNG vessels up the Fraser River per year. Source: The WesPac Tilbury Marine Jetty Project Description CEAA Summary

WesPac’s report identifies 14 First Nations as potentially affected by the building of the jetty. One of them is the Stó:lō Tribal Council. The company says that notification letters to introduce the project have been sent to the Stó:lō people, but that there hasn’t been yet a response from the Nation.

But Ernie Crey, an advisor for the Stó:lō Tribal Council, says he has no knowledge of any communication from WesPac.

But even if notification was given, Crey believes that WesPac shouldn't be going forward with the project before hearing back from the potentially-affected aboriginal groups.

“It's not enough to say that you gave people some time to get back in touch with you —except some of them didn't, that's too bad, we're going ahead,” he said. “That’s not acceptable to us.”

The Stó:lō Tribal Council has enough expertise and knowledge to evaluate the jetty project, Crey said, but that the three weeks given by the Canadian Environmental Assessment Agency are clearly not enough.

“Such terribly short notice to expect even highly-educated, very-sophisticated members of the public —people from academia, people like that— to formulate a response would be entirely inadequate and insulting."

The Fraser River is home to one of the biggest salmon runs in the world, Crey argues, and there are more than 90 First Nations that rely on the fish.

“What they're doing here is a very sloppy job,” he said.