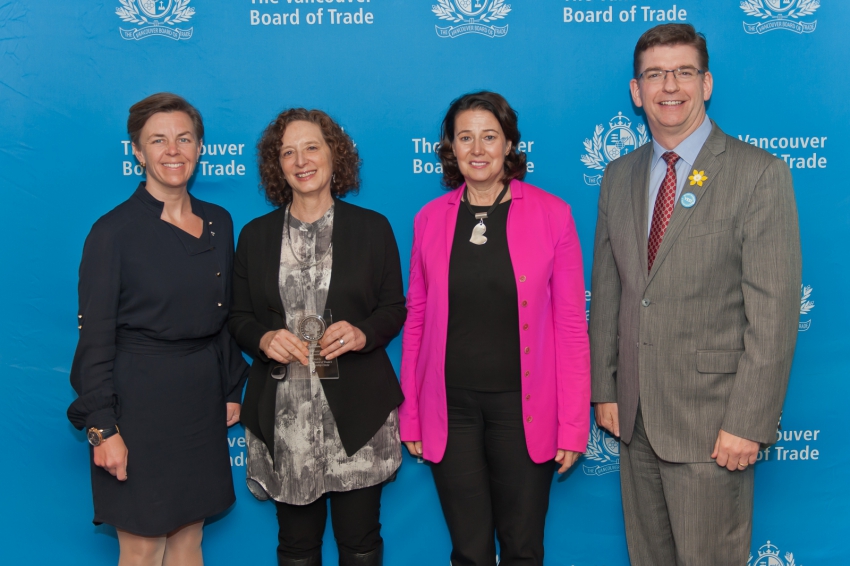 "In her early years as a journalist, Linda dreamed of someday owning her own media group," Vancouver Board of Trade Women's Leadership Circle vice-chair Fiona Douglas Crampton said.

"With the advent of new technology, she realized that the digital world offered her an incredible opportunity. So on a bootstrapped budget, Linda could follow her dream and that's exactly what she did. Linda said it's cliché, but true: if you can imagine it, you can do it. You need faith in your ideas and in yourself."

Solomon Wood is currently developing a companion publication, The National Observer, which will launch next week with a focus on energy, environment and related news and politics.

The Wendy McDonald Awards acknowledge women’s leadership in business, and are presented by the Women's Leadership Circle (WLC), a signature program of the Vancouver Board of Trade. The WLC is one of the largest women's business networking groups in Canada, engaged in the social, business and political communities in which the Board of Trade operates.

The Wendy McDonald awards were named after the Vancouver Board of Trade’s first female chair, who was the former president of BC Bearing Engineers and an original investor in the Vancouver Whitecaps.

Inspired by "brave and bold" example

Solomon Wood has received numerous prestigious awards, both in Canada and the US, throughout her journalism career. As a young reporter working for The Tennessean, in Nashville, she won The United Press International Awards for Best Investigative Journalism and Best Public Service Reporting for a series that uncovered extensive fraud in the insurance industry's sales of "burial insurance" to the poor. She won The John F. Finney Award for Economic Reporting for a series on crime, overcrowding and corruption in Nashville's public housing projects.

In the nineties she was a freelance writer and focused on women who were fighting against huge odds to make substantial improvements in their countries from Asia to Africa. This series led her to spend substantial time with and eventually write profiles of Wangari Maathai in Kenya, Medha Patkar and Vandana Shiva in India, and Noreen Kaleeba in Uganda.

"These women demonstrated that one person really can make a difference, that one voice inspires many," Solomon Wood said. "They created huge communities around their work.  They drew sustenance from their friendships with other women as they faced into policy brutality, AIDS, and other tragedies. Even in dire circumstances, they found a way to laugh, or sing, or simply share stories. They embraced differences and made everyone around them feel stronger."

In Canada, she founded the Vancouver Observer in 2009 on a laptop in her living room.

In 2010, under her leadership, the online news source won the Canadian Online Publishing Award for Best Articles. In 2014 and 2012, the Vancouver Observer team was honoured with a Canadian Journalism Foundation Excellence in Journalism Award (Small Media), which honours an organization that embodies exemplary journalistic standards and practices.

"I feel humbled and excited to receive an award named for such a respected and dynamic business leader," said Solomon Wood. "Wendy McDonald broke every barrier she encountered. She was brave and bold and I'm inspired by her example."