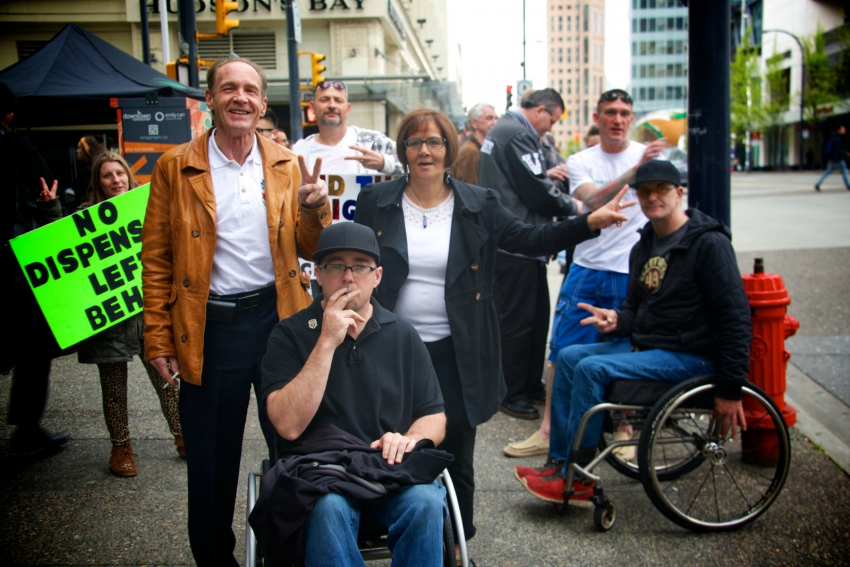 Activists gather around Anne Genovy to "medicate" on the sidewalk in front of the Federal Court on Georgia street. Photo by Danny Kresnyak

"I could't even eat this morning," said medical marijuana patient Anne Genovy as she sat in the front row of audience seats in Vancouver's Federal Court on Thursday.

"My hands were shaking. The weed relaxes me, but not knowing where I'll get it (marijuana) from or if I'll be arrested is torture."

Genovy is one of an estimated more than 175,000 people with a doctor's recommendation to use marijuana as medicine.

Collectively, they wait to exhale as Federal Court Justice Michael Phelan weighs evidence in Allard v. Health Canada. At stake is the future of who will supply patient prescriptions and who is allowed to grow marijuana in Canada.

After a six week adjournment the case has returned for summations.

During instruction, Phelan reminded the court that in his ruling he can strike out parts or all of legislation, but cannot write in additional clauses.

If Phelan rules with the defence, Health Canada's commercial production of marijuana growth will be given constitutional confirmation and a handful of companies will have exclusive license to grow and supply medical marijuana to Canadian patients.

If Judge Phelan sides with the plaintiff — that Health Canada's regulations are unconstitutional — he can either scrap the entirety of the medical marijuana program or rule to send the government regulatory body "back to the drawing board" to formulate a new constitutionally sound regime.

Health Canada tabled the contested order, called the Marijuana for Medical Purposes Regulations (MMPR), with an announcement that all home growth must cease by March of 2014. Under MMPR rules, only commercially licensed providers are permitted to grow marijuana. Patients would receive their supply by mail.

Additional stipulations under MMPR include a 150 gram cap on possession and access to the dried marijuana flowers ("buds") and lower potency leaves ("shake" or "trim") only.

The plaintiffs in this case are patients licensed under the older Medical Marijuana Access Regulations (MMAR) which allowed for home growth and designated growers to grow for people who are unable to for themselves.

Counsel for the plaintiffs, John Conroy, has argued the MMPR is restrictive, too expensive and violates the rights to life, liberty and security of the person under Canada's Charter of Rights and Freedoms.Conroy won an injunction with this argument.

The laws of patient marijuana cultivation have remained in legal purgatory since. Under the stalemate MMAR licenses no longer have an expiry date, but growers cannot get an approved change of address and no new licenses will be awarded.

Specifically, Conroy has told the court the 150 gram limit, dry flower only stipulation and prohibition on extracts are unconstitutional and must be stricken from the rules.

Anne Genovy got her license in 2001, the first year of legal medical marijuana in Canada. She is on a limited disability income due to a complex diagnosis of health issues including HIV, hepatitis-c and most recently -- cancer.

Her prescription specifies a dosage of 25 grams per day and gives her legal right to possess and store 300 grams at a given time. Genovy said she could afford to grow her supply at home, but when she was forced to move, her license "got caught in the cracks."

Under the contested regime Genovy's supply would need to be reloaded by mail every six days at a projected compassionate discount price of $750 per parcel.

She said marijuana grown by MMPR-licensed providers is too expensive and of sub standard quality so there is no choice but to buy from dispensaries and the black market.

First opened in 1997, the BC Compassion Club Society (BCCCS) is the oldest dispensary in Vancouver.

In an interview with the Vancouver Observer, spokesperson for the BCCCS Jamie Shaw said the compassion society recently signed up client number 10,000, although this was done "over many years and not all are still active."

BCCCS is one of 80 dispensaries in the city. Shaw noted It's difficult to get an accurate count of patients, since many "hold more than one membership."

Dispensaries operate in the margins of the law and according to industry experts the vacuum created by the the federal government's inability to effectively design marijuana growth protocols is to blame.

The City of Vancouver has targeted a regiment of regulations to maintain order in the multi-million dollar high demand marijuana market. The design of regulations has been forwarded to a public hearing with support from several dispensary owners willing to organize.

In response, Minister of Health Rona Ambrose sent a letter to the Mayor's office warning not to "legitimize" marijuana dispensaries with business licenses. In her letter, Minister Ambrose echoed the prohibitionist argument that access will lead to "increased addiction" to marijuana, a plant Justin Trudeau has said would be legalized under a Liberal government.

The NDP has pledged support for the plaintiffs in Allard V Health Canada.

At a rally in march, NDP leader Thomas Mulcair told the Vancouver Observer the official opposition supports a "home growth" model to ensure medical marijuana patients have access to the medicine they need.

Counsel for the defence is expected to deliver summation on Friday.

The court has added a special session next week for patients with license lapses due to relocation or other variables introduced since the case entered appeal.

The date of Judge Phelan's final decision has yet to be announced.