Some experts fear the 15-page letter will intimidate people unfamiliar with the process into withdrawing their applications. 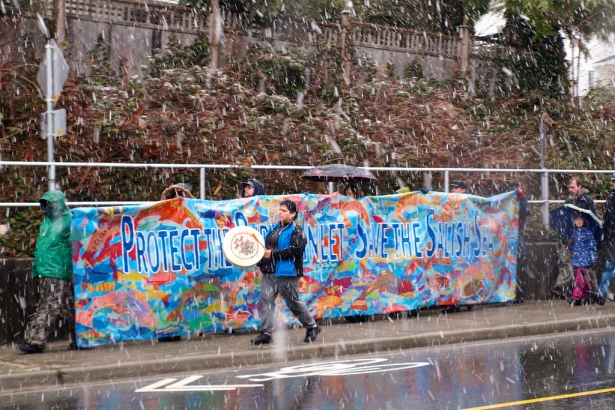 Community members join in a walk to oppose Kinder Morgan and other energy companies in the Burrard Inlet at last week's Salish Coast Winter Gathering. Photo by Jen Castro via Flickr.ƒ

In what some call a preemptive strike, Kinder Morgan's legal counsel sent a letter suggesting that some experts and community members who signed up as intervenors for Trans Mountain pipeline hearings may be considered ineligible. The 15-page letter outlines the key changes in the NEB Act -- brought about by the controversial Bill C-38 in 2012 -- and emphasizes why being an expert or having a connection to the pipeline is no longer enough to merit intervenor status.

Douw Steyn, a professor in the Department of Earth, Ocean and Atmospheric Science at UBC, received the letter, and he calls it “a disgusting and anti-democratic strategy” to limit participation in the hearings.

Steyn is a member of the Institute for Resources, Environment and Sustainability, as well as the Liu Institute for Global Issues, and his research focuses primarily on air pollution meteorology. But because the scope of the hearings doesn’t include broader questions of health and sustainability, his expertise may not be considered relevant.

The crucial change concerns the wording that describes who is eligible, from “any interested party” to only those who are “directly affected” or have “relevant information or expertise.” That expertise must be deemed to coincide with Kinder Morgan’s own 'List of Issues.' In this case, the list deliberately excludes the “socio-economic effects associated with upstream activities, the development of the oil sands or the downstream use of the oil transported by the pipeline.”

The letter also says Kinder Morgan has the right to take into account the NEB’s previous decisions, citing case of Enbridge’s Line 9 reversal, after which the NEB stated that it wouldn’t make broad policy decisions regarding climate change. It concludes by saying that, according to section 55 of the act, the NEB “may” accept intervenor applications from those will relevant information and expertise, but it is ultimately up to the board’s discretion to determine whose expertise will be useful.

“In any case, we are all affected by global warming, but of course the NEB has ruled that global warming cannot be a consideration in the hearings.” Decisions have not yet been made regarding who will be allowed to speak, but Steyn said the letter could be interpreted as a 'preemptive' attempt to get him and others to withdraw their applications before the NEB has a chance to make its decisions.

Lynn Perrin, legal researcher and consultant with FairAll Consulting, said she thinks the letter, full of legal reference and government regulation, has the potential to deter people with little or no experience with a process like this.

“I’ve worked with lawyers since 1994, I’ve been before a tribunal and it doesn’t scare me at all. However, if I didn’t have any experience at all in the process, I think it might make me think twice.”

Perrin applied for intervenor status both as an expert—she has a masters in public policy and has worked closely with communities fighting Kinder Morgan projects since 2011—and as a grandmother whose grandson lives roughly 100 metres from the proposed pipeline. She says she has no plans to back down.