Protesters used a megaphone, snarls, and the f-word to intimidate and delay Kinder Morgan's pipeline work, the company's lawyer told a court. 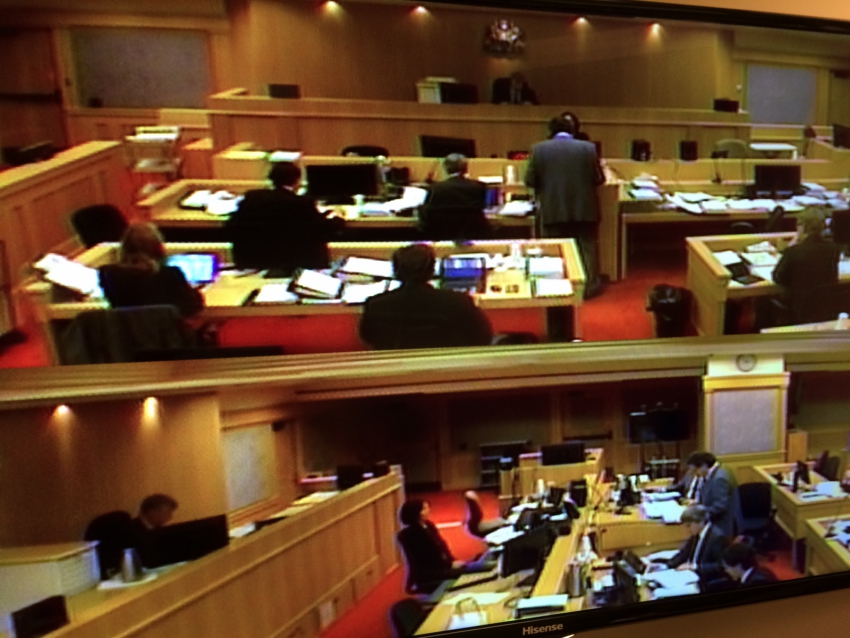 Describing Burnaby Mountain protesters as having an “abundance of exuberance and an absence of judgment”, Kinder Morgan’s lawyer led a legal assault against environmentalists in a B.C. Supreme Court Wednesday to try and get its $5.4-billion Trans Mountain pipeline expansion back on track.

Corporate lawyer William Kaplan, Q.C., told the judge the issue was neither “climate change” nor enviro-protesters’ right to freedom of expression.  The real legal trouble, he argued, was the protesters systematic and organized “conspiracy” to thwart and delay its Edmonton-to-Burnaby oil sands pipeline project.

“Their common design was not merely to express an opinion.”

“The evidence makes it clear that the defendants were prepared to engage in acts of civil disobedience – acts that could lead to arrest, a physical blockade that amounted to intimidation, and other such acts that go well beyond the expression of opinion,” said Kaplan.

The pipeline-giant’s lawyer walked the court through a series of tense clashes between company officials and protesters.  Many were video-recorded blasting a megaphone and using foul language, including the “f-word.”

“Quite frankly, my Lord, [the transcript of the protesters] contains language best read, and not spoken,” Kaplan told the judge.

When company crews were sent to fell trees in late October for example, the lawyer said angry and rude protesters stopped that effort – first by two women, but soon by a crowd of 20, which included defendants Adam Gold and Mia Nissen.

Women squatted in front of chain-saw workers, while others stepped on and bent company “no entry” signs.  Another threw a company sign into the trees, the court heard.

Crucially, defendant Adam Gold was said to have “blasted a mega-phone” within three inches of the ear of pipeline-project leader Carey Johannesson, using the “siren” function.

A protester later told the Vancouver Observer that the video evidence the company has of the horn was recorded by the crews at a "high volume."  The workers also had ear pieces on, because they were chainsawing it was noted.

Kaplan also said the protesters erected a “physical blockade” by linking arms, unfurling a “We Love This Coast” banner, and displaying angry snarls, he said, with reference to photo exhibits.

“You can see the expressions on faces.  Picture 10 is important for that,” he said.

“That is not just intimidation, that is actually an assault,” he added, provoking groans and chuckles from the court’s crowd.

“Some of the faces demonstrate anger, and frankly violence,” he added.

When the protesters were told the company had the legal right to be there by order of the National Energy Board, a protester snapped, “that does not matter, because we are on unceded native lands” the lawyer told the court.

Many Kinder Morgan crew members did not feel safe, he added.

Kaplan said there’s “irrefutable evidence” that the defendants, especially Stephen Collis and Alan Dutton, used phone networks, websites, social media, and a “high degree of planning” to get protesters to where company crews were popping up.

He added, the defendants have repeatedly stated their willingness to stop the company in the news.  Professor Stephen Collis told a Burnaby newspaper for instance that Kinder Morgan crews would have to go through his “band of citizen rangers” and “Caretakers” first, the court heard.

Physical blockades of company work also include an obstruction pile near borehole one, comprised of debris and “jack-o-lanterns that said ‘No Kinder Morgan’” – a description that provoked laughter from the court’s public gallery.

The company is seeking to continue geotechnical, soil, wildlife, and archaeological studies.  It also want to detonate “small explosive charges” to do geo-physically map the mountain’s underground, for a “preferred corridor” tunnel for the last leg of the proposed pipeline.

The work was required by the NEB for this alternative pipeline corridor, intended to avert homes and streets.

“If there is no injunction, and the work cannot be done, and the information cannot be filed, the preferred corridor option could fall off the table.”

“That does not mean there is no application for a pipeline expansion.  It means it goes through the [existing pipeline] right of way,” said Kaplan.

The Kinder Morgan lawyer suggested the main goal was to stop the defendants, not collect money from them.  The company states that every month the pipeline is delayed costs the company $80 million in lost revenues.

“The costs of delay are massive.  My submission is they are not a collectible amount,” said Kaplan.

Up until recently, the battle over the pipeline-giant’s intended activity was between lawyers.

The City of Burnaby and its mayor had tried for months to stop the company in court and at the National Energy Board.  But in an Oct.23 NEB ruling, Burnaby’s conservations bylaws were ruled  “inapplicable, at least temporarily” said Kaplan.

That's when the company resumed its plans, and the pipeline conflict turned to the protesters.