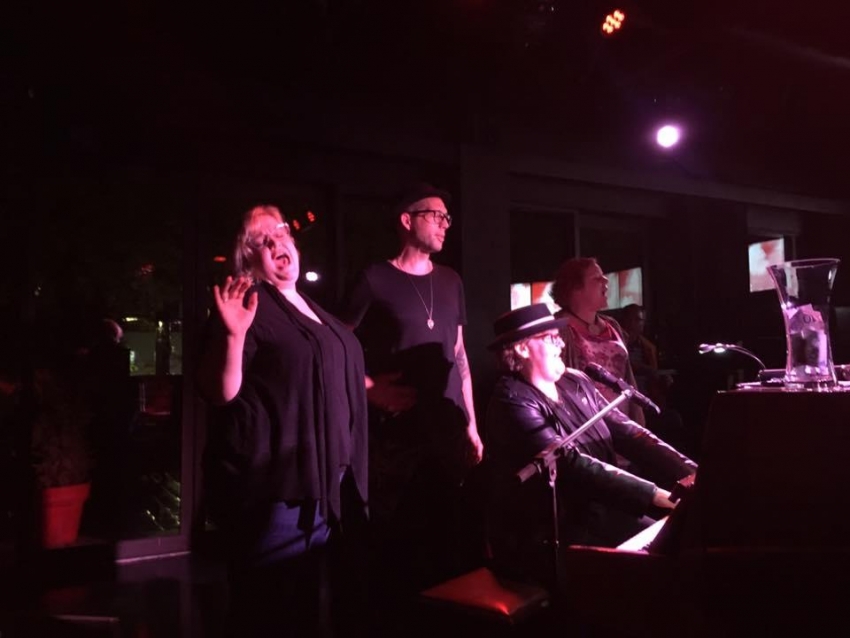 The swooping melody from Dreamgirls helped secure Jennifer Hudson an Oscar for her vocal acrobatics. But the powerhouse vocals filling the room aren’t J-Hud’s: they are miraculously, improbably issuing from the mouth of a diminutive white boy.

No wispy falsetto here: he’s belting out the song in its original key, defying the gendered laws of vocal range for all but the very highest notes — when he gestures to an enraptured audience that gladly fills in the gaps with their own voices.

It’s the kind of virtuouso performance you remember for the rest of your life, and it’s unfolding at Keys, a weekly piano bar that takes over Bute Street’s XY each Wednesday night.

The event celebrates its one-year anniversary on October 19th, marking its transition from experiment to West End institution. It’s the brain child of Luke Frye, a Wyoming-born accountant (yes, you read that right!) who moved to Vancouver after a couple of years in New York City, and missed the piano bars (like the famous Marie’s Crisis) that he’d enjoyed in NYC.

I discovered Keys in March, after my friend Alka Tandan told me there was a bar scene I just had to check out. I was sceptical, because I’ve never been much of a bar fly: I can’t hold my liquor, I hate trying to have a conversation in a noisy room, and most crucially, I’ve never really enjoyed the kind of live music you hear in bars.

When I was in my teens and twenties, I accepted bar-going as the price of having a social life…but was frankly delighted to reach the age and stage at which I only encounter live bands at weddings.

But my friend Alka knew my weakness: I’m a showtune fanatic. And Keys — unlike just about every bar scene out there — is all about the showtunes.

Walk into the bar at 9 pm, and you’ll likely find Sean Allen at the piano, kicking off the night with “Wilkommen" from Cabaret. Allen shares performance duties with Kerry O’Donovan, playing a mix of Broadway standards and new musicals, along with a range of other genres.

They don’t sing alone. On a typical Wednesday you might hear Trish Everett-Kabut, a recently minted theatre Ph.D., tackle Andrew Lloyd Webber — or listen to a Sondheim number that’s been carefully polished by a cast member from Theatre Under the Stars.

You’ll hear R.G. Miller rattle the walls with “Sit Down You’re Rocking the Boat”, and you’ll see Michael Barry Anderson get up from the piano to shimmy his way through “All That Jazz”.

You’ll certainly catch a few songs by Alan Menken — either from Little Shop of Horrors, or from one of the many Disney movies (The Little Mermaid, Beauty and the Beast, Aladdin) that birthed a new generation of musical theatre fans.

And you can be sure that there will be a few songs that get the whole room singing, like “Seasons of Love” (from Rent) or “One Day More” (Les Miserables).

In between these staples, anything can happen. The week after Prince died, we sang along to “Purple Rain” and “Little Red Corvette”.

When Mamma Mia came to town, a handful of cast members showed up and lent their pipes to the proceedings. Then there was the week a table full of birthday celebrants requested a medley of sitcom theme songs, and — well, maybe some things are best forgotten.

For a musical theatre nerd like me, it’s sheer heaven. I may spend my workdays listening to show tunes on Spotify, but there’s nothing like hearing great songs performed live, especially when so many of the performances are by local actors with amazing voices.

I’ve only once summoned the courage to get up and sing myself (an ill-chosen duet from Oklahoma!, which I’ll attribute to my aforementioned status as a two-drink drunk) but I happily sing along from the sidelines.

Yet even I wouldn’t claim that the best thing about Keys is the ability to channel Broadway in Vancouver. What makes the evening so special is the eclecticism of the crowd, and the way it brings a range of people together as an ersatz community.

There are young aspiring musical theatre performers, and older, longtime theatre lovers. There are plenty of gay men — and lots of women and straight couples. There are local regulars, and visiting theatre fanatics. There are professionals with amazing voices, and amateurs who win the room over with their bravery and enthusiasm.

And then there are the random moments of serendipity that you will remember forever — like that Dreamgirls performance.

It turns out that the performer was J.R. Bruno, in town with the touring company for The Book of Mormon. You can get a taste of his powerful falsetto on YouTube, but his solo tour-de-force lives only in the memories of those of us lucky enough to catch him at Keys.

See more
How to parent in a digital world
Father's Day: it's never too late to be a better dad