BC NDP Leader John Horgan delivered a speech on climate change at the speaker series, Thinking Big About BC at the Morris J. Wosk Centre for Dialogue at SFU, hosted by the Broadbent Institute, Jan. 23, 2017. 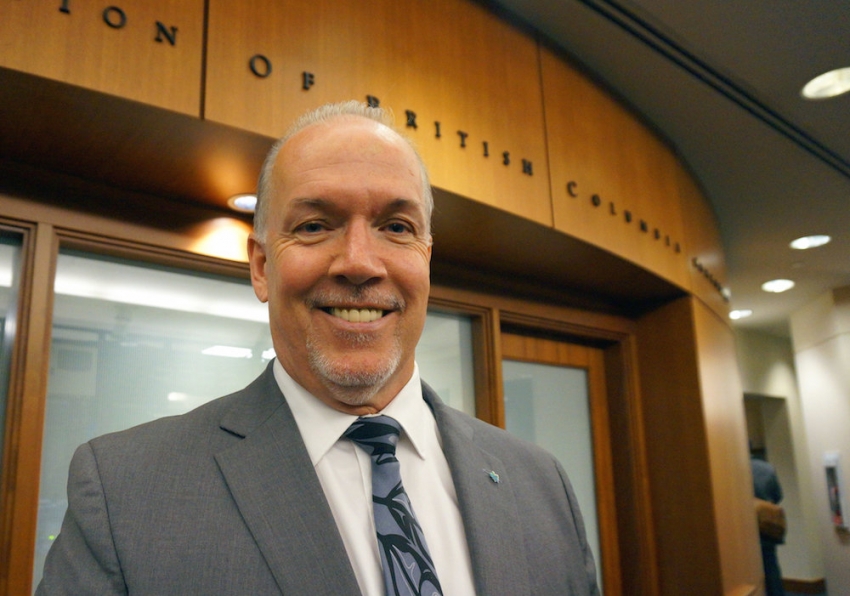 BC NDP Leader John Horgan delivered a speech on climate change to the Broadbent Institute in B.C. on Jan. 23, 2017. Photo by Jenny Uechi.

I want to start by thanking you for inviting me here today. I’d also like to acknowledge that we meet on the unceded territories of the Coast Salish peoples.

In 2007, my wife Ellie and I drove through BC on what we called the Dam-Moose tour.

And we’re driving all through the province—and seeing the amazing vastness that is BC’s mountains and forests—in the era of the pine beetle.

I’m colour blind, so I couldn’t see the difference between the green trees and the red trees.

But I could hear Ellie exclaiming as we drove, and I wanted to see what she was seeing. So she started giving me the ratio of dead forest to live forest: 40% there, 60% here, 80% on that hillside...

For people who could see it, it was real. And undeniable.

But because I couldn’t see it—quantifying over and over and over— that’s what made it real for me. The repetition. The numbers.

The annual global temperature record has been broken five times since 2005, including the last three years.

I’ll say that again – we’ve broken the temperature record each and every year for the last three years.

I was very fortunate to work with the NDP environment minister, Joan Sawicki, when she brought in BC’s first climate action plan in the late 90s.

She was the first political leader to really talk about climate change in BC.

Back in the late 90s, following the Kyoto Accord, she talked to me about how we all live on this ball, surrounded by gases, and the temperature is rising.

I remember Joan telling me that if we keep doing what we’re doing, it won’t last.

It wasn’t talked about as much then, but she was undeniable.

I was working for the minister of energy at the time, and I heard her. I understood it. But it wasn’t inside me. And when I left government, I didn’t think a lot about it.

When I became an MLA, I had a visit from Cliff Stainsby who started grilling me on climate change.

Cliff was a strong campaigner on social justice issues, and an early advocate for climate action.

I don’t know if any of you know Cliff, but he’s tenacious and smart.  I’d even say relentless.

He talked about the effects of climate change on people and our environment:

The droughts in California that drive up food costs for our families.

Changes to rain patterns that impact our livestock, agriculture, and community water reserves.

And the serious changes yet to come:

And threats to our food, our water supply and, of course, our health.

His passion and the science were undeniable.

But I also know not everyone is at the same place when it comes to understanding climate change in our province or around the world.

Last Friday the US got a new president, Donald Trump, who doesn’t believe the undeniable.

We in this room can agree the problem is undeniable. And the time for debate is over.

We must keep global temperature increases below two degrees, come hell or the inevitable high water.

Just last week I was showing someone around my constituency – out past Sooke on the way up to Port Renfrew and we drove by Gordon’s Beach and a row of houses at the water’s edge. Family homes for generations. As sea levels keep rising, those homes will be lost.

The science is telling us loud and clear – it’s almost too late.

But how do we find solutions? What are we willing to do to get results?

I think that comes from being positive.

And for me, that means looking at the climate problem as an opportunity for an economy that works better for people and the environment.