Jody Wilson-Raybould has been knocking on doors since September last year, and said above all else, people in her riding "want change." 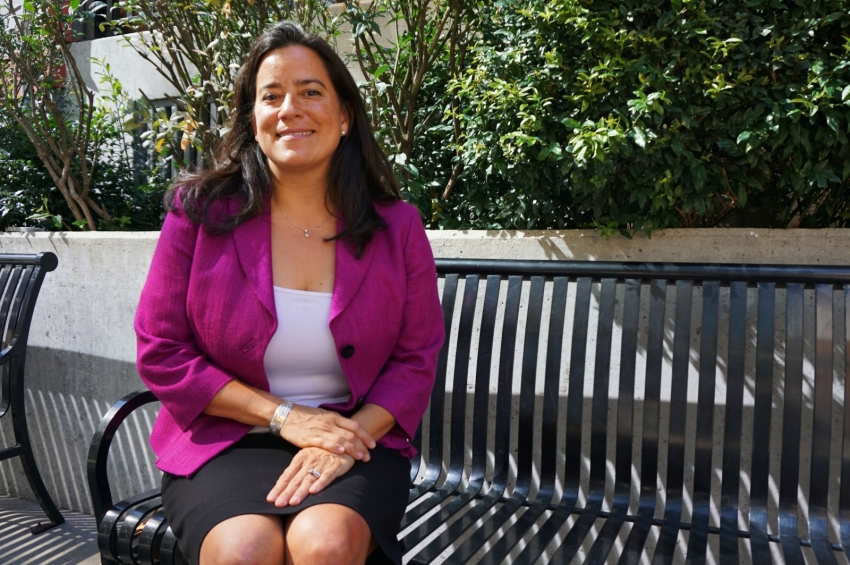 Jody Wilson-Raybould is the Liberal candidate for Vancouver Granville, a new riding in the 2015 federal election. Photo by Elizabeth McSheffrey.

Leadership has always been in Jody Wilson-Raybould’s blood.

Her grandmother, Ethel Pearson (Puugladee), was a revered Elder of the Kwakiutl First Nation, and her father, Bill Wilson (Hemas Kla-Lee-Lee-Kla), was a leading theorist in Indigenous politics and former vice-president of the Native Council of Canada.

Along with her mother Sandy, they taught her about duty, democracy, and how she could use her gifts to improve quality of life for others.

“I was raised by a family that taught me to know who I am, believe in myself and where I come from,” Wilson-Raybould said from a coffee shop in her Vancouver Granville riding. “Also and most importantly, they instilled in me a sense of responsibility and a duty to give back.”

Does that mean she grew up with dreams of running for federal politics?

Not necessarily, she said with a smile, but she has always lived by her family lessons of maximizing one’s personal potential in order to help others reach their own.

“Our responsibility as a community is to ensure that people can fulfill their roles and that their voices are heard,” she explained. “That’s why I’m here.”

In fact, Wilson-Raybould has a long history of bringing marginalized voices to the table, both as a lawyer and community activist. After serving as a Crown prosecutor for four years, she was elected as commissioner by the chiefs of the First Nations Summit, and in 2009, as regional chief for the Assembly of First Nations.

She has devoted herself to the advancement of First Nations governance, fair access to land, resources, and titles, as well as improved education and health care services.

Her list of volunteer work is impressive too; Wilson-Raybould has served as a director for Capilano College, the Minerva Foundation for B.C. Women, the Nuyumbalees Cultural Centre, and the National Centre for First Nations Governance, among others.

“Vancouver Granville is my home,” she said of her community engagement to date. “I have lived and worked here most of my life… the people and priorities in this riding matter to me.”

That’s why she decided to take up partisan politics, she explained — out of concern not only for Canada, but for the diverse community in Vancouver Granville.

Getting the country back on track

“When you see something wrong, you get involved and you do your part,” she said. “I… have real concerns that our country is going in a direction that I don’t recognize.”

In July 2014, she became the Liberal Party’s official candidate for Vancouver Granville, and in September, started knocking on local doors in preparation for Canada's 2015 federal election.

“We have been working really hard for over a year… engaging the people in this riding to understand the issues that matter to them more and how I can ensure I move forward and understand what our community wants.”

And what do the people in Vancouver Granville want?

Affordable housing, quality health care, and an economy that balances growth and expansion with care for climate change and the environment, she said.

“People want change,” Wilson-Raybould explained.  “Our riding is incredibly diverse from the east to the west, all across the political spectrum and there’s consistency in a lot of what we’re hearing from people.”

Vancouver Granville is a brand new riding made from four portioned off sections of two Liberal ridings, an NDP riding and a Conservative riding to the south. Some might be anxious running in such a colourful district, but what others see as a challenge, Wilson-Raybould sees as opportunity.

“We have the opportunity with this new riding to put a new stamp on how we, as a riding, are going to conduct our business and engage beyond the election, and I think that’s pretty powerful,” she said. “People seem very receptive to starting out and ensuring that we build that foundation of community.”

As a member of parliament, Wilson-Raybould said she would focus on bringing local messages to Ottawa rather than bringing messages from Ottawa back to locals. Her goal is to include as many people in the political discussion as possible, in order to restore Canada’s robust democracy.

“I think voter disillusionment and disengagement is one of the greatest threats to our democracy,” she explained. “I would love to see a strong voter turnout, I would love to see… that young people vote, and see all parts of our community make informed decisions, and to ensure that their voices are heard.”

Even if she isn’t elected in October, Wilson-Raybould said her community involvement in Vancouver Granville will continue. Until then however, she and her team will keep knocking on doors, “bound and determined,” as she puts it, to engage the voting public in one of most critical elections in Canada’s recent history.