You probably don't  associate strip clubs with high quality food, but the food program is light years ahead of the straight-off-the-Sysco-truck menus of similar establishments. The sausages, especially, are worth it. 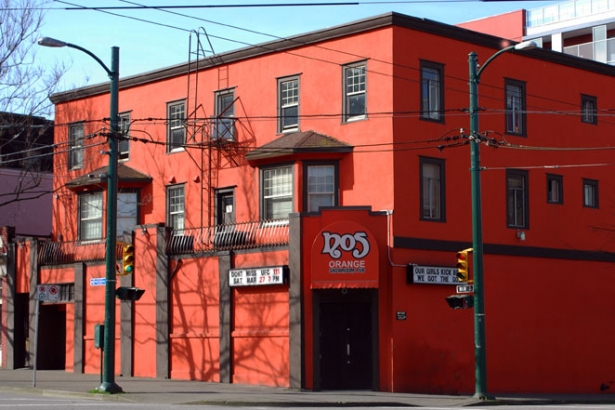 No one was more surprised than I was when Fiona Grieve, the owner of the hot West End BBQ restaurant Buckstop, chose The No 5 Orange as one of her Top 5 Restaurants in Vancouver. For those of you who are unaware, "The Number 5", as it's more commonly known, is one of Vancouver's few remaining venues that feature adult entertainment. In other words, it's a strip club and most of us don't associate strip clubs with high quality food. But, based upon Fiona's recommendation, I decided to investigate.

Stu Irving (formerly of Wild Rice and The Diamond, now at Cuchillo) is responsible for the Fall 2013 menu upgrade. Although Stu doesn't man the grill, his influence lingers. The menu has lost some of his more creative introductions, (apparently Japanese wasabi dogs with shredded nori and ponzu mayo aren't very popular with strip club patrons -- who would have seen that one coming?) and the prices have increased, but the food program is light years ahead of the straight-off-the-Sysco-truck menus of similar establishments. While some items are overpriced ($19 + tip for a burger and a beer is a lot to pay in the DTES), the sausages are worth it. The jokes just write themselves.

The highlight of the menu is the Bratwurst Reuben Dog. The sausage is rich and succulent and comes smothered in perfectly prepared sauerkraut, swiss cheese and mustard.

And what of the "ambiance"? Well, there's no escaping the fact that you are dining in a strip club. 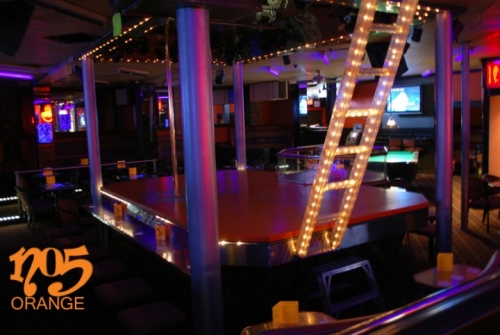 The decor at Number 5 doesn't detract from good food options.

It's very dark, the music is loud and unfailingly terrible and your waitress will ask you to pay for your food and drink when it arrives at your table. That said, the service is genuinely friendly, the atmosphere is  surprisingly non-threatening, even for female patrons, and the bathrooms are cleaner and more modern than many "upscale" restaurants I've seen.

There are even plenty of tables where you can sit with your back to the stage if you're not even the least bit tempted to watch the dancers perform.

If you find yourself in the DTES around lunchtime, the No. 5 is a perfectly good choice. You will get a satisfying meal and you will leave with a great story to tell your co-workers that afternoon.