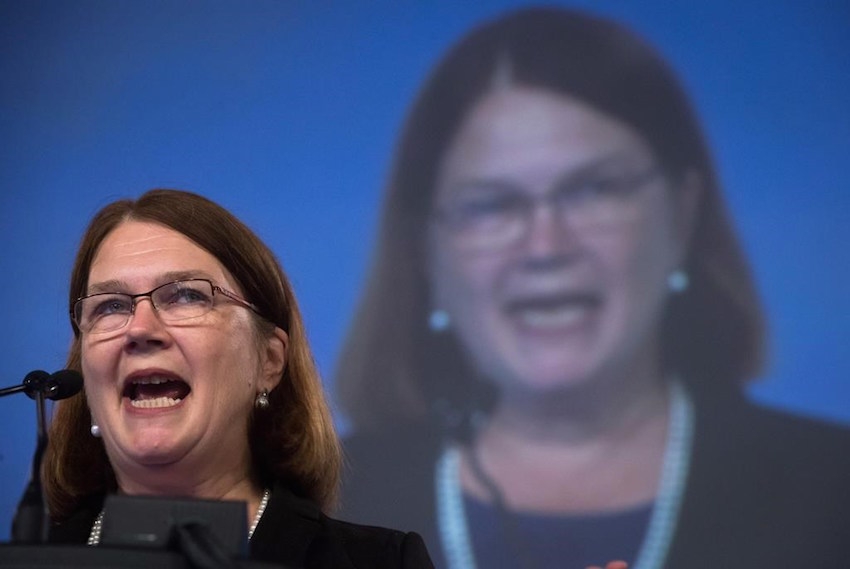 Canada needs innovative solutions to improve home and primary health care so it can match other countries including Britain and Australia, which have overcome similar problems by spending less money, Health Minister Jane Philpott says.

It's a myth that Canada has the best health-care system in the world, she told the annual meeting of the Canadian Medical Association on Tuesday.

"We spend more per capita on health care than many other countries. What's worse is while we do this we get poorer outcomes for our patients."

Philpott, a former family doctor in Stouffville, Ont., said it's not the quality of health care that needs to be addressed, but the way in which it's delivered while the federal health-care budget has ballooned to historic highs.

Britain and Australia are spending less per capita and as a percentage of GDP because they have done a better job of co-ordinating care, Philpott said.

Ongoing talks about a new health agreement with the provinces and territories is an opportunity to set health care on a new course and to move "from the middle of the pack" compared to other countries, Philpott said.

"There is so much more that can be done to improve access to home care," Philpott said, adding $3 billion will be spent over the next few years to address the pressing need.

She said solutions can be found in encouraging better collaboration between family doctors and specialists, using digital technology to keep records and sharing information that patients can access, and giving greater priority to the social factors that affect health, particularly among aboriginal Canadians.

Philpott drew applause from association members Tuesday when she said social inequity is the biggest barrier to improving health care.

"The most perverse inequity is among aboriginal communities," she said.

"It's far past time for us to do something about this."

Canada's health-care infrastructure also needs to be modernized, allowing patients to access their health-care information on their phones, she said.

"We still use fax machines in doctors' offices and most Canadians can't go online to get any of their health information," she said, adding it's common for patients in the United States to get their test results through an app.

"In Canada too, we need to have digital systems that are easily accessible by patients and providers and help patients to be active partners in managing their care."

Last month, Philpott announced a system in Nova Scotia that will enable patients to access their test results by phone.

She said negotiations on a new health-care agreement are an opportunity to "trigger" the innovation needed to fix the system, telling doctors that those who think Canada is stuck with its current system are wrong.

The association has identified securing the resources needed to care for the country's aging population as a pressing need in a new health accord. It has developed several recommendations it would like to see in a new deal, including more funding for provinces with larger populations of seniors, coverage of prescription drugs, and funding for long-term care, home care and caregivers.

Philpott said suggestions that the aging population will overwhelm the system is another myth facing health care in Canada.

She said part of the solution can be found in Ontario, which spends $55 a day to provide a person with care in their home. With seniors and their families preferring treatment at home, more needs to be done to achieve that goal, she said, adding that despite the cost efficiency only about five per cent of provincial health budgets go to fund home care.

Philpott told reporters after her speech that the issue of opioid overdoses and deaths is an escalating problem in several provinces and that the government has taken several steps to deal with it, including addressing access to unnecessary opioids.

She said the government will hold a summit in the fall and bring together "a very large number of stakeholders to talk about the opioid crisis. It is a pressing health matter in this country and we will be a part of that."

Palliative in BC: a daughter's view of the health care system