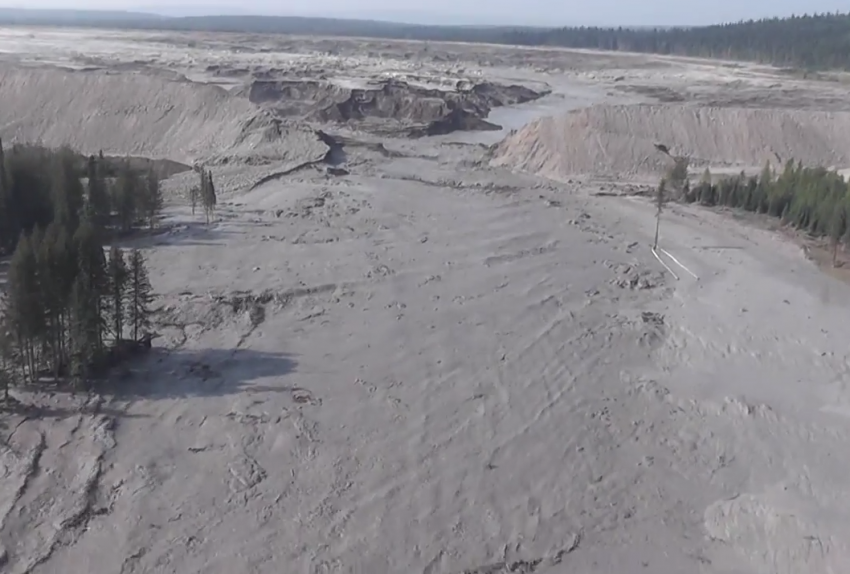 Mount Polley mine spill at the convergence of Hazeltine Creek and Quesnel Lake.

“It’s hard to deal [with] and treat something if you don’t know what it is,” Richard Holmes, fisheries biologist with Cariboo Envirotech, said in an interview at Mount Polley Mine, home to the tailings pond that breached August 4, sending an estimated 14.5 billion litres of mining waste into the local environment, including Quesnel Lake, a major source of drinking water in the Cariboo region of B.C.

“At this stage the impacts on Quesnel Lake are virtually unknown,” Holmes said.

Very little is known about the significance of the accident, although it has been nearly three weeks since the spill, one of the worst environmental disasters in B.C.’s history, that sent the Cariboo region into a state of local emergency.

Last week authorities rescinded a broad drinking water ban that prevented residents from bathing in or drinking the water, or eating locally caught fish. A partial drinking ban remains in place for the immediate region of the spill, including Polley Lake, Hazeltine Creek and a one hundred metre zone surrounding the spot where the billions of litres of tailings waste poured into Quesnel Lake.

It is this particular area, where sludge from the spill sits slumped into Quesnel Lake, that is of concern to Holmes.

“One of my concerns as a fisheries biologist is the sediment that’s currently located at the mouth of Hazeltine Creek and in the bottom of Quesnel Lake,” he said. “What efforts have been made to characterize that, as far as size is concerned?” Holmes asked.

He said the company that operates the mine, Imperial Metals, is still draining water from Polley Lake into what remains of Hazeltine Creek.

“There’s still some polluted water that is going to be drained into Quesnel Lake,” he said.

Currently Holmes is involved in talks with Imperial Metals and the Soda Creek First Nation, a local band that wants to play a role in clean up and remediation.

Imperial Metals should at least send down some underwater cameras to get a sense of the size of the spill underwater, Holmes said.

That could help establish “what impact the spill has had on the bottom of Quesnel Lake,” he said.

“There’s certainly the global technology available to do that.”

As of Thursday last week the B.C. Ministry of Environment did not have a plan in place to begin clean up of the spill site.

“I think they should put every effort they possibly can into fixing this situation up,” Holmes said. Bev Sellars, chief of the Xats'ull (Soda Creek) First Nation, said her community isn’t expecting to feel the full effects of the spill until years down the road.

“This is the biggest salmon run in years,” she said. “And [the salmon] are going to have to swim through that sludge or around that sludge to get to the spawning grounds.”

“Four years down the road we’re going to see the effect that has,” she said. “This is huge and going to affect us for years to come.”

Although Ministry of Environment testing showed contaminants in the water were no higher than historical levels, some local residents said they will not return to drinking the water yet.

Coralee Oaks, MLA from the Cariboo region and minister of community, sport and cultural development, said she understands lingering concerns.

“First of all I absolutely understand the concerns and that’s why the province and the company are going to continue doing the testing. First Nations are also doing their own independent water testing,” she said.

Sellars said the Soda Creek First Nation is pulling together resources to perform independent water testing because her community does not trust the B.C. government or Imperial Metals.

“We’re not accepting [Imperial Metal’s] or the government’s tests right now,” she said, adding there is “definitely a lack of trust” surrounding water safety.

Oakes said she can understand the lack of confidence.

“I understand what the people are feeling,” she said.

“It’s going to take a long time to regain trust and confidence. That’s why we have to work very closely with the community, making sure that we’re here regularly, talking with the community to ensure that slowly we rebuild that trust.”

Oakes also said the company is responsible for funding cleanup efforts, something local residents have been concerned about. “It is the company’s responsibility,” Oakes said.

“It is their responsibility to ensure that cleanup happens in the community and they’ve assured us that their insurance and the size of the corporation that it is, they will be able to financially cover those costs.”

Environment Minister Mary Polak also stated B.C. has a “polluter-pay model” in place and that British Columbians “can expect the company will be the one paying for the cleanup and recovery.”

Although critics are expressing concern that a combination of high cleanup costs, an Imperial Metals shareholder lawsuit and potential personal suits could leave the company unable to pay.

Imperial Metals president Brian Kynoch indicated the company is relying on profits from other mining projects to fund cleanup efforts.

“If it’s $400 million, then we are going to have to get mines generating to make that money to do the cleanup,” he said.

For Richard Holmes, however, it’s too late to shirk responsibility.

“If cost is an issue than perhaps they should never have had this mine open here,” he said.

This article is part of a joint venture between the Vancouver Observer and DeSmog Canada.