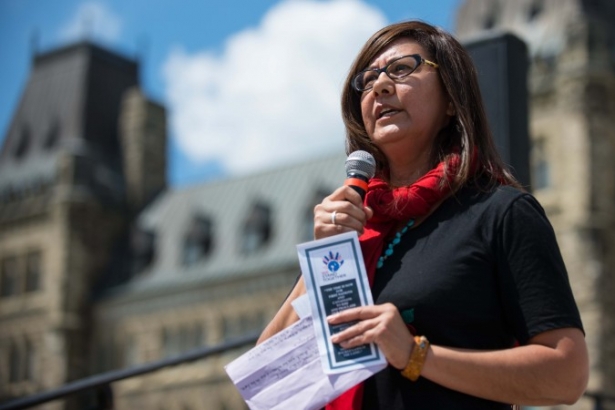 Brenda Sayers addressing a crown on Parliament Hill during her tour to raise support last August. Photo by Matthew Little, courtesy of B. Sayers.

The Hupacasath First Nation may not have succeeded the first time around, but its fight to keep the federal government from ratifying the Canada-China Foreign Investment Promotion and Protection Act (FIPPA) is heating up again.

The tiny Vancouver Island nation has filed an appeal with the Federal Court of Appeals and expects the Crown to file by March 17.

The appeal of last summer's decision is being made on twofold grounds: first, that Chief Justice Paul S. Crampton failed to appreciate the impact the treaty would have on the Hupacasath's right to self-government, and second, that the court didn't apply the correct legal test when determining when the duty to consult is triggered, effectively setting bar too high.

“This is an incredibly important case for First Nations in that no court has ever ruled on when and how the Canadian government is required to consult with First Nations on international treaties,” said Brenda Sayers, a Hupacasath band member and one of the organizers who initiated the original court challenge.

“When NAFTA was signed back in the 1990s, Aboriginal law wasn’t as advanced as where we are today,” she said, citing the landmark 2004 court case Haida Nation v. British Columbia, in which the British Columbia Court of Appeal decided both crown and corporation have a legal duty to consult with First Nations on projects that stand to affect them. “Once that decision was made it really blew the door open for First Nations to protect their traditional territory.”

The Canada-China FIPPA, Canada’s largest international trade agreement since NAFTA, would allow China to sue Canada for loss of profits if it did anything to hinder Chinese state-run companies’ development plans, such as honouring First Nations’ rights and title over foreign companies’ claim to land.

Once again with the help of Leadnow and Council of Canadians, the Hupacasath have raised $228,000 in support of the case. About $110,000 will go to paying the Crown’s legal fees as ordered by the Chief Justice, and the rest will be used to fund the appeal. The nation has the support of more than 30 organizations across the country, including UNIFOR and the National Farmers Union.

Hupacasath elected chief Steven Tatoosh said he had no idea how big the case would get when they started.

“When his trade agreement came across our desk we though it was important to protect the resources within our own territory we didn’t ‘realize how global it would get.”

Tatoosh, one of only three members of council, said that while the work remains community-driven, he said, the goal to send a broader message to Canada that it must respect the authority and stewardship of all First Nations over their territory, regardless of size.

“We don’t want Chinese companies to have more rights than individual Hupacasath citizen in our own territory.”

He added that the nation never considered backing down after the initial challenge failed.

“We’re not scared to take it to the extreme limit to protect our land.”