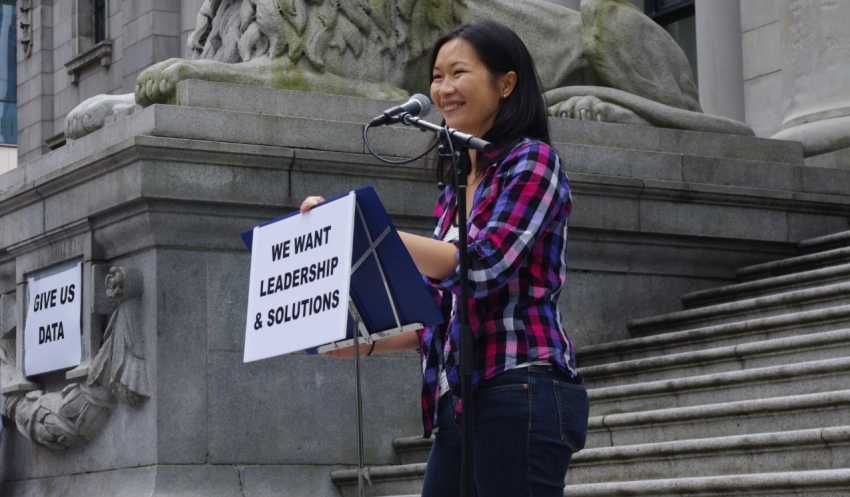 “How can we be expected to compete for homes, condos and houses with the globe’s millionaires and billionaires?”Eveline Xia asked a crowd of several hundred gathered at the Vancouver Art Gallery on Sunday.  The crowd included community groups and advocates who called for government action to address unaffordable real estate in Vancouver.

In March, Xia posted on Twitter the hashtag #Donthave1million to express her frustration about the crisis in affordable housing that has been creeping up the income brackets and affecting full-time professionals who can't afford to stay in Vancouver.

The tweet received a bevy of support and commiseration from people struggling with how to live in a real estate market that has shot up astronomically in recent years. More than 24,000 people have signed an online petition calling for restrictions on foreign ownership in Vancouver.

In her speech, Xia addressed the complex gamut of issues affecting real estate in the city, from family-oriented urban planning, to the lack of data on real estate investment.  She also addressed  the racist undertones in the criticisms that Chinese immigrants are the problem.

“It’s not about race. It’s about a broken system that treats homes like the stock market and completely removes the people and the community from the equation,”  Xia said.

David Eby, the NDP housing critic and a vocal supporter of the #Donthave1million organizing, said he worries that without action the current situation could lead to Vancouver becoming a “gated city,” in which the diversity needed for a health community wouldn’t be able to thrive.

“Vancouver has a long history of interventions in the housing market to make sure the city remains affordable,”  Eby said, citing the West End and False Creek as examples of successful projects to develop rental properties and diverse communities.

Many at the rally, diverse in age, worried what it would mean for young families to remain in Greater Vancouver.

Emily McGloin, 27, rents with her husband in the Fairview neighbourhood. McGloin, who works in occupational health and safety, doesn’t believe that staying in the city is a reasonable goal.

“With the way prices are… there’s just no point,” she said. She added that she’s not given up completely, but expects that in the near future she will find work in the Fraser Valley, where housing prices are more affordable.

McGloin is only one of many young professionals  debating whether the perks of Vancouver outweigh what many view as a density geared toward one-bedroom condos and the exceptionally wealthy.

“If I ever want own a home or have a family, I cannot do it in Vancouver,” McGloin said.