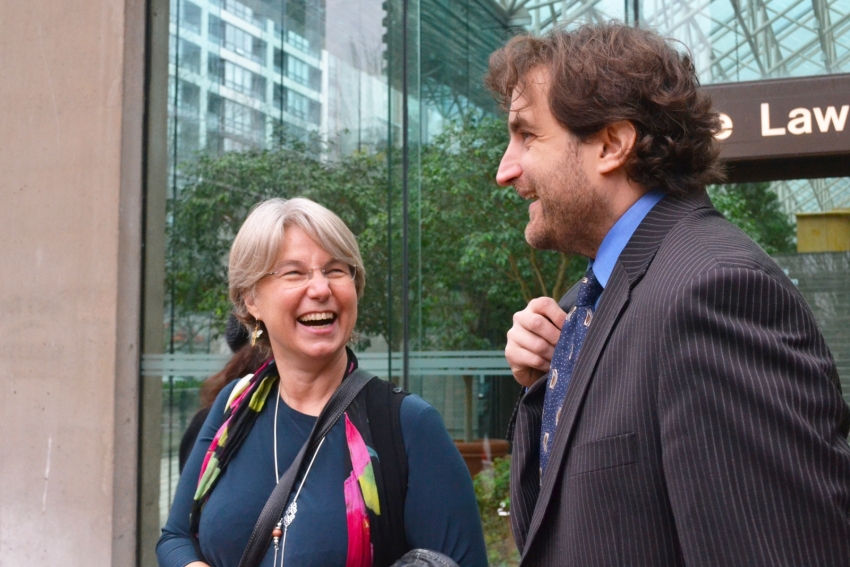 SFU professor Lynne Quarmby with her lawyer Jason Gratl celebrating a ruling, outside the B.C. Supreme Court on Thursday. Photo by Jenny Uechi.

SFU molecular biology chair Lynne Quarmby beamed widely as Justice Austin Cullen announced at the B.C. Supreme Court that Kinder Morgan's request to extend the injunction date would be rejected, and said all charges of civil contempt for protesters arrested so far on Burnaby Mountain would be thrown out.

"It's fantastic!" Quarmby said, moments after the judge announced his decision. "It's a fabulous victory."

"Trans Mountain's incompetence showed up very clearly in the court today...it's a shame you have to be fighting this battle on this level because of laws put into place in an omnibus bill in 2012. Laws that were favouring oil companies, removing all consideration of environmental concerns. All because of those, I've been fighting on the front lines."

Justice Cullen's ruling did, however, allow Kinder Morgan to substitute its current injunction zone, which was not accurate, with the correct one.

The ruling was a big blow to Kinder Morgan, which was applying to both to expand its current injunction zone (which turned out to be "not even overlapping", according to Quarmby, with the police line) and the injunction deadline to December 12. Now, Kinder Morgan must finish its work and leave by December 1.

The judge ruled it was "not necessary" for the company to stay on the mountain past December 1, given that Kinder Morgan already sent a letter to the NEB confirming it "has been able to obtain a sufficient level of information from geotechnical and engineering studies to meet the Board's information requests for the proposed revised pipeline corridor and related to the method of construction" (letter below).

"It was unfortunate the situation on Burnaby Mountain led to arrests," Kinder Morgan told The Vancouver Observer in a statement. "We respect the court's decision related to the charges. We did not have intention of pursuing damages." The company also said it was willing to work with the City of Burnaby to restore any damage its work caused to Burnaby Mountain.

Burnaby Mountain has become the site of worldwide media attention this month, with over 100 citizens ranging from university professors to prominent First Nation leaders to retired seniors getting arrested to protest the injunction that Kinder Morgan has imposed in order to drill boreholes on the mountain. According to the CBC, the cost for RCMP and other police to work on Burnaby Mountain has been more than $100,000 per day, though this is not confirmed.

During the break prior to the decision, Quarmby -- who was recently slapped with a lawsuit by Kinder Morgan -- said she was concerned about details in revealed in court regarding the pipeline expansion.

"I wanted our public to recognize the extreme injustice happening in the degradation of the regulatory process. This was really apparent this morning as we saw all the...incompetency demonstrated by (Kinder Morgan) Trans Mountain. If they can’t even get GPS coordinates right, how are we going to trust them to ship oil through our port without an accident? They’re not giving much consideration to the public."

When asked about her own protest activities, getting arrested on Burnaby Mountain recently for crossing the injunction zone, she stressed that it was not something she ever 'wanted' to do.

"I certainly did not want to be arrested," Quarmby said. She told reporters that she still had the multi-million dollar lawsuit by Kinder Morgan hanging over her, and that there was no way the company could compensate for the month of turmoil and stress that the lawsuit had caused.

The handful of protesters with Quarmby, including Voters Taking Action Against Climate Change spokesperson Kevin Washbrook, cheered with her.

"What this proves is that the court system works," he said. "Some people said the police were being Kinder Morgan's private security, about the courts working for Kinder Morgan... but that's not true, they work for all of us."

Correction: A previous version of the story said the ruling allowed Kinder Morgan to expand its injunction, instead of substituting it. This was corrected and updated at 4:55 p.m.

with files from Jackie DeRoo