What kind of image do the federal candidates want to transmit through social media? Check out what we found out 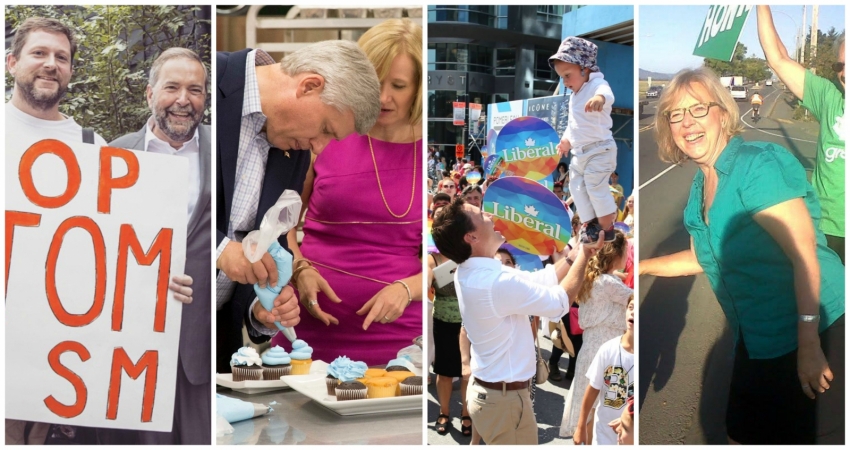 Prime Minister's Stephen Harper's Facebook was not considered a relevant tool for promotion until recently.

As the following timeline shows, in the past year his social media team didn't bother to post anything related to his activities on Facebook for a couple of months. However, as soon as the campaign for Canada's 42nd election started, the platform became a central stage.

But what does Stephen Harper show on Facebook? Excluding partisan messages, his photos tend to include male politicians and military personal, mostly Caucasian people, and the prime minister as the main focus of the images, many times just posing by himself.

As October 19th approaches, the PM's social media team switched strategies and decided to showcase the PM's softer side.

The NPD leader's social media team has been non-stop throughout the year. They've stroke a balance between Mulcair's partisan activities and his personal life.

When it comes to public events, Mulcair is usually shown around many people from different backgrounds. His wife Catherine Pinhas tends to be by his side.

The Liberal Party's leader social media presence has also been consistent throughout the year. His social media team posts a few pictures ever day, and the posting frequency has increased as the campaign has entered its final stretch.

Trudeau is usually showcased while advocating for First Nations issues and at high-level meetings. Although analysts have described him as a people's person, only until recently he is shown at massive events. His children tend to be with him, but his wife Sophie Grégoire is usually hidden from the public eye.

Elizabeth May's Facebook activity needs some work. Only in the past days post-frequency has increased, but the platform was 'abandoned' for a few months in the last year.

In general, photos lack quality and many of them do not focus on the Green Party leader. Her political activities, rather than her personal life, are at the centre of her social media presence.

In terms of topics, by looking at May's Facebook people can really tell that both the environment and women's issues are her top priorities. She also seems to be catering to senior citizens.