“A lot of people who have been thinking about voting for the Liberals and the Greens might reassess their votes and look at Mulcair as the best alternative to topple the government.” — Mario Canseco, Insights West 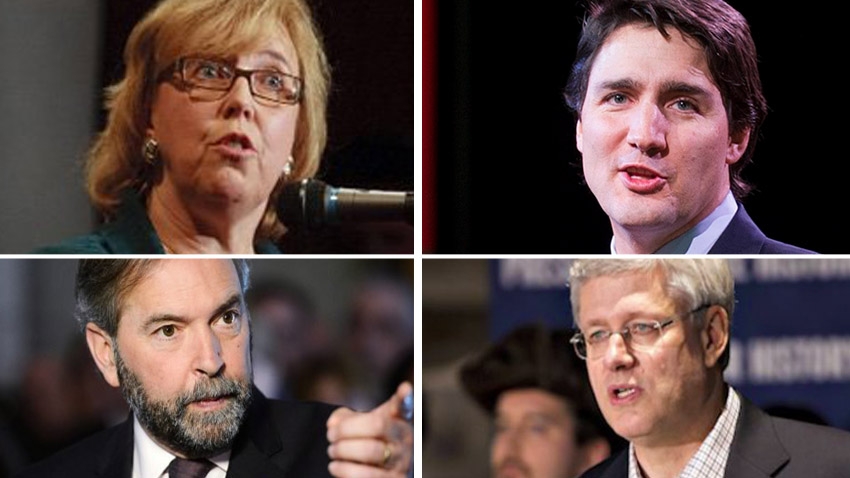 The four federal party leaders have a long campaign ahead of them — the longest in the nation's history. Vancouver Observer graphic

It’s still early in the polls, but so far it looks like B.C. may host some of the most competitive party races in the country.

According to the most recent data from threehundredeight.com, the NDP lead in B.C. with just over 40 per cent support, followed by the Conservatives at 27.7 per cent, and the Liberals at 23.2 per cent. The Greens trail in fourth with 7.9 per cent.

Anything can happen between now and the Oct. 19 election date, but pollsters and academics are advising B.C. voters early that every seat will count for those hoping to unseat the Harper government.

“It’s a very different ball game for the Conservatives from what we saw in 2011,” said Mario Canseco, vice president of public affairs for polling company Insights West.

“The fact that the NDP has peaked so soon might mean a lot of people who have been thinking about voting for the Liberals and the Greens might reassess their votes and look at Mulcair as the best alternative to topple the government.”

British Columbia now has 42 ridings, up from 36, and a number of two and three-way races have already propped up in the Lower Mainland.

Voters will have to monitor these ridings and pick their party carefully, according to UBC political science professor Maxwell Cameron.

“The challenge for voters who want Harper out is to figure out which party has the best chance of beating the Conservatives,” he explained.

Collaboration is complicated task in a three-party system however, and a divide in the opposition vote could result in “real penalty” for Harper opposers, he said. If voters split their ballots between the NDP and the Liberals, the Conservatives could squeak in with another majority.

“At this point that decision is being made a little bit easier by the direction the polls are going, which give the NDP a significant lead over the Liberals,” he said. “But there are lots of interesting ridings — probably a good eight to 10 that are going to be really hard to predict.”

Eyes on the ridings

It’s especially important to keep an eye on the potential swing ridings, said SFU political science professor Cara Camcastle, and not to fall into the trap of paying attention only to the party leading provincial polls.

“The danger is the bandwagon effect,” she told the Vancouver Observer. “They’ll strategically vote for the NDP since the NDP are doing well provincially and nationally, but they may not be the strongest in that particular riding.”

“It’s very hard for an individual voter to know the trends in their individual riding, but it may appear on the surface that overall, the NDP are going to win.”

Earlier this week, the Victoria Times Colonist published a comprehensive list of B.C. ridings to watch out for, but five ridings came up consistently noteworthy in Vancouver Observer interviews with academics from UBC, SFU and UVic.

Projections made by polling aggregator threehundredeight.com