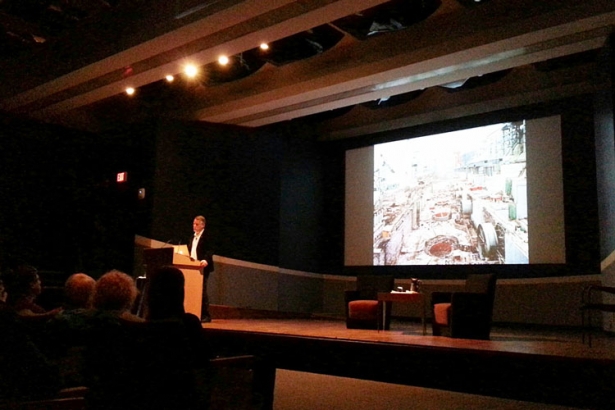 Last September, I had the opportunity to attend the 2013 Transportation Forum in Anaheim, California. The trade show targeted trucking fleet managers in the transport and logistics industries and offered a trade show floor for shmoozing and various guest speakers for edumacatin’ the trucking managers. While there, I attended University of Houston Chemical and Bio-molecular Engineering professor Dr. Michael J. Economides’s talk “Natural Gas: Future Premier Fuel of the World Economy”. While he sang the praises of natural gas, he dismissed out of hand wind and solar power as not providing enough energy to meet growing global energy demands.

I couldn’t blame any of the speakers there for their upbeat enthusiasm for global logistics. I mean, set in Orange county—a suburban moonscape of expressways, freeways, and shopping strips stretching to every horizon with Disneyland at its centre—a rosy utopia of happy (albeit cartoonish) neighbours strolling walkable neighbourhoods fenced inside a protective cocoon of smiling security guards, this backdrop of endless growth seems, well, almost believable.

After the talk, the conventioneers piled into several dozen air conditioned buses and were ferried from the Anaheim Convention Center across the street to meet with Mickey and Goofy, and enjoy a feast sumptuous enough to put royalty to shame. As I walked along the deserted sidewalk to avoid the long bus queue, I couldn’t help but reflect that Economides did indeed have a point: to sustain this kind of infrastructure, most alternative energy sources won’t scale up. But what he didn’t offer was how to rethink our infrastructure. Why would he? He’s on the payroll of some of the world’s most powerful oil and gas corporations.

On Friday (March 14), last year’s trucking trade show finally met its match, and it came from the most unlikely of quarters—the arts. Edward Burtynsky, the Toronto-based photographer who’s been capturing the terrible beauty of strip mines, oil fields, urban sprawl, hydro electric dams, and other marks on the landscape is showing us the truth of what this infrastructure is costing us.

In a packed room at UBC’s Robson Square, Burtynsky seemed humbled before his own staggering works. Part lecture, part slide show, Burtynsky’s presentation allowed us to glimpse the impacts of the good lives we’ve been leading for the past century and half since fossil fuels began to emerge as synonymous with modernity. From shipbreaking in Bangladesh to chicken processing plants in China to oil spills in the Gulf of Mexico, these images paint a world of staggering proportions and eerie beauty. In describing it all, Burtynsky said matter-of-factly, "We're a rogue species” while never actually pointing fingers—there’s an admission that we’re all culpable in creating these landscapes.

Burtynsky spoke of how Canadian consciousness (particularly because of our sense of The North), is intrinsic to our care for the environment, but also to our denial about what’s going on in the rest of the world—particularly when it comes to water. Most of our rivers still flow free into the sea, but the Yangtze in China or the Colorado in the US and Mexico, the water is usurped almost entirely before it reaches its own delta. The sacred Ganges may join that list in the coming decades. "We as humans are usurping nature", said Burtynsky adding, “Mines form a huge part of the Canadian economy”, making it clear that we have our own terrible beauty.

Burtynsky spoke mostly as an artist and left the environmental discourse to be forwarded by his co-speakers, William Rees and Wade Davis, both professors at UBC. Rees spoke of Burtynsky’s work as a “merging of art and science”. As terrible as it may sound, Burtynsky’s work is indeed beautiful—at least artistically. In the 18th and 19th centuries, painters such as Constable or Turner sought to awe the viewer through their depictions of nature; Burtynsky brings the subjection of nature by man as the source awe.  Burtynsky’s signature quote describes it best: "We took what we needed from the Earth and this is what we left behind”.

So, if you visit the Vancouver Art Gallery to see his exhibition, "A Terrible Beauty: Edward Burtynsky" (running March 1 to May 26, 2014), balance your shock of photographs such as “Alberta Oil Sands #14, Fort McMurray, Alberta, Canada, 2007” with the artist’s eye that, in his words is about “walking and looking and waiting for that central moment”.