Harper's favourite "banned artist" back in Victoria for art exhibition

The Real Poop on Social Change is an event about using art to speak truths that society (and the Harper government) doesn’t want to hear. 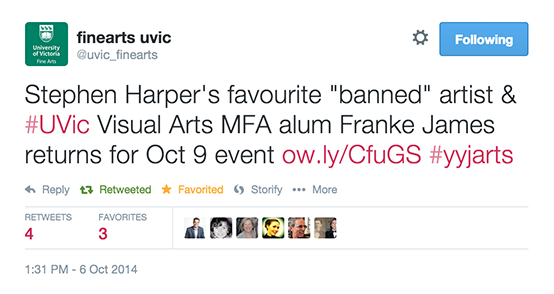 UVic’s tweet about me being “Harper’s favourite ‘banned’ artist” is a funny twist on what actually happened to me when I poked, prodded and challenged our Dear Prime Minister.

The Real Poop on Social Change, an exhibition of my work, opens tomorrow, October 9th in Victoria. The show is all about change. It’s about using art to speak truths that society (and the Harper government) doesn’t want to hear. It’s about using art to raise awareness (CO2 is toasting the planet) and thereby inspire social change (we need to shift away from fossil fuels and build clean energy infrastructure).

The Real Poop show is also about laughing in the face of a fossilized government that thinks it can censor art by stopping an art show in Europe — and how an artist (me), supported by crowd-funding, can take that same art and post it on bus shelters in Ottawa, Calgary, Halifax and even Washington DC — and online on social media, and make news around the world. It’s about telling the story of being censored in a book (Banned on the Hill), winning three awards, and then sharing the government’s secret censorship techniques at foreign book shows in Beijing, China and now at the Frankfurt Book Fair, in Germany. In short, it’s about censorship backfiring and amplifying the message tenfold.

Art has the power to change if we free it from the confines of gallery walls and put it to work.

The party on October 9th at the Dock is an opportunity to talk about making society change — when society really doesn’t see any need to change. And the powers-that-be and vested interests certainly don’t want to change. And who the hell are you to tell us we need to change anyway?

Yep. That’s what change-makers face when we stand up and speak truths that society doesn’t want to hear.

But making change happen is also about enlightened policies

Like the 1978 Pooper Scooper Law in New York. Way back then, NYC saw that it had a human health problem caused by dog-owners not picking up after their pooches. Many people scoffed at the idea. The naysayers said no one will pick up dog poop. But they were wrong: “a combination of science and politics, fact and fear, altruism and self-interest led to the adoption and enforcement of legislation that became a shining success”. For me, the Pooper Scooper Law is one reason why we can be optimistic about social change. After all, if people can be convinced to pick up dog shit, who knows what social change is possible? Really. 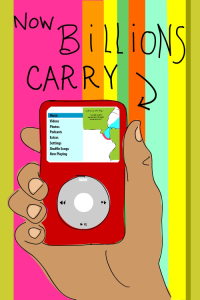 Society is shifting all the time. With the right policies and social awareness (which is where artists can help) we can inspire massive behavioural changes. Thirty years ago everyone threw stuff in the landfill. Now, most people recycle a large percentage of their waste. That’s progress. Thirty years ago everyone listened to music on vinyl albums. Now many, many people carry music around with them on handheld devices. That’s not just a technological change, it is a massive behavioural change.

The Real Poop on Social Change is all fodder for the evening’s discussion about making social change happen. I will be joined by Charlotte Kingston, BC Civil Liberties, Carol Linnitt, DeSmog Canada, and Dr. Thomas F. Pedersen, PICS,The Pacific Institute for Climate Solutions in saying a few words about the power of art to accelerate positive change — and why we need to vigorously protect our Charter right to free expression. Because it is only by raising our voices and clamouring for change that we can wake up the silent majority — and make them want change too.

Over 30 of my ‘social change’ artworks are being shown at the Dock on October 9th. Come and see the art that Harper inspired. Chat about social change with all of us — and get inspired to speak up and make change happen.

See more
What can Anybody tell Obama about the Keystone XL?