'Even in areas where the Conservatives are doing well, there’s this concern about the environment.' — Mario Canseco, Insights West 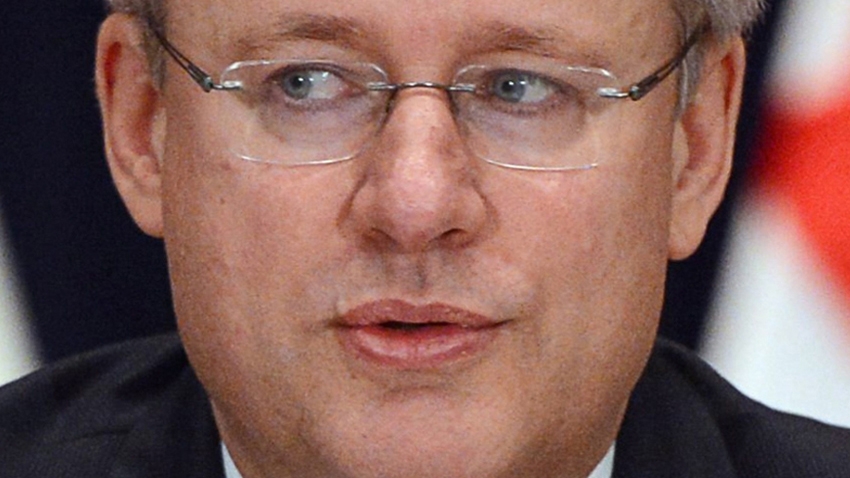 Should this man be worried? New poll numbers show Harper is struggling, even in Conservative strongholds.
Results of polling in four key British Columbia ridings suggest support for the governing federal Conservatives may be buckling in the province as widespread unease with oil tankers takes hold, according to an Insights West poll published Friday.
The NDP surge seen in national polls is borne out by significant voter support for Tom Mulcair as prime minister, even in traditionally Conservative ridings where a full-throttle three-way race is complicated by strong support for the Green Party.
According to the poll commissioned by the citizens’ group Dogwood Initiative, Conservative candidates now trail their rivals in all four selected ridings, although the races are tight on the North Shore. Three Conservative incumbents who had garnered over 42 per cent of the vote in 2011 are currently polling below 25%. The Liberals lead the Conservatives in the three urban ridings, while a fourth and newly distributed riding in South Okanagan West Kootenay has the NDP far in the lead. The undecided vote ranges from 21-30 per cent in the four ridings. 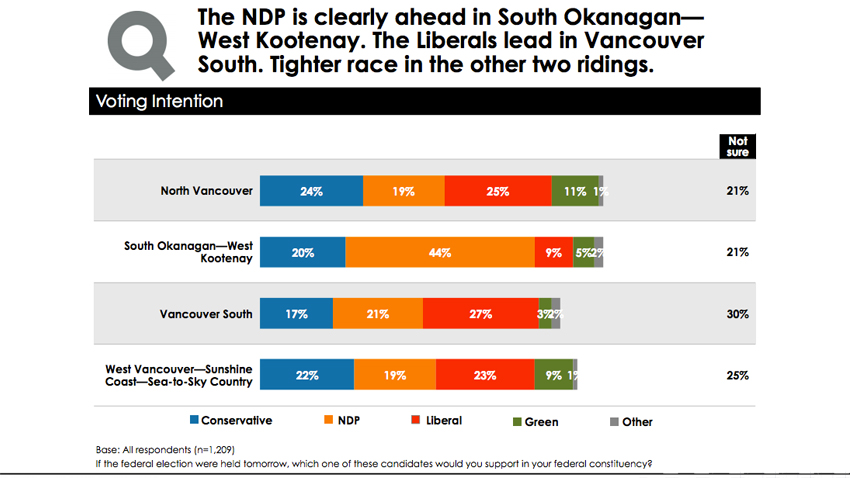 Only 20 per cent of respondents support the Conservative candidate in the newly formed riding of South Okanagan West Kootenay, where the NDP hold a commanding lead at 44 per cent. Support for the Conservative incumbent in Vancouver South has collapsed to 17 per cent, where the Liberal candidate holds a significant lead. No NDP candidate has yet been nominated for the riding.
NDP leader Tom Mulcair is the preferred prime minister in three of the four ridings, including North Vancouver and the affluent West Vancouver Sunshine Coast Sea-to-Sky.
Reached by the Vancouver Observer for comment, Mario Canseco of Insights West expressed caution as the election is still months away. Still, he points to the results on the preference for prime minister, which indicate an electorate that is on the move.
“Even Layton in the final weeks of the campaign, the closest he got to Harper was about three or four points,” said Canseco. Such results suggest that the campaign may "become less an issue of ideology and more a referendum on who (Canadians) want for their prime minister.” 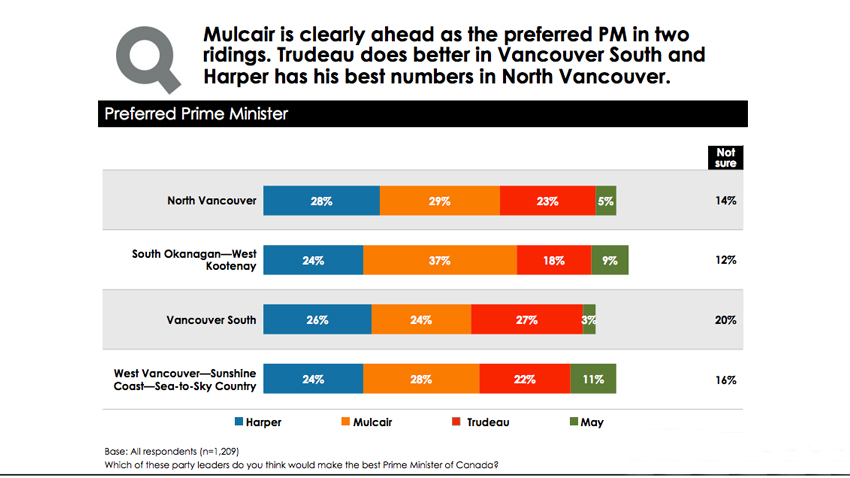 Canseco also notes the widespread concern over additional oil tankers in British Columbia as a potentially important signifier.
“Even in areas where the Conservatives are doing well, there’s this concern about the environment," said Canseco. "It’s starting to grow and if more people start to become active in the idea that they’re voting for the environment during the federal election, the chances of re-election for other Conservative incumbents may become slimmer.” 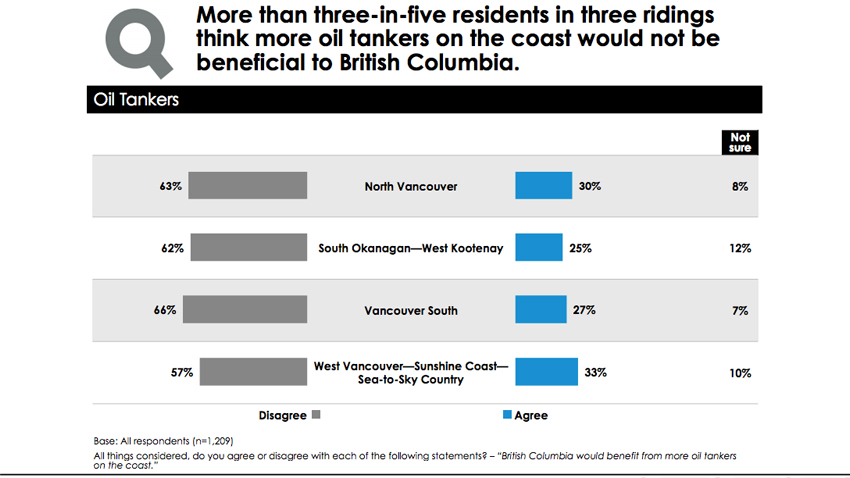 “This is consistent with a pattern we’re seeing all around the province,” says Kai Nagata, Energy & Democracy Director at Dogwood Initiative. “In these battleground ridings, support for oil tanker projects could cost a candidate dearly on election day.”

Dogwood Initiative is B.C.’s largest non-partisan citizen group. Through campaigns like Let BC Vote and Beyond Coal, Dogwood works to give British Columbians greater democratic control over resource decisions.

“We have more than 100 volunteer teams getting ready to crank up voter turnout this fall,” continues Nagata. “We’re not going to tell anyone who to vote for, but we want people to know where candidates stand on these issues, and who’s got a realistic shot at winning.”
Insights West will continue to conduct riding-level telephone polling as the election approaches.
Results in charts are based on an Insights West telephone study conducted from July 3 to July 7, 2015, among 305 adult residents of the North Vancouver riding, 302 adult residents of the South Okanagan—West Kootenay riding, 301 adult residents of the Vancouver South riding and 301 adult residents of the West Vancouver—Sunshine Coast—Seato-Sky Country riding. The data has been statistically weighted according to Canadian census figures for age, gender and region. The margin of error—which measures sample variability—is +/- 5.6 percentage points for each riding, 19 times out of 20.
Read More:
Share on Facebook Share on Twitter