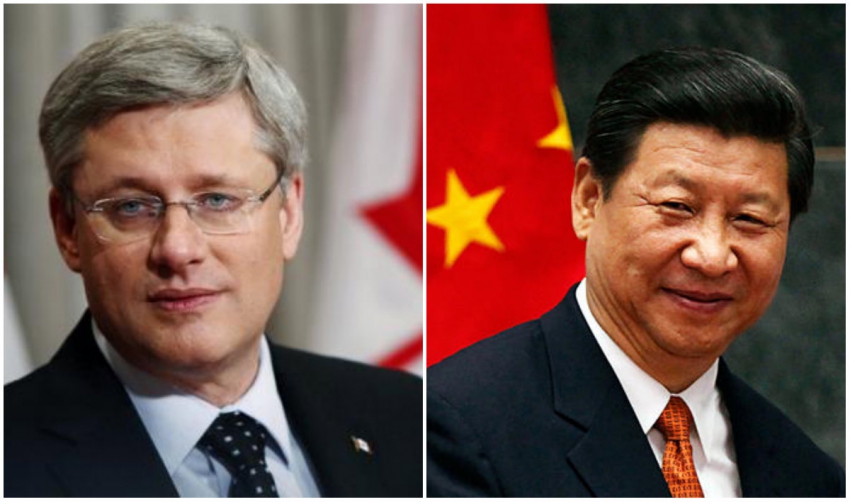 In a short, two-paragraph news release, International Trade Minister Ed Fast said the deal was now ratified. It will come into force on October 1, 2014, and will be effective for 31 years, until 2045.

The original investment protection deal -- which treaty law expert Gus Van Harten said could be in violation of the Canadian Constitution -- was quietly signed in 2012 in Vladisvostok, Russia, but was delayed for two years due to public outcry.

As FIPA comes into force, it would have a major impact on projects such as Enbridge Northern Gateway and potentially some LNG proposals. The deal would allow Chinese investors to sue British Columbia if it changed course on the Northern Gateway pipeline proposal.

"It is true that Chinese investors can sue Canada for any actions by the federal government or the B.C. government (or legislature or courts) relating to Chinese assets connected to the [Enbridge] Northern Gateway pipeline," Van Harten said.

"More troubling, there is no requirement in the treaty for the federal government to make public the fact of a Chinese investor's lawsuit against Canada until an award has been issued by a tribunal. This means that the federal government could settle the lawsuit, including by varying its conduct in a way that many Canadians would oppose, or by paying out public money before an award is issued, and we would never know."

Too late for constitutional challenge now?

Van Harten said there was likely "little point" for constitutional challenges to the deal at this stage.

"Even if found unconstitutional by a court down the road...once the treaty has been ratified, none of the obligations assumed by Canada can be modified unless China agrees," he said.

Op-eds in publications such as The National Post said the China-Canada deal was too one-sided and gave too much power to China. Unlike NAFTA, the FIPA is not a trade deal and would not reduce tariffs for Canadian exports to the Chinese market.

Although proponents argue that the deal would protect Canadian businesses and create jobs, critics say FIPA would be inevitably skewed in China's favour because Chinese investment in Canada is much larger than Canadian ownership in China.

Chinese companies have invested over $30 billion in Canada's energy industry alone. Canadian direct investment in China in all sectors totalled $4.2 billion in 2012.

First Nations argued that the deal was not valid, as it would violate section 35 of the Constitution requiring consultation over projects that could affect traditional territory. The Hupacasath First Nation in B.C. took the federal government to court last year over the FIPA deal, while citizen advocacy groups Leadnow and SumOfUs delivered 60,000 signatures from across Canada in opposition to the agreement. The court decision on the Hupacasath First Nation's legal appeal is still pending, despite the ratification.

“This is a truly sad day for Canada,” said Brenda Sayers, representative of the Hupacasath First Nation. “The people of Canada should be alarmed that our constitutional rights have been stolen from our hands.”

"Today, Prime Minister Harper is showing his disrespect for the legal process by ratifying this agreement before the courts have finished reviewing the case."
Although the Prime Minister has been silent on the deal, Trade Minister Ed Fast said in the news release that FIPA would benefit Canadians.

“Investment agreements provide the protection and the confidence Canadian investors need to expand, grow and succeed abroad," Fast said. "This FIPA will create jobs and economic opportunities for Canadians in every region of the country.”

The NDP and Green Party have circulated an online petition to stop the investment agreement from going into effect.

FIPA could force Canada to keep weak environmental laws: May