An artist, a scientist, and a poet: Hapa-palooza honours Kip Fulbeck, Ann Makosinski, and Fred Wah.

As a child, Makosinski had to build her own toys "with garbage from around the house." The experience had a profound effect on her: rather than hate her parents, she developed a deep love of making stuff. She would dismantle random electronic devices that her dad would bring home. A self-described "weird child", Makosinski would find herself perplexed when her classmates didn't recognize her homemade Alexander Nevsky Halloween costume.

Makosinski said, "Whenever people ask me what my ethnic background is, I always say that I'm half-Filipino, half-Polish, which makes me a perfect Canadian." She added, "I'm also very proud to represent Canada at science fairs and other occasions."

Makosinski was inspired to build the flashlight after returning from a visit to the Philipines. She stayed in touch with friends she had made there, and learned that one of them couldn't study at night because she had no electricity. Makosinski then did what came naturally: build something.

In accepting the Youth Achievement Award, Makosinski said, "To be recognized in my own province means a lot to me."

Makosinski brought the famous flashlight with her.

(I was dismayed to learn that Makosinski has never made the lightsaber noise when testing the flashlight, since she has never seen a "Star Wars" movie. I told her to skip the new ones.)

Living in the hyphen

Anna Ling Kaye said, "When the concept of came up for an awards night, it wasn't really a question: we really wanted to honour Fred Wah."

Canada's fifth Parliamentary Poet Laureate, Wah won the 1985 Governor General's Award for "Waiting for Saskatchewan", and the 1996 Writers' Guild of Alberta Howard O'Hagan Prize for "Diamond Grill", and the 2010 Dorothy Livesay B.C. Book Prize for "Is a Door". In 2013, he was made an Officer of the Order of Canada.

His hallmark is discussing the prickly issues of race and acceptance with a dose of humour; for example, the phrase "If you're pure anything, you can't be Canadian. We'll save that name for the mixed-bloods."

In accepting the Lifetime Achievement Award, Wah recounted his struggle with racial identity during the 1950s. He couldn't just put down "Canadian" on a form, since Canadian isn't a race. His teachers told him that, since his father was Chinese, so must he be Chinese. Then Joy Kogawa's "Obasan", a book about the internment and persecution of Japanese-Canadians during World War II, hit the shelves: "All of a sudden there was a voice for a very ugly thing that had happened in this country's history."

During the next few decades, Wah saw the Canadian literary scene recognize racialization more and more. However, only recently did the concept of Hapa or mixed-race begin to be articulated, and that, said Wah, was because of Hapa-palooza:  "There was this kind of, 'Gee! We are here! That has been such a gift, to have Hapa-palooza."

As part of Hip Hapa Hooray, visitors to the Nikkei were encouraged towards a bit of self-identification and answer the question, "What are you?"

Most participants included aspects of themselves beyond race, such as "mom" or "dancer" or "Canadian. Some sidestepped the question entirely. 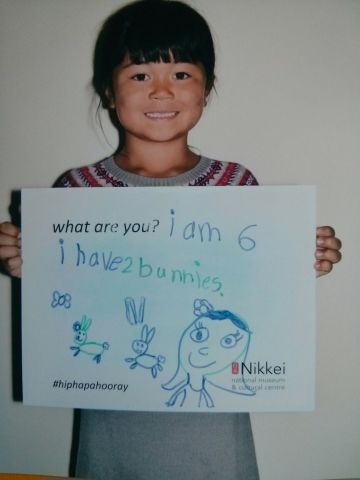 As Kaye had said earlier, the focus of Hapa-palooza isn't on whether you're a quarter-this or an eighth-that; but that ethnic hybridity means that you can inherit the whole of each culture that brought you into the world.

Eventually all of our kids will probably just be beige. Even now, though, Hapa is everywhere if you look hard enough. Kip Fulbeck's subjects don't necessarily look mixed, but they identify as such. More and more, because we're recognizing the vocabulary, we are looking inward and asking the person in the mirror...