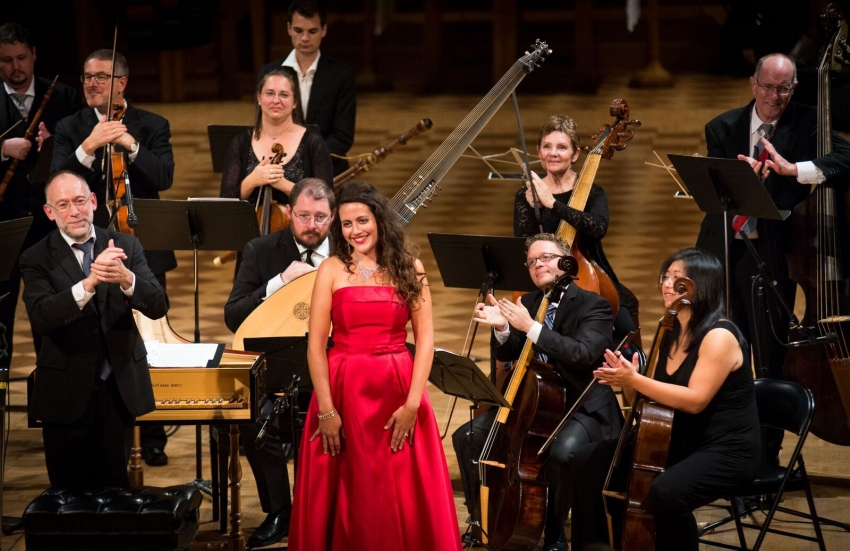 Hard to imagine with four centuries of hindsight, but back when the very idea of opera was still new, George Frideric Handel’s London opera company was driven thrice to bankruptcy by flashier rivals from the continent. Handel’s contemporary nemeses, all exponents of the then-fashionable galant style, included such now-forgotten names as Nicola Porpora, Francesco Maria Veracini, Giovanni Bononcini and Johan Adolf Hasse.

Good, workmanly composers, all of them, whose latter-day obscurity is as unjust, in its way, as Handel’s operatic eclipse in his own lifetime. Not that it matters much, in the long run; all it proves is the fickleness of the concert-going public, then and now. But that’s premise enough for "Handel and his Rivals," the opening offering of Early Music Vancouver’s 2016-2017 season.

It’s an ideal premise to showcase the talents of EMV’s guest soloist, up-and-coming diva Amanda Forsythe. Her supple soprano shines equally bright in pyrotechnic galant flights or in Handel’s more lustrous baroque arias. A quintessential coloratura, she’s a dramatic chameleon, taking on the emotional hue of each role with an array of trills, leaps and giddy high notes, all ably supported by Vancouver’s own Pacific Baroque Orchestra with Alexander Weimann conducting from the harpsichord.

“Coloratura” is Italian for colouring, and Forsythe dresses like one, even in concert, with simple silk sheaths in bright primary colors – blue for the first half and red for the second half of her EMV date. Apt color choices, given the emotional tone of the selections in the two segements.

The evening opened in mood indigo – a note of resigned suffering in a pair of Handel arias: Rodalinda’s “Non ho più affani e pene” and the “Piangerò” from “Giulio Cesare.” Even bluesier was the “Miseri sventurati” from “Arianna a Nasso” by Handel rival Nicola Porpora, where Forsythe sang in pensive duet opposite the eloquent oboe line of soloist Matthew Jennejohn.

But then, after the intermission, the mood turned distinctly red – first with chagrin, in Rodalinda’s “Se’l mio duol,” then with rage in “Difese mi giurasti” from Bononcini’s “Astianatte.” And at last, under scarlet streamers of triumph, Forsythe (as Cleopatra) heralded Cesare’s surprise return from his presumed demise in Handel’s “Da tempeste il legno infranto.”

The Italian libretti offered plenty of vowels for Forsythe’s rich ornamentation and dazzling cadenzas. She packs all this vocal power into a trim and elegant person whose body language – flounces of defiance, repining sighs and much batting of her fine, expressive eyes – underscores each mood without over-acting.

The evening’s vocal selections were intercut with purely orchestral pieces, which is where Handel eventually outran his galant rivals and secured his niche in the baroque pantheon. Concertmaster Chloe Meyers did a solo star turn in a Veracini concerto, while Jennejohn dominated a Handel largo on oboe and a pair of adagios on recorder. John Lenti, on a two-metre long lute, backed up Weimann’s sturdily unobtrusive continuo.

EMV’s new downtown digs at Christ Church Cathedral brought out the warm resonances of the period instruments – gut strings, turned wood, valve-less brass and all. The hall was packed almost up to its sculpted oaken rafters. May it remain so throughout EMV’s busy upcoming season, as detailed on their website.