The Gitxaala have filed a lawsuit in federal court claiming the National Energy Board's Joint Review Panel failed to consider extensive testimony to the panel. 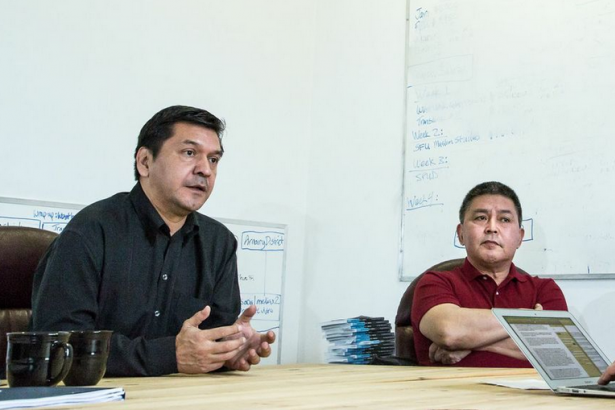 Elmer Moody, Hereditary Chief of the Wolf Clan of the Gitxaala Nation, looks like a man who remains calm in the eye of a storm. And that may serve him well, as the Gitxaala are battling the government in a lawsuit in the Federal Court of Appeal, which pits them against the National Energy Board and the Joint Review Panel, and ultimately the federal government itself.

The Gitxaala allege that the National Energy Board's Joint Review Panel report on recommending in favour of building Enbridge's Northern Gateway pipeline made serious errors in law and reached a flawed conclusion.

The suit states that the JRP did not properly consider Aboriginal rights and title and did not weigh the public interest. It says concerns raised by the Gitxaala during the JRP hearings were dismissed or essentially ignored by the JRP in its report.

"There needs to be an understanding that the Gitxaala seek to protect the environment, our lifestyle and our culture. We can’t put a value in terms of profit loss margins in terms of our culture," he says.

Years of fishing as a boy with his father in the wild waters of the Hecate Straightmay may account for Moody's focus in a storm which promises only to intensify as the federal government's push to build the Enbridge pipeline continues.

Clarence Innis, 63, Acting Chief of the Gitxaala Nation from the Killer Whale Clan, possesses a similar relaxed, yet focused, manner. Born in Lach Klan, a village of the Gitxaala, he followed in the footsteps of his fishermen parents, who followed their parents in an unbroken line of fishers and gatherers that he says goes back a thousand years.

Moody was born on Dolphin Island in 1968 in the community of Kitkatla, a "pristine community in a pristine territory". The island is connected to Prince Rupert by a passenger ferry that runs twice a week. He spent his childhood on Kitkatla. He left home to get an education and returned home when that was complete. "It’s where I belong," he says. "My father was a commercial fisherman, he was also a trapper. He caught salmon, halibut, row and kill herring. The  majority of the male population fished."

"I did harvest year round. Many of our people are doing that right now, harvesting for winter. It depends on what’s in the season--herring, roe and then salmon will be there. In between, seaweeds are coming up. Things will be in season. It’s a cycle that we follow." He spoke of the birds, ducks, seals, and variety of shell fish that populate Kitkala.

"One of those rights that is guaranteed under the constitution was the right to gather resources. We are guaranteed the right to harvest sea resources for food. For the Gitxaala, harvesting is a year round thing," Moody explains.

It was the week of the 25th anniversary of the Exxon Valdez spill when Moody and Innis arrived in Vancouver to meet with the federal government for three days of consultation. The spill was very much on their minds.

Moody remembers watching the news coverage. "It was pure destruction," he says.

Innis recalls the event as well. "Just looking at those pictures, it makes us more determined. We don't want to see this happen in our territory." And this is something the government or Enbridge simply can't guarantee, he says.