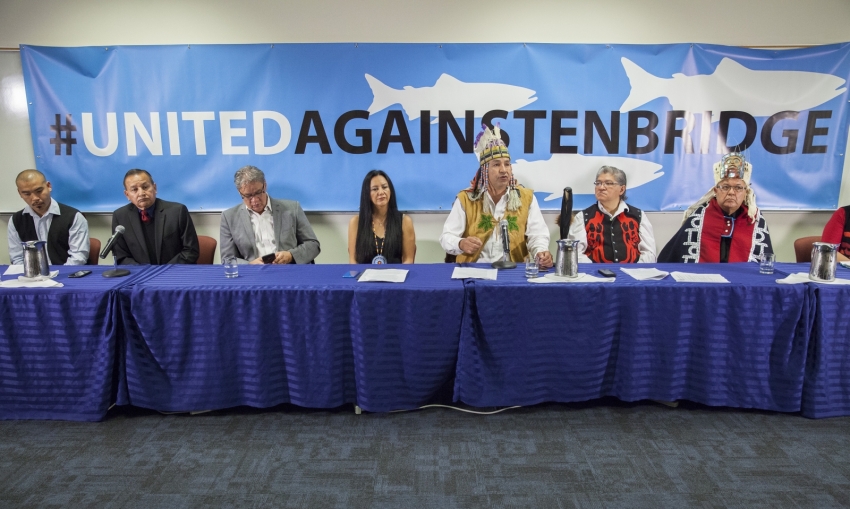 First Nations announcing their federal legal challenge to the Northern Gateway pipeline at a Vancouver press conference in Vancouver. Photo by Mychaylo Prystupa.

The Gitga'at First Nation is giving thanks and celebrating the Federal Court of Appeal decision today voiding the former Harper cabinet's approval of the Enbridge Northern Gateway pipeline.

Gitga'at Council, Hereditary Leadership and elders met this morning at the home of 90 year-old Gitga'at elder and matriarch, Helen Clifton, for an emotional discussion of Thursday's hard fought court victory and the more than a decade-long struggle against Enbridge.

"This is a victory for Gitga'at," said Clifton. "We did this as a whole community and we are still free in our territory. We are rich as a people with cedar, sea, air and water. There is no money to pay for what we have. This is a step up a high mountain, and I hope to live to see many more victories for our people's rights and title, and our future generations."

"Our community has given us a mandate to move forward through the courts and otherwise, but we are also open to working with the federal government on management and development in our territory," said Arnold Clifton, Chief Councillor. "We look forward to putting Enbridge behind us and sitting down with government to begin working on a shared future, including an oil tanker ban that can protect BC's coastal waters and the Great Bear Rainforest for all Canadians."

Prime Minister Trudeau and Justice Minister Jodi Wilson-Raybould visited the Gitga'at community of Hartley Bay and the Great Bear Rainforest just before the last federal election to announce their opposition to the Enbridge Northern Gateway pipeline.

"We want to thank the Federal Court of Appeal for hearing our evidence and truly listening," said Marven Robinson, Gitga'at Councillor. "Despite being on the front line and at ground zero in terms of impacts, our community has often felt ignored by those in power. Today's ruling helps to right that imbalance."

Gitga'at territory encompasses approximately 7,500 square kilometres of land and water, including a major portion of Douglas Channel, which is the proposed route oil tankers would have to travel through to get to and from Kitimat.