There are a thousand ways to die in Westeros.

It's the Game of Thrones S05 finale recap.

He heads back home to rape his wife.

Sansa Stark is hurrying back from the tower, her hopes of a quick rescue dashed. She hurries along a corridor lined with bows and arrows, but doesn't tool up to ambush Psycho Hobbit.

You know who has tooled up, though? Myranda, Psycho Hobbit's jilted ex.

Reek is standing right beside her, like, "Very Thea Queen, m'lady..."

Myranda tells Sansa that she's gotta pump out some baby Psycho Hobbits (male, naturally), but that's it. She's perfectly happy to torture the shit out of Sansa. Just as Myranda is about to start pincushioning Sansa, Reek finds at least a figurative set of balls and springs into action. He throws Myranda over the ledge; she lands with a crunch on the hard, hard ground below.

Oh, shit, Psycho Hobbit is back! Reek leads Sansa to the battlement and climbs over it. He reaches out his hand like, "Come with me if you want to live!"

Sansa Stark and Theon Greyjoy join hands and leap to what gravity suggests should be their deaths.

Over in Braavos, Meryn Trant is beating some underage sex workers with a stick, because he's a rhymes-with-blunt. He and Psycho Hobbit should go bowling. One of the three girls isn't crying. Trant sends the other two out and focuses on beating up the holdout. She's holding her composure even after a vicious punch to the stomach. It's almost as if she's...

Yes, Arya Stark, that's exactly what I was gonna say. Arya leaps up and stabs Trant in the eye. She takes his ass down and stabs out his other eye. Gagging him so nobody will hear his screams, Arya then does that rapid-fire stabby-stabby thing like in The Following. She's like, "Say my name, bitch!" Trant's like, "Mmmrrruuurrggh!" Arya's all, "I'm Arya Stark. You're no-one. You're nothing."

I"m screaming at my screen, "YEAH! F U C K,  Y E A H !!" I'm running around my living room throwing up the double devil-horns. My neighbors are yelling at me through the walls. I'm yelling back, "Arya's a ninja! Act like you know!"

Meanwhile, Arya has returned to the Hall of Faces beneath Ninja Junior High. She returns the face she borrowed for her off-the-books ninja mission.

The Waif is like, "See? I knew she couldn't hack it here at Ninja Junior High!" Jaqen is pissed. He tells Arya, "That life was not yours to take. A girl stole from the Many-Faced God. Now a debt is owed." He whips out some poison: expulsion from Ninja Junior High is no joke. Then Jaqen drinks the poison himself.

Arya is crying. The Waif is like, "Why are you crying? He was no one." Arya turns around to see... Jaqen H'gar?!

She pulls mask after mask from the body, until...

Jaqen tells Arya, "The faces are for no-one. You are still someone, and to someone the faces are as good as poison." Arya's eyes turn milky-white as she goes blind. 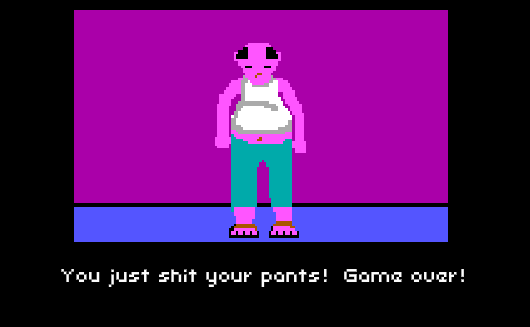 Prince Doran and his fam are saying goodbye to Jaime Lannister and Bronn, who are taking Prince Trystane and Myrcella Baratheon back to King's Landing. This is the subtext I'm getting from Ellaria Sand and Jaime Lannister:

Ellaria makes a show of kissing Myrcella goodbye, kissing her just a little too long.

Tyene Sand is still flirting with Bronn, telling him, and I quote,"You want a good girl, but you need a baaaad pussy!"