There are a thousand ways to die in Westeros.

It's the Game of Thrones S05 finale recap. 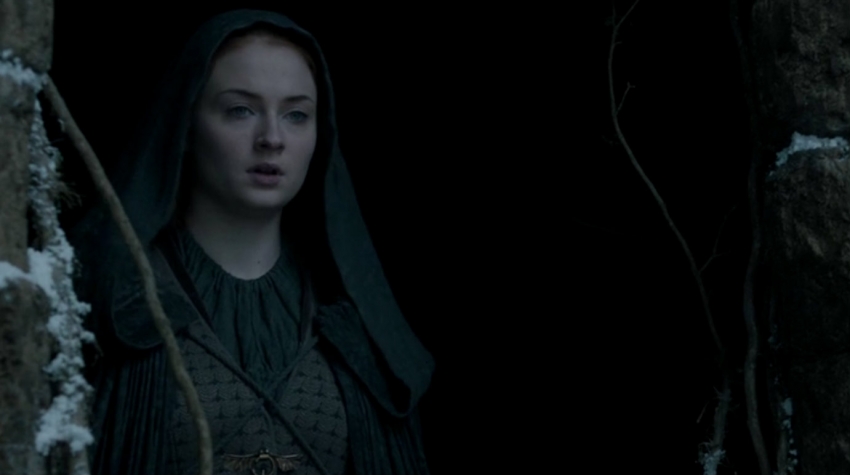 Sansa Stark is wishing she were a character in a different show. This is Game of Thrones S05E10, 'Mother's Mercy'.

Welcome back, Dire Wolf Fans! Here you’ll find the recap and review for Game of Thrones S05E010, titled “Mother’s Mercy”. Because Season 5 has really laid the groundwork for everyone to just hug it out. It's season finale time.

Previously, on Game of Thrones... Okay, so Stannis Baratheon really wanted to take Winterfell. Shireen really didn’t want to die. So Melisandre burned Shireen at the stake anyway as Stannis watched, because Game of Thrones. How does Melisandre know which horrific sacrificial method to use? Is there, like, an app; or does she just make it up as she goes?

In an epic PR coup for Team Dragon Mama, Daenerys Targaryen ex-caped the clutches of the Sons of the Harpy astride a dragon’s back.

Tyrion Lannister, Daario the Lothario, Ser Jorah Mormont, and Missandei were left behind, though, which was kind of bullshit. Maybe Drogon did laps, letting our anti-heroes enjoy a few moments of exhilarating/terrifying flight, but I doubt it.

Jon Snow has brought back what will have to pass for a Wildling army, and the Crows are not pleased. I think the giant is freaking them out.

In Braavos, Arya Stark got side-tracked from her Oysters-Clams-an’-Cockles ninja mission when Meryn Trant rocked up. 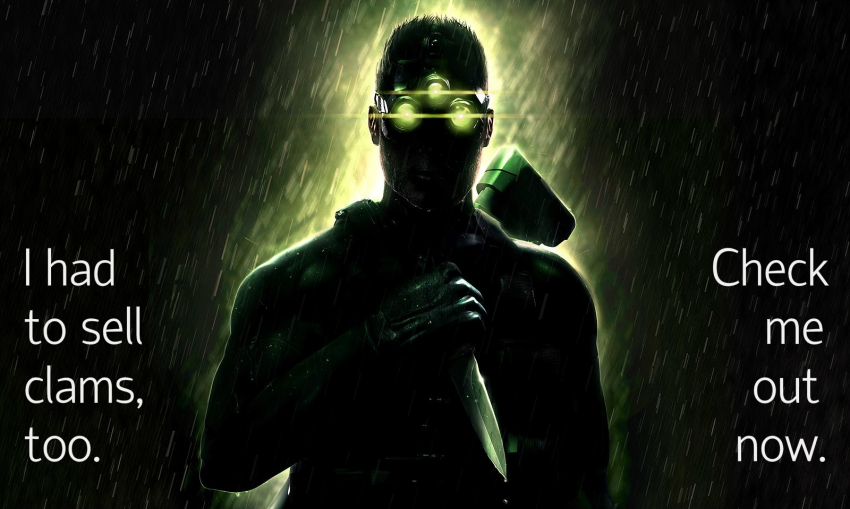 She hasn’t told Jaqen H’gar about it yet, but I bet he already knows. Hang on, how do we know that Syrio Forel wasn’t actually Jaqen all along? And that Jaqen didn’t just plant himself in that cage for Arya to find? How ninja does this all even go? I bet it goes pretty ninja.

Have you ever had one of those days? 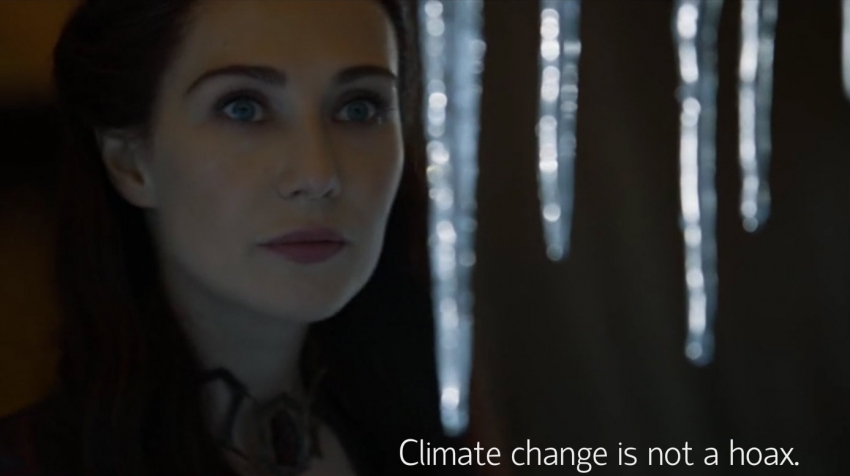 The sexy witch brings the stellar news to Stannis "Don't Call Him Daddy Anymore" Baratheon, who sacrificed his daughter at the stake in order to bring about a brief, localized early spring. Stannis curtly tells Melisandre to ride for Winterfell. He can't help feel that he made a horrible mistake by, you know, sacrificing his daughter. He (and you) are not alone in that thought: half of TSWRF's troops deserted in the night, after watching Stannis sacrifice his daughter. By burning her alive.

Stannis is like, "Okay... disappointed, but it's not as if my wife hung herself in abject misery after watching her daughter burn at the stake, right? ... Right?" 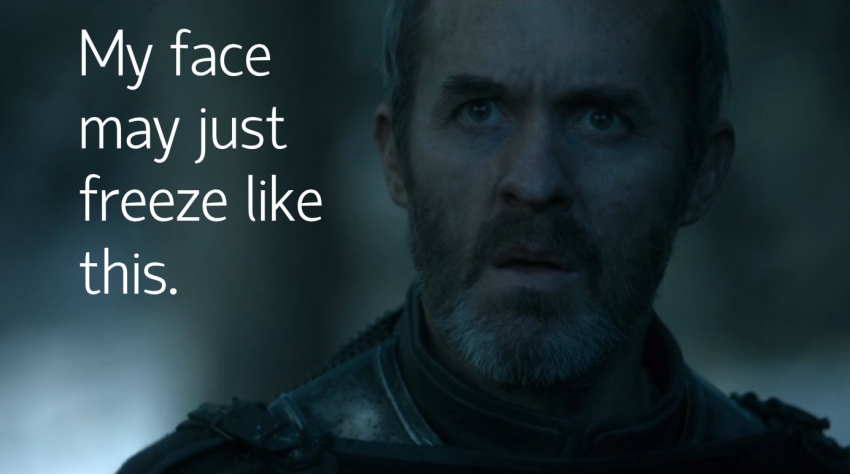 Another soldier comes up. Stannis is like, "WHAT NOW?!" Apparently Melisandre rode out of camp, which I thought was what Stannis told her to do.

Stannis is like, "Right, saddle up, we're marching to Winterfell."

Up at Castle Black, Jon Snow is telling Samwell Tarly about the Night's King and the huge-ass army that he raised. From the dead. 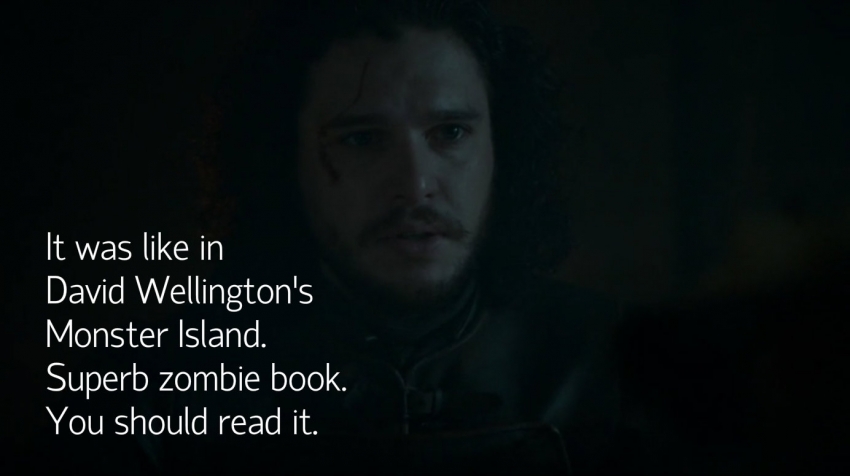 Jon's plan is to hope the zombies are as shitty at climbing The Wall as the Wildlings were. Oh, and, yeah, about that Dragonglass... It's gone. Sam finds the silver lining as always, pointing out that now they know that Valyrian steel can kill the White Walkers. Unfortunately, though, Valyrian steel swords aren't something you find in every department store.

Jon points out that he's the first Lord Commander in history to sacrifice Crows to save the lives of Wildlings: "How doos it feel to be friends with the most hated man at Castle Black?" Sam wants to take Gilly and the baby to Old Town, where he can train to become a maester.He notes that if they stay, Gilly and the baby will be killed, and he'll die trying to protect them, "which means the last thing I see in this world will be the look in her eyes when I've failed them." I'm frankly surprised that that hasn't already happened. Jon is too much of a softie to say no, though he says, "The Citadel will make you swear off women, too." New to his pimp boots, Sam is like, "Well, they'll bloody try!" 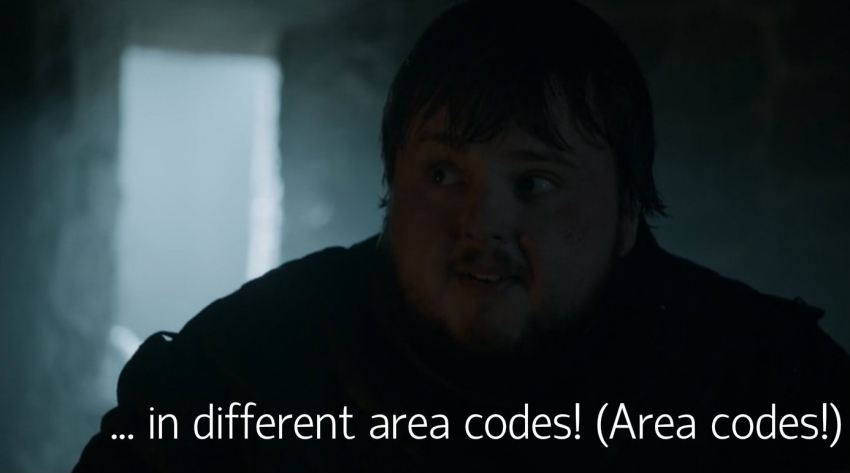