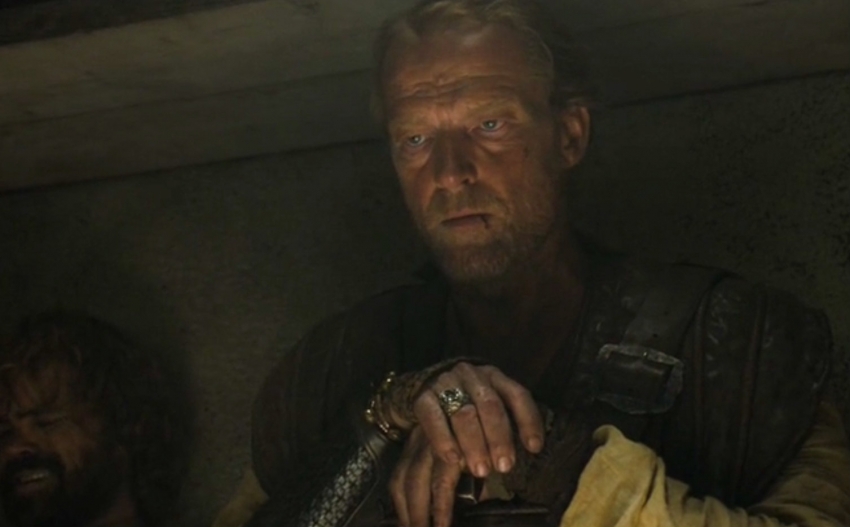 Ser Jorah Mormont had hoped he'd be at a different point in his career by now. It's the Game of Thrones S05E07 recap and review.

Welcome back, Dire Wolf Fans! Here you’ll find the recap and review for Game of Thrones S05E07, titled “The Gift”, which is 99% likely to be ironic. Spoiler alert, obviously. Previously, on Game of Thrones... Because Tyrion Lannister went to the Walter White Academy of Spurious Mendacity, Ser Jorah Mormont is believed to be a master pit fighter despite the fact that he dresses like a yoga instructor.

Oh, and Bronn was likely poisoned by one of the badass, badass Sand Snakes.

Also, Cersei Lannister's machinations have landed Margaery Tyrell in jail along with her brother Loras, and Lady Olenna "Awesome" Tyrell is not happy about that; not one bit.

Meanwhile, Arya Stark euthanized a sick child, leveling up in Ninja Junior High. She was shown a huge hall of faces, one of which she may soon borrow.

Sansa Stark did not have it as good as her little sister, getting raped on her wedding night by her new hubby, Ramsay “Psycho Hobbit” Bolton. Can Team Sexy Witch Religious Fundamentalism just get to Winterfell and kick some Bolton ass already?

Winter is coming pretty much here

Snow is falling at Castle Black. Jon Snow and Tormund "Beardo" Giantsbane are getting ready to head north, gearing up like in Commando.

Jon is leaving Ser Alliser Thorne in charge, who wastes no time in telling Jon Snow that he essentially knows noothin'. Samwell Tarly gives Jon the Kryptonite shard he used to kill the White Walker. The two friends share a hug before Jon and Beardo ride out. 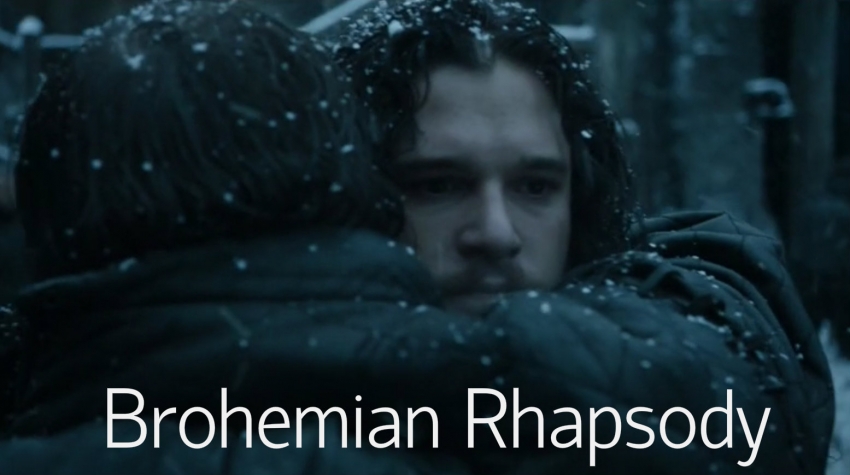 Samwell and Gilly take Gilly's baby to meet the dying Maester Aemon, who reminisces about his late brother Egg, aka Aegon Targaryen, aka The Mad King's grandfather. (So, Aemon must be considerably older than he looks, and he looks like an octagenarian.) Aemon tells the couple to take the baby south, "before it's too late."

Down at Winterfell, Reek is trying to scrub last night's events from his retinas by watching Nyan Cat video over and over on his iPad. It's not helping. he brings breakfast to Sansa, who is still sobbing in her wedding bed. Snow drifts in through the window, which Reek closes. Sansa is like, "Theon, wait!" Theon is all, "Not Theon, milady. Reek." Sansa is like, "Did you really just say 'milady'? Shit. And Theon/Reek/Gladys/Whatever, just help me."

Reek is like, "Just do what Psycho Hobbit says, or he'll hurt you." Sansa is all, "As opposed to this? He's been raping me every night for a week, and keeping me locked in this dark-ass room. It can't get any worse than this." [A week? O_o ]

Reek quickly glances down at the vacant lot where his junk used to be and says, "It can always get worse." Sansa says, "Take this candle up to the Broken Tower and light it in the window. It's a signal for help like in The X-Files..." 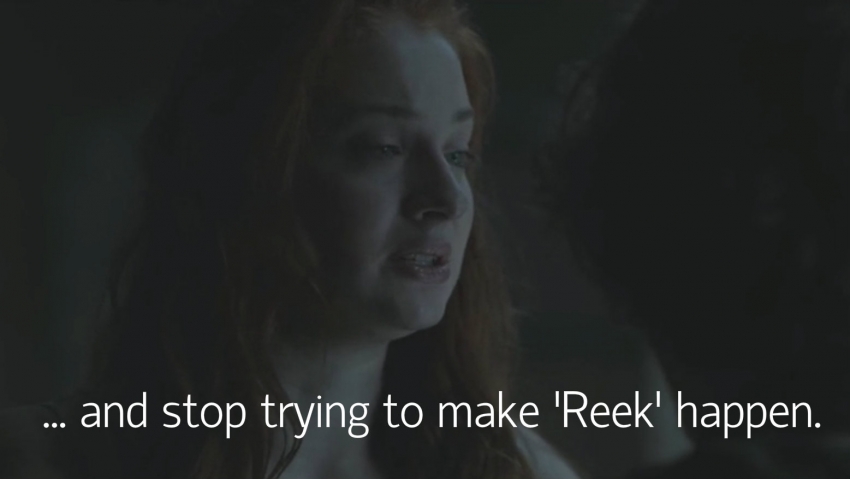 Reek Theon promises to help. He trudges out into the snow toward the Broken Tower, from whose topmost window Jaime Lannister threw Bran Stark when the kid caught him banging his sister, because... Game of Thrones. Instead, though, Theon Reek goes to Psycho Hobbit.

Meanwhile, Brienne of Tarth is surveying Winterfell from a nearby hill. Has she been standing like that all week? 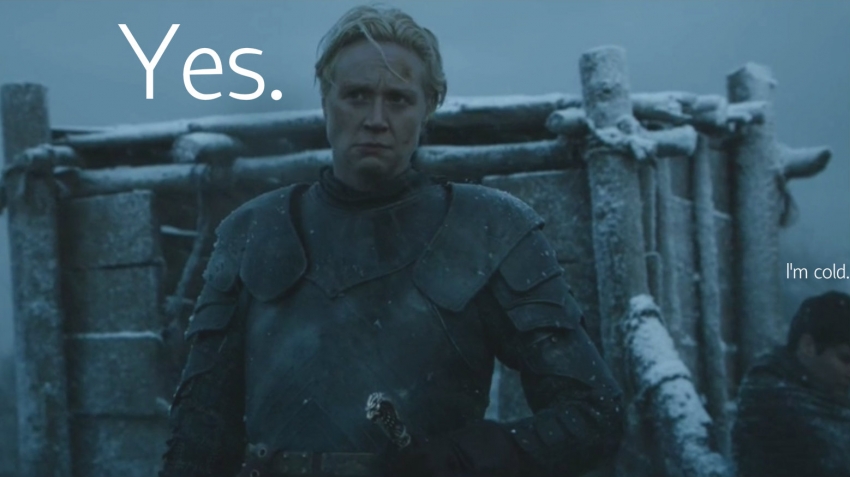 End of an era

At Castle Black, Aemon is mistaking the baby for Egg. Samwell refuses to leave Aemon's side, since he thinks the kindly old man will die, like, any minute. Sam, dude, you're right. 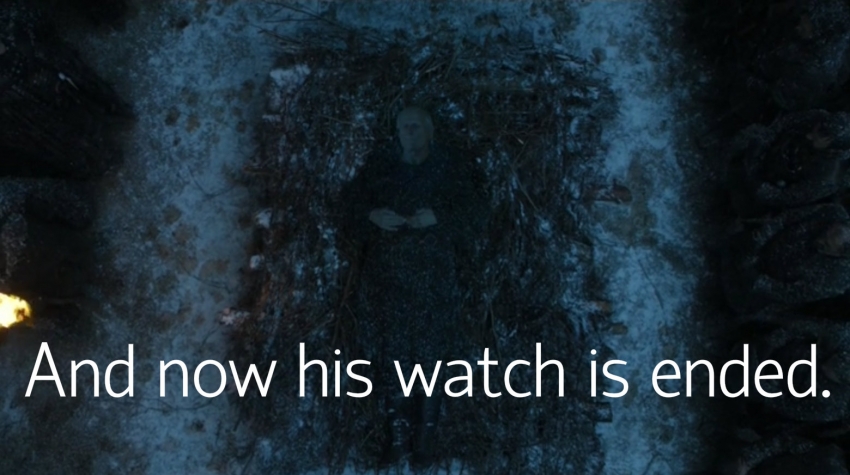 Psycho Hobbit has taken a breather from committing heinous acts of sexual assault to gaze out at the falling snow and drop some exposition, but not before greeting his bride and complimenting her on her beauty. 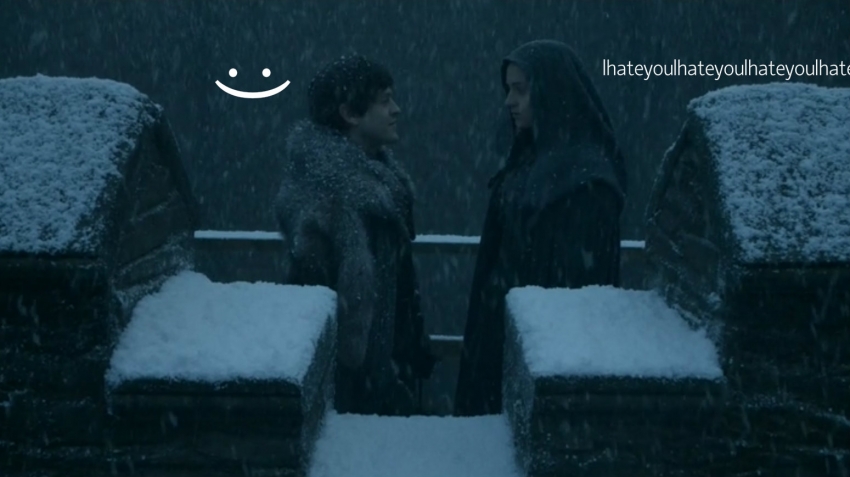 Game of Thrones S05E04 Recap and review: 'Sons of the Harpy'