Stress-testing Castle Black as the wildlings move in for the kill. Here is the recap and review for 'Game of Thrones' S04E09, 'The Watchers on the Wall'. 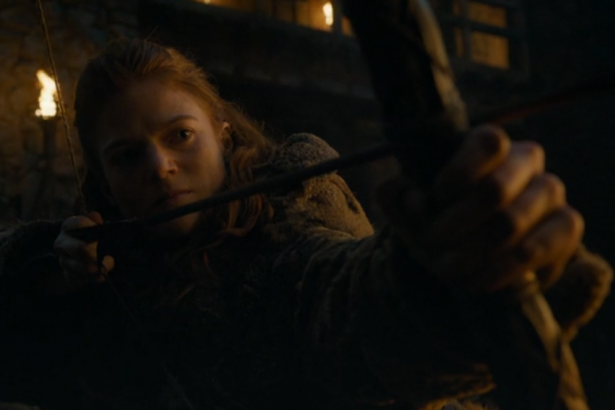 Ygritte is in ass-kicking mode for 'Game of Thrones' S04E09: 'The Watchers on the Wall'. Read the S04E09 recap and review right here.

Game of Thrones S04E09: 'The Watchers on the Wall' recap

Welcome back, Dire Wolf fans! Here you’ll find the recap and review for “Game of Thrones” S04E09, titled “The Watchers on the Wall". As always, spoiler alert.

In case you missed the extravagantly violent death of Oberyn Martell, this is not how it happened:

But seriously, folks, Oberyn’s predilection for theatrics have doomed Tyrion Lannister to death. What a headache. 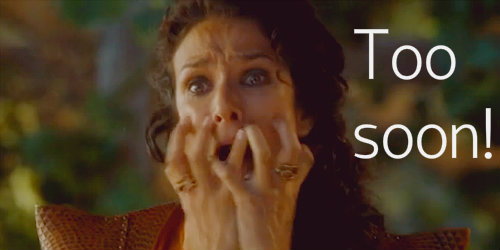 Cersei Lannister was right in choosing Gregor “The Mountain” Clegane as her champion: he ended up totally crushing it. 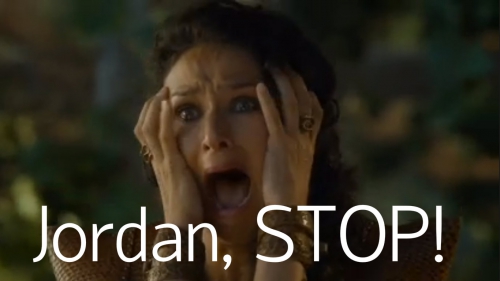 Okay, fine, moving on. Arya and Sansa Stark are about three feet from reuniting, and Castle Black is about six seconds from getting overrun by a gazillion wildlings; one of whom is Jon Snow’s bloodthirsty ex-girlfriend.

"Game of Thrones" has a bit of a thing for ninth episodes. The death of Ned Stark (RIP). The Battle of Blackwater. The Red Wedding. What treats await us this week?

Okay, let’s get into it.

The heart is the softest target

Jon Snow and Samwell Tarly are freezing their asses off atop The Wall. The rest of the Crows are presumably down in Castle Black, binge-watching "Orange is the New Black" S02. 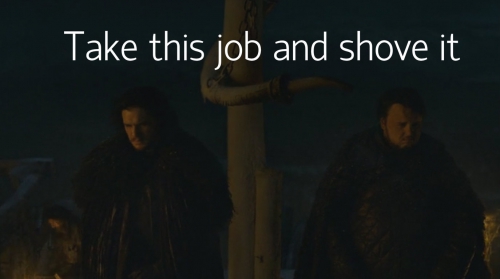 Sam is asking what Ygritte was like. Jon is all, "She 'ad red hair. She constantly questioned my intelligence." Sam wants to know how big her feet were. ¯\(°_o)/¯

He just wants to know what it's like to be with someone, since he's pretty sure his ass will be deader than fried chicken, along with the rest of the Night's Watch, once the wildling horde attacks. As for the whole celibacy thing, Sam takes the Bill Clinton approach: narrow the definition of "sexual intercourse" to allow for... sexual intercourse. All hypothetical, of course, since he and Gilly never, uh, you know.

Jon describes the feeling as best he can, which isn't saying much. He even includes the bit where your lady live pincushions you with arrows. He's like, "Go get some sleep, Sam. I'll take this watch. And don't tell me what happened to Piper Chapman after she kicked Pennsatucky's ass. No spoilers." Still heartsick for Ygritte, Jon cannot help but break into song.

There's even an owl to do the backing vocals. 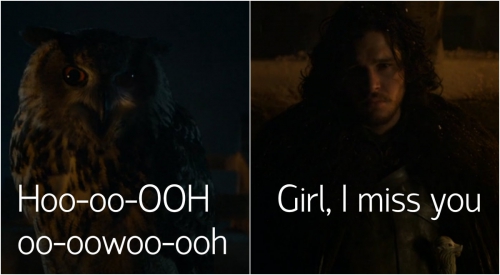 That owl has a sinister purpose, though: it's the eyes of a warg from Wildling Team Six. He's warging out as Beardo, Styr, and Ygritte prepare to whup some Crow ass. Beardo is telling that same ol' story about how he fucked a bear, but Ygritte is all, 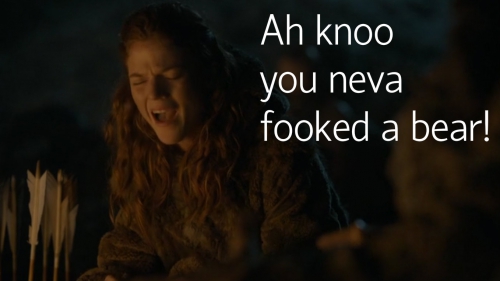 She's like, "Ah joost wanna stick summa these arreaus into a boonch of Crows. An' why is our warg singin' that Stones choon?"

Ygritte then puts Westeros' manifest destiny on blast; and says that, if Jon Snow is still alive, she'll kill him and hang his pillar and stones around her neck. Styr calls bullshit, saying that all she'll be doing if she sees Jon will be to "serve him up a nice, juicy slice of ginger minge." 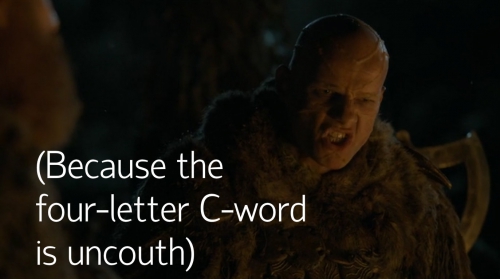 As Ygritte calls dibs on Jon Snow, a wilding with a baby walks away from the group...

Once upon a mattress

Sam heads down into the library to read about wildling atrocities, since he's dead-set on wallowing in misery (which is pretty much the status quo at Castle Black anyway.) The blind Maester Aemon pops in to kindly admonish Sam for falling in love with Gilly. Turns out Aemon's last name is Targaryen. He's Daenerys Targaryen's uncle, but has been up at The Wall, like, forever. 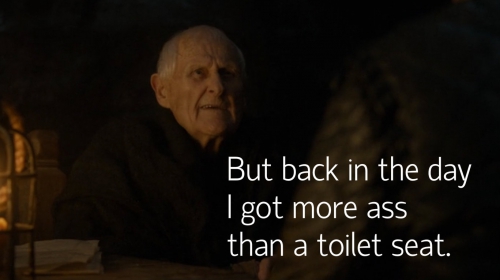 Aemon cheerfully says, "Nothing makes the past a sweeter place to visit than the prospect of imminent death."

Gilly shows up with her baby at the gates of Castle Black, and Sam tells Pyp to let her in. He swears and everything. As he's promising to stick by Gilly's side from now on, the horn blows from atop the wall.