Game of Thrones S04E08 recap and review: 'The Mountain and the Viper'

If you like nudity and violence, then you don't want to miss this week's episode. Welcome to the recap and review for Game of Thrones S04E08, 'The Mountain and the Viper'. You'll laugh. You'll cry. You'll hurl. 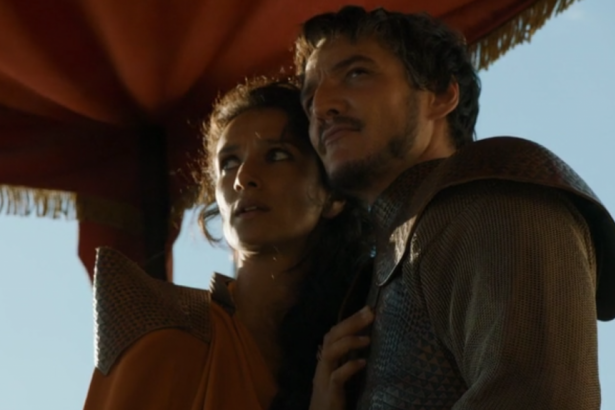 Oberyn Martell and Ellaria Sand in 'Game of Thrones' S04E08. Oberyn seeks revenge for the murder of his sister.

Game of Thrones S04E08: 'The Mountain and the Viper' recap

Welcome back, Dire Wolf fans! Here you’ll find the recap and review for “Game of Thrones” S04E08, titled “The Mountain and the Viper". As always, spoiler alert.

Petyr "Littlefinger" Baelish continues dictating the plot of “Game of Thrones”, this time shoving his brand-new bride Lysa Arryn though the Moon Door. George R.R. Martin must have a hell of a time accommodating for this guy’s shenanigans. Meanwhile, Oberyn Martell has volunteered to fight Gregor “The Mountain” Clegane to the death, which takes almost as much self-confidence as hitting on Grace Jones. 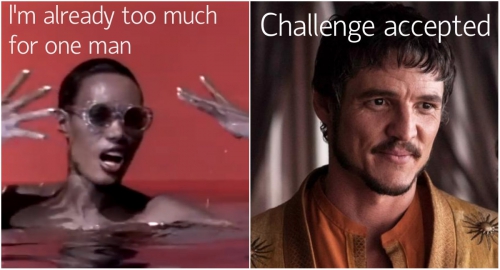 Oberyn stepped up in the nick of time: both Bronn and Jaime Lannister left Tyrion Lannister hanging when he asked them to rep him in that trial by combat. Brock Samson was also unavailable.

Also, Daario the Lothario took time out of his "Orphan Black" schedule to put the wood to Daenerys Targaryen; and Jon Snow's giant-sized warning regarding Mance Rayder's impending attack is going unheeded.

Brienne of Tarth and Podrick Payne will probably eat that Dire Wolf bread on the way to the Eyrie, while Sandor "The Hound" Clegane and Arya Stark inch towards the Eyrie and a deeper mutual understanding.

Call of the wildling

Up at the brothel in Mole's Town, a bunch of drunk people are playing the best drinking game ever: Guess Which Song I'm Belching. This one chick is belting out some belch-karaoke, and one of her friends reckon it's "The Rains of Casamere". Wrong "Game of Thornes" episode title, dude: turns out it's "The Bear and the Maiden Fair". I could easily watch an hour of this. 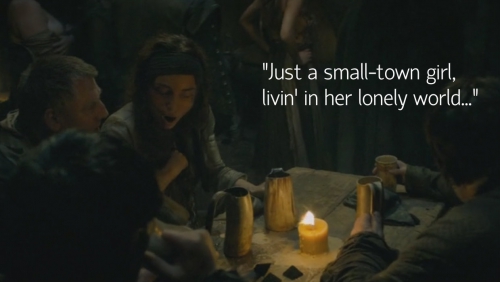 Belch Karaoke Chick takes a break from belittling her mates' virile members and calling them the four-letter C-word to lurch back into the kitchen and threaten Gilly and her baby. Gilly interrupts Belch Karaoke Chick's little-wildling-bitch monologue when she hears what sounds like an owl hooting.

But that's no owl... it's Wildling Team Six, creeping into town for some late-nite murder! The wildings' first stop is the brothel, so, no, we're not gonna get an hour of Guess Which Song I'm Belching. Instead it's How Many People Can We Stab, and it's not a game that takes very long.

Ygritte and Beardo are leading the pack, followed by the leader of the cannibals.

Ygritte pins Belch Karaoke Chick to the wall with a spear: FATALITY! Then she hears a baby crying... and spots Gilly and her baby son. Recognizing a Frozone homegirl when she sees one, Ygritte silently tells Gilly to shut that baby the fuck up and keep down. 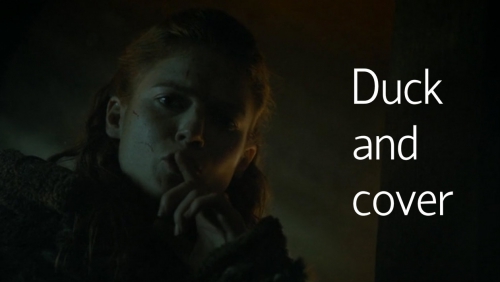 This, too, shall pass

The next morning at Castle Black, news has reached the Crows about what went down in Mole's Town. Samwell Tarly laments having left Gilly alone with a baby in a brothel populated by anti-wildling racists. Jon Snow is like, "You couldn't have known," but Sam realizes that, yes, of course he could have fucking known He's in his own self-flagellating world as the other Crows debate whether or not to ride out and confront Wildling Team Six. Jon reckons they shouldn't. I tried to Skype into the meeting and agree, but Castle_Black-Conference_Room showed as offline.

Anyway, one of the Crows tries to cheer Sam up, suggesting that maybe Gilly managed to survive by hiding herself. Hey, she survived a lot of crazy stuff over the past few seasons. 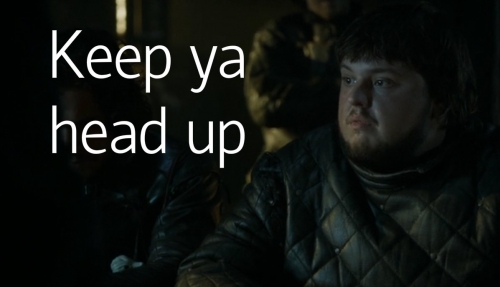 Jon mentally calls up a map of Westeros, working out that Castle Black is next after Mole's Town. 102 Crows vs 100,000 wildlings (a number which may or may not include giants), since three of the Night's Watch were killed at Mole's Town. Hmm.

The Crows aim for two short-term objectives: drink a beer and swear to prevent each other from returning as ice zombies.

Game of Thrones S04E06 recap and review: 'The Laws of Gods and Men'

Game of Thrones S04E05 recap and review: 'First of His Name'