The former care facility, which cost more than $11 million to acquire, will be ready for new tenants in July. 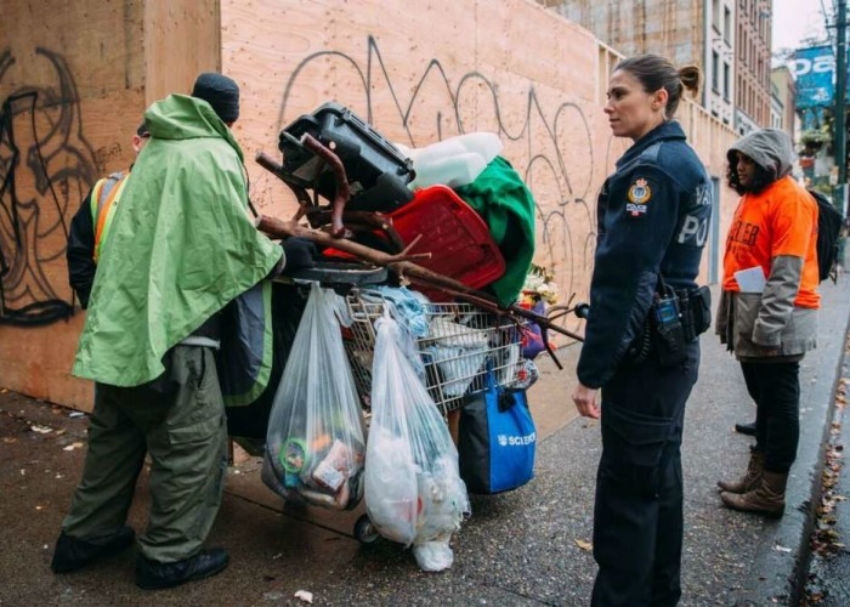 A homeless man pushes his belongings through downtown Vancouver under the watchful eye of local police. Photo by Canadian Press.

The British Columbia government has bought a former seniors care facility in downtown Victoria and plans to turn it into 140 housing units for the homeless.

The purchase comes as the province heads to B.C. Supreme Court later this month in its second attempt to evict the 80 to 100 people who have been camping on the grounds of the Victoria courthouse since last year.

B.C. paid $11.2 million for the former care facility which will be ready for tenants next month.

Housing Minister Rich Coleman says the new building has enough space for the homeless camp residents who are living in unsafe conditions in tarp−covered tents beside the courthouse.

Coleman says the province has already provided more than 190 spaces for Victoria’s homeless since last October, including shelter and living units at a former youth jail, community centre and seniors care facility.

In April, the chief justice of the B.C. Supreme Court refused to grant the province an interim injunction to evict the campers, ruling the government didn’t prove it would suffer irreparable harm if an injunction wasn’t granted.