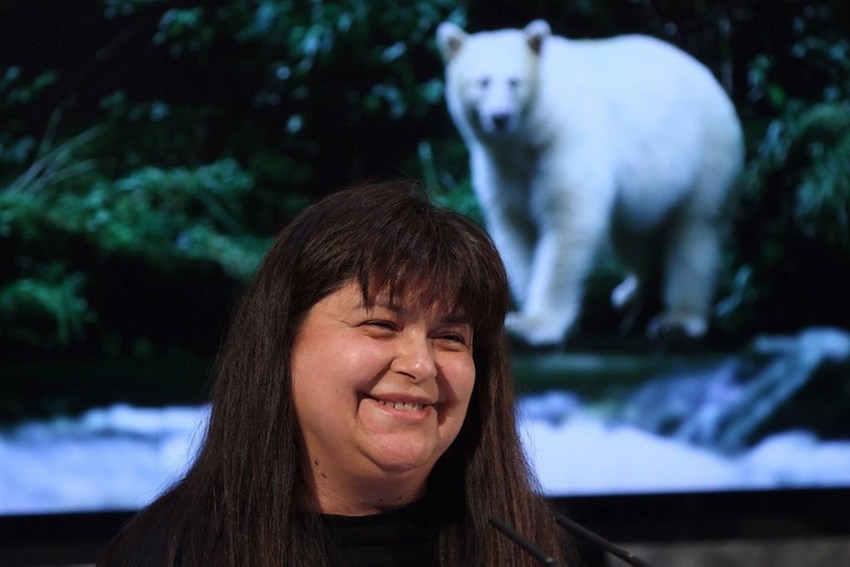 Marilyn Slett, chief of the Heiltsuk Nation. Photo by The Canadian Press.

Two federal ministers have visited a community on British Columbia's central coast where residents are concerned diesel fuel from a sunken tug could have devastating long-term effects on their economy and environment.

Marilyn Slett, chief of the Heiltsuk Nation, says Fisheries and Oceans Minister Dominic LeBlanc and Justice Minister Jody Wilson-Raybould spoke with community members and did a fly-over of the scene on Sunday.

She says the First Nation invited the politicians because they thought it was important that members of the federal government see the "disaster situation" firsthand.

The Nathan E. Steward had more than 220,000 litres of diesel on board when it ran aground and sank in the waters near Bella Bella, B.C., on Oct. 13.

It's unclear how much fuel leaked into the surrounding waters, but a situation report says the current estimate is about 101,000 litres of diesel and nearly 5,000 litres of lubricants.

Slett says she's feeling encouraged following the visit, but the First Nation wants a commitment that the federal government will help deal with the long-term effects of the spill.

"There's a lot of things that we need to talk about in terms of the economic and socio-economic impact that we'll be enduring," she said.

The spill's effect on the environment and wildlife has been of particular concern in recent days. Slett said community members have recently reported seeing a dead seal, a dead otter and birds covered in oil.

"It's really hard on the community," she said. "It just breaks our hearts to see it."

Kelly Brown, director of Heiltsuk Integrated Resource Management Department, said in a statement that juvenile herring have been spotted swimming around the sunken tug, causing concern about the future populations of the fish.

"I believe we had some impactful conversations," she said. "I'm hoping that this will turn the table and we'll be able to really bring some breadth to reconciliation and what that means moving forward."