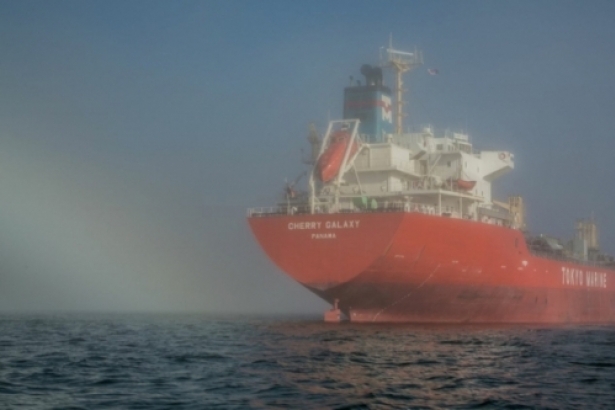 An oil tanker in the Burrard Inlet. Photo by Zack Embree.

Coming in just under the wire of yesterday’s midnight deadline, a group of First Nations in Washington State have applied add their voices to Canadian nations’ opposition Kinder Morgan’s Trans Mountain pipeline project. The Lummi, Swinomish and Tulalip nations have applied for intervenor status at the upcoming hearings.

The Coast Salish peoples of British Columbia, the Musqueam, Skwomesh and Tsleil-Waututh, have also applied to speak at the National Energy Board hearings.

Francesca Hillery of the Tulalip nation said the national borders separating Canada and the U.S. are meaningless when it comes to protecting the land and the shared water.

Neither does the border separate the Coast Salish people, she added.

“There’s a very strong connection between the tribes down here and up there simply because a lot of them have been meeting, coming together at a yearly event.” The Coast Salish Gathering is an annual event that brings together all Coast Salish nations, along with some non-tribal officials, to discuss the issues affecting them, including the impact of development in their territories.

For nations in the Pacific Northwest, life revolves around the water, from sustenance to ceremony and recreation. And while the threat to the water and the culture that stems from it has prompted the nations of Washington to stand together, Hillery said the conflict has also brought together indigenous and non-indigenous peoples.

“This isn’t just about the Coast Salish tribes either,” she said. “This is about all residents of the Salish Sea and that includes Canadians and Americans." She said it was more about a way of life, and not about the ancient Coast Salish culture.

If the proposed project to twin the existing pipeline is approved, the volume of oil transported would nearly triple from roughly 300,000 to 890,000 number of barrels per day. Tanker traffic off the coast of BC and Washington would also increase five to six times the current rate, from five tankers to 30 per month.

Debra Lekanof of the Swinomish Tribe said the concerns raised by the recent study on tanker traffic in Puget Sound coincide with many of the reasons the nation is opposed to the project. The study showed a significant increase in the risk of accidents and oil spills should the Trans Mountain pipeline project get approved.

“Today’s technology and preparedness isn’t at a level that can guarantee that no resource can be impacted, that human health will be protected and aboriginal treaty rights will not be hindered,” she said.

She said attorneys for the nation have long been collaborating not only with other Washington nations, but also with nations in Canada.

The US tribes received support from the state’s Department of Ecology, she said, which has been reaching out to the tribe on the issues that concern them to ensure they’re heard at the state level. She said it’s important to keep government at both state and federal levels apprised of their plans to defend their land and their treaty rights.

Lekanof said the tribe plans to raise concerns about the wildlife and the ecosystems put at risk by the potential increase in tanker traffic, especially to fisherman using traditional methods such as longlining. The goal, she said, is to bring awareness to the connections between the Coast Salish nations as well as the importance of the water for everyone.

“Our role in intervening in not only to stand by our Coast Salish brothers to the north, but also it’s important to recognizing the citizens of the Salish Sea, those who came before us and those who will come after,” she said.

“If we take care of what’s ours, it will be here for generations to come.”