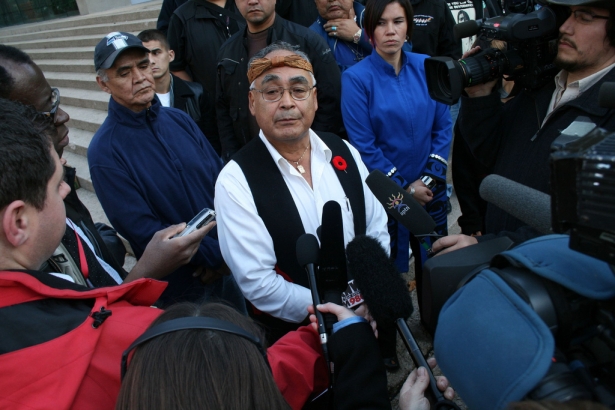 Then-president of the Nuu-chah-nulth Tribal Council Cliff Atleo speaks to reporters outside the BC Supreme Court when the court first ordered Canada to consult with the nation about fisheries. Photo courtesy of hashilthsa.com

After winning an unprecedented injunction against the federal Department of Fisheries and Oceans late last month, the Nuu-chah-nulth First Nations and other nations along the coast of BC say they're moving closer to having their Aboriginal fishing rights fully recognized by the federal government.

The win is a significant step in what has been an ongoing struggle. In 2009, the courts found that the federal government was required to consult with the Nuu-chah-nulth on commercial fisheries, and gave Canada two years to negotiate.

“Here we are in 2014 now, still trying to negotiate, and this herring example is one of many examples of where the government hasn’t negotiated with First Nation their Aboriginal rights," said Nuu-chah-nulth fisheries manager Don Hall.

After the DFO ignored the recommendations of its scientists and opened the commercial fishery off the west coast of Vancouver Island for the first time since 2005, the Nuu-chah-nult took the DFO to court last month seeking the injunction.

Their concerns were twofold: Nuu-chah-nulth fishermen determined that herring stocks still too weak to support commercial fishing, and the federal government has not negotiated an agreement with the nation based on its Aboriginal rights.

“[Justice Mandamin]  went so far as to say that Canada was ignoring the court order and that put society’s faith in the courts at risk if Canada proceeds to ignore the rule of law and the orders of the court,” Hall said.

Justice Leonard Mandamin wrote that Minister Gail Shea’s decision to open the fisheries with a 10 percent cap on harvest amounts to “fudging the numbers.”

“Adoption of this approach is being used to sidestep the conservation assessment. It seems to me once the Minister and the DFO depart from science-based assessments the integrity of fisheries management system is harmed,” Justice Mandamin wrote.

The five nations that make up the Nuu-chah-nulth have been working with the Haida and Heiltsuk nations since mid-January on ways to stop commercial fishing in their territories this season. Because the timing of spawning gets pushed back with colder water temperatures, it made sense for the Nuu-chah-nulth, further south than the other two, to take the first step.

After the decision was made to open the fisheries, the nations reached out to non-indigenous fisherman asking them not to fish in the waters off the west coast of Vancouver Island and Haida Gwaii.

“The industry doesn’t need to come to these three areas for their fish,” he said, adding that there is plenty of stock to harvest in the Straight of Georgia and Prince Rupert. “It seemed to have some effect but there were still boats an gillnetters off the west coast of Vancouver Island.”

Now, both Haida and Heiltsuk nations will follow suit with court action to stop the fisheries in their territories from opening.

The 2009 ruling allowed for a return to court if either party is unsatisfied with the negotiations, and Hall said the nation has scheduled a follow-up court action for next March, though he hopes they won’t have to go through with it.

“The nations are still hopeful here can be a settlement and it doesn’t have to go back to court again wasting everyone’s time and money,” Hall said.

Commercial herrings fisheries all along the BC coast have been closed for years due to depleted stocks, and while herring stocks have risen above the official cut-off mark for opening the fisheries, scientists told Shea that “while there is some indication that the three closed areas are showing signs that the stock is rebuilding, the Department would like to see more evidence of a durable and sustained recovery before re-opening.”

Shea spoke about her decision during question period at the end of last month, defending her position:

“My decision to reopen the herring fishery in the three previously closed areas was based on the department's scientific advice. In fact, the stocks in question were more than 7,000 tonnes higher than what science required for reopening. We are currently reviewing the court's decision, so I cannot comment further at this time.”

Fish out of water: a new future for salmon farming