“Americans are waking up to the fact the tar sands is dirty oil,” says a Manitoba grand chief. 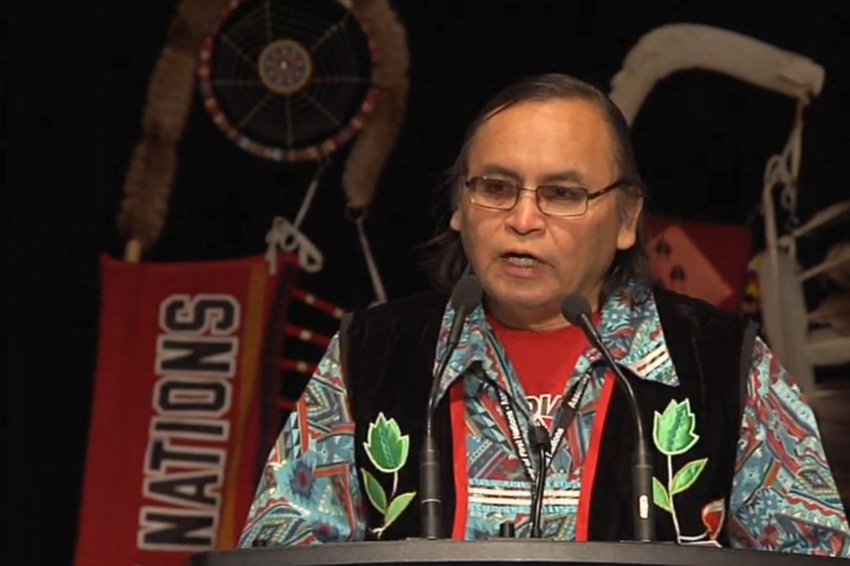 Canada’s Aboriginal leaders’ conflicted views on oil sands development took center stage at the Assembly of First Nations convention in Winnipeg this week – with one new National Chief talking tough about pipelines, while two other former national chiefs get hired on as oil industry consultants for a B.C. bitumen refinery.

“Canada will no longer develop pipelines, no longer develop transmission lines or any infrastructure on our lands as business as usual,” said newly elected National Chief Perry Bellegarde on Wednesday, according to many press reports.

“First Nations peoples will oppose any development which deprives our children of the legacy of our ancestors. We will no longer accept poverty and hopelessness while resource companies and governments grow fat off our lands,” the leader from Saskatchewan added. 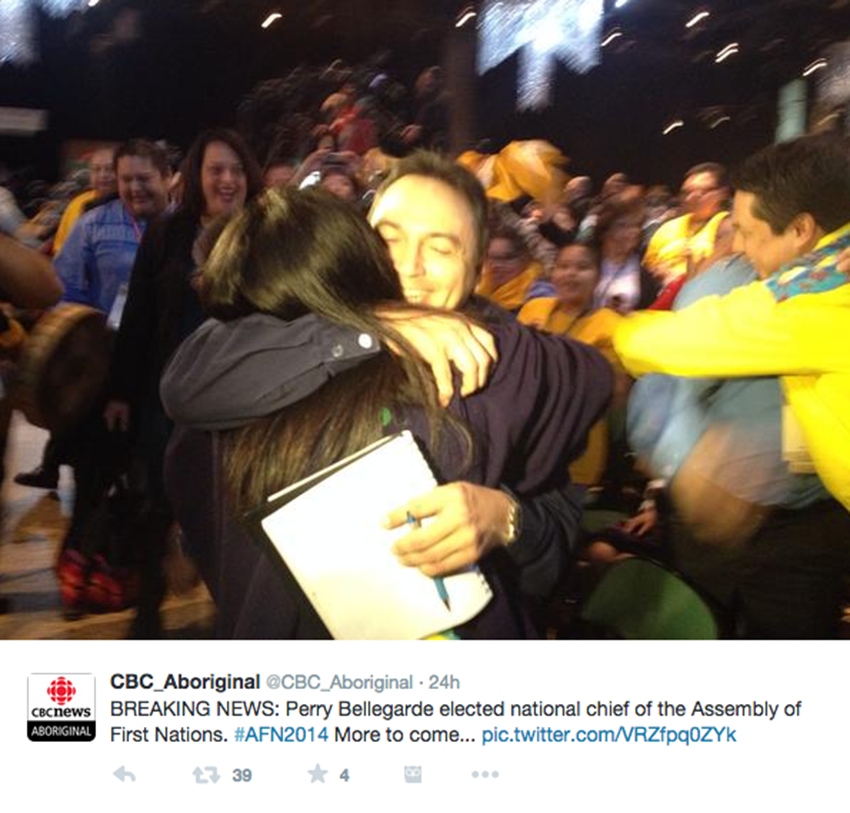 Then on Thursday, the always outspoken Manitoba grand chief Terry Nelson told the convention he would send delegations to the Iranian Parliament as well as to American political offices to press the case that indigenous people will decide if Keystone XL and other pipelines get built.

“Americans are waking up to the fact the tar sands is dirty oil,” said the Southern Chiefs’ Organization leader.

But Nelson was quick to tell the convention -- oil is still an essential part of life.

“People are saying, 'we've got to stop the pipeline, we've got to save Mother Earth… well, we’re all part of the oil [industry].  I see some of you drinking coffee.  Well how do you think your Tim Horton’s got here?  It came here on a truck powered on [diesel].”

Nelson took aim at the Harper government for slashing the budgets of Aboriginal political agencies.  AFN’s budget declined significantly, and the Assembly of Manitoba Chiefs fell by 81 per cent, he said.

“The reason being, they want to shut you up.  Well we’re not going to shut up.  We’re going to talk to the Americans…. And the pipeline companies,” emoted Nelson. 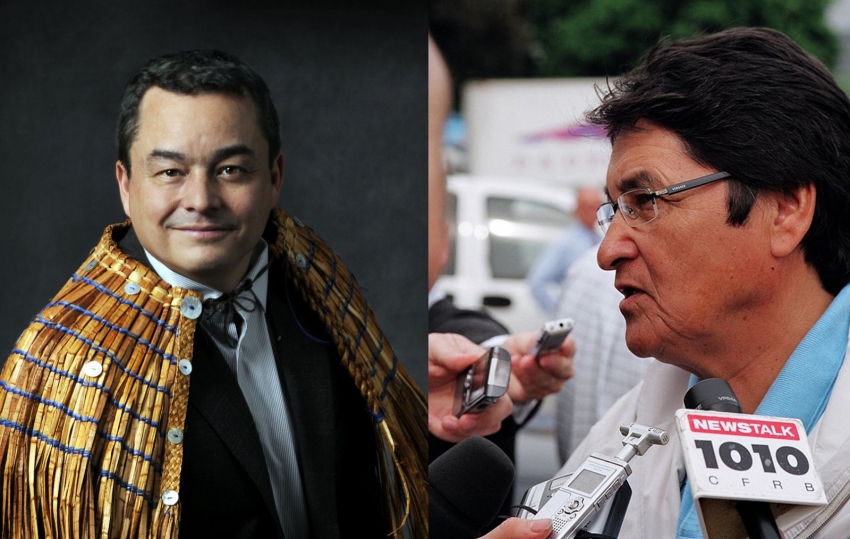 Atleo working for oil refinery for BC

Both ex-leaders now work for Pacific Future Energy – a proposed heavy oil plant that would receive Alberta oil sands bitumen piped to it on B.C.'s coast, possibly near Prince Rupert.

B.C. Premier Clark’s ex-husband Mark Marissen is the project’s Executive Vice President. Marissen is also the head of Burrard Communications, a firm that used to do lobbying work for Enbridge.

The $10-billion bitumen refinery also has the backing of former Conservative cabinet minister Stockwell Day.  Speaking next to Day on Wednesday, Shawn Atleo joked to reporters:

“Pacific Future is an important recovery program for recovering politicians,” Atleo said, according to the Globe and Mail.

The head of the Union of B.C. Indian Chiefs -- Grand Chief Stewart Phillip -- expressed regret that Atleo and Mercredi decided to work for an oil company.  Phillip recently got himself arrested on Burnaby Mountain protesting the controversial Trans Mountain pipeline expansion.
"To be completely honest, I was surprised, shocked and greatly saddened to hear both former National Chiefs Atleo and Mercredi have 'crossed over' and have joined the ranks of the very oil industry that so many First Nation's peoples, and their allies are fighting in the courts, in the streets and on the land itself," he told The Vancouver Observer from Winnipeg.

A third former National AFN Chief, Phil Fontaine was hired last year by TransCanada to be its emissary to the 180 Aboriginal communities crossed by the gargantuan Energy East project.

The proposed $12-billion cross-country pipeline would pump 1.1 million barrels of mostly Alberta bitumen to refineries and export terminals in Montreal, a Quebec town, and St.John. 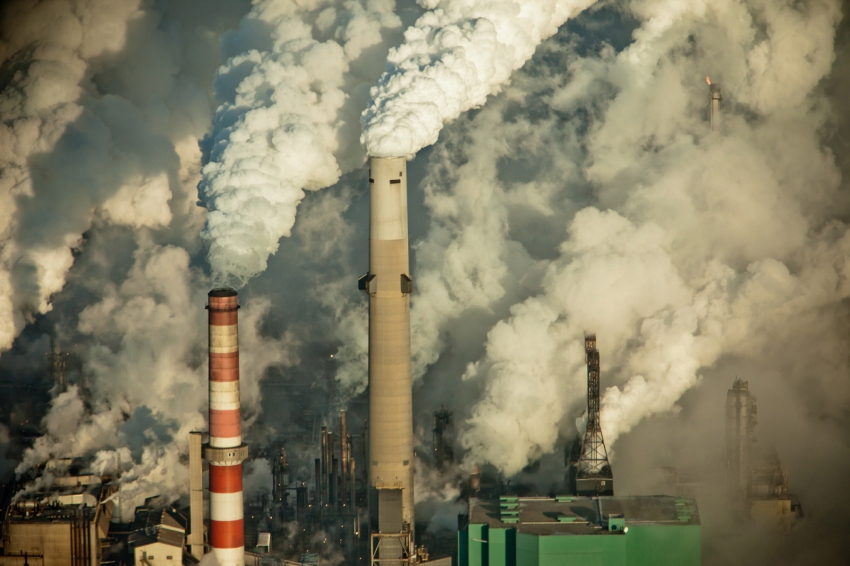 BC First Nation chiefs tell Alberta Premier: “We’ll do what needs to be done to make sure Northern Gateway is never built.”