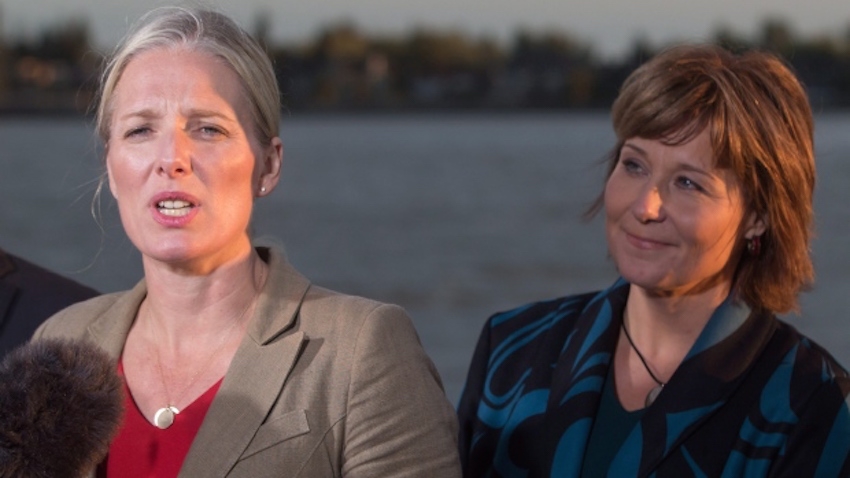 The federal government is standing behind its decision to approve the massive Pacific NorthWest LNG project, despite facing new court challenges and accusations that it has broken climate promises.

Two First Nations and an environmental group filed separate applications for judicial review in Federal Court on Thursday. The actions aim to quash the government's approval of the $11.4-billion export terminal near Prince Rupert on Britsh Columbia's northern coast.

The Gitwilgyoots Tribe and Gitanyow Hereditary Chiefs allege the government failed to properly consult with them, while SkeenaWild Conservation Trust is challenging the Canadian Environmental Assessment Agency's conclusion that the project won't have a significant impact on salmon.

Greg Knox, executive director of SkeenaWild, told reporters outside Vancouver's Federal Court that the government's decision to approve the project was disappointing given the "incredible promises" Prime Minister Justin Trudeau made on climate change.

"He said that he was going to balance the economy with the environment," Knox said. "How can you place an $11-billion industrial facility right over top of the most critical salmon habitat in Canada and protect the environment?"

The project, which is majority-owned by Malaysia's state oil company Petronas, would place a natural gas liquefaction facility and export terminal on Lelu Island at the mouth of the Skeena River. The area, called Flora Bank, is a juvenile salmon habitat.

Environment Minister Catherine McKenna announced Sept. 27 the government would approve the project subject to 190 conditions, including a cap on carbon emissions.

She defended the decision Thursday in a statement asserting that the project underwent a rigorous three-year assessment. Indigenous groups participated in the process and will be part of a first-ever "monitoring committee" along with the federal and provincial governments, she said.

The environmental assessment agency expressed uncertainty about the effectiveness of this plan, yet concluded that it and other mitigation measures would reduce the otherwise significant adverse affects of the project on fish, the court document said.

SkeenaWild said it is also challenging the agency's failure to assess the cumulative climate effects of the facility. The agency did look at the annual effects and concluded the project will become one of the largest greenhouse gas emitters in Canada, according to the document.

The Gitwilgyoots is one of the nine allied tribes that make up the Lax Kw'alaams, which claims Lelu Island and Flora Bank as part of its traditional territory.

The Lax Kw'alaams Band — represented by an elected council — signalled its support of the project in March. However, some hereditary chiefs of the allied tribes remain opposed.

In its notice of application, the Gitwilgyoots said it wrote to the environmental assessment agency in April asserting its title and rights to territories including Lelu Island and the project site.

The agency met with the tribe twice this summer, but sent a letter implying that the Lax Kw'alaams Band held the relevant rights and title.

"At no time in its interaction with the Gitwilgyoots did the Agency or the Crown state that it did not intend to fully consult" with the tribe, the document added.

The Gitanyow Hereditary Chiefs said in their application that the project could worsen already "depressed and fragile" salmon stocks in the Kitwanga River, about 250 kilometres inland from the mouth of the Skeena.

Pacific NorthWest LNG said in a statement that it has been meeting with local First Nations since 2012 and is continuing to work collaboratively with them.