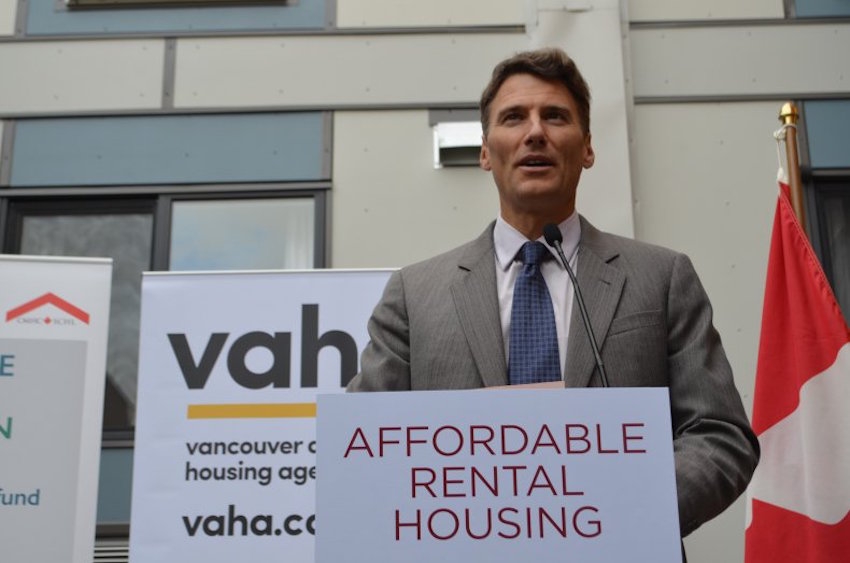 In a city where a one-bedroom apartment rents for an average of $1,900 per month, some Vancouverites in urgent need of a home have a new alternative: a room in a portable housing development that took less than six months to build.

The first of an expected series of inexpensive, portable homes - designed to quickly increase shelter for poor residents -- was officially opened Thursday afternoon in Vancouver. Social Development Minister Jean-Yves Duclos flew in for the unveiling. He described the project as the beginning of what the federal government hopes will be many creative efforts to reduce poverty and homelessness across Canada.

In an interview with National Observer, he also signalled that "significant" investments were on the way for housing in the Trudeau government's spring budget.

“This is a new approach in Vancouver and a great example of how innovation and collaboration can lead to new housing options for all Canadians,” Duclos said at the launch.

The box-like building located on city-owned property across from Vancouver’s Science World, has room for 40 low-income residents. For $375 per month, they can rent a studio apartment with a window, a small kitchenette and room for a single bed and a few pieces of furniture. The project can be dismantled, packed up and moved to other locations as needed. The $3 million development was the first to receive financing from the federal government’s $200-million Affordable Rental Innovation Fund. 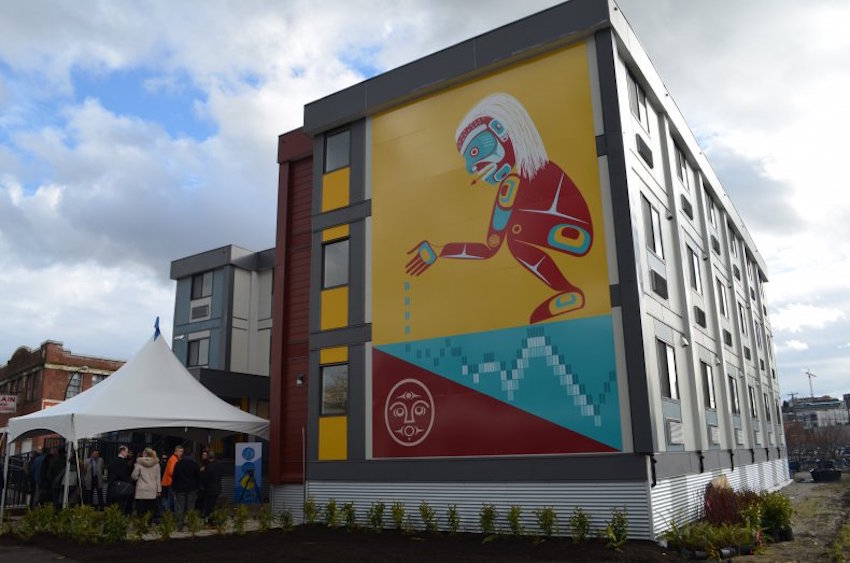 The federal government and the city of Vancouver unveil a new affordable housing project on Feb. 16, 2017. Photo by Alia Dharssi.

The aim is to quickly house people in need while more permanent units that take years to construct are in the works, said Vancouver Mayor Gregor Robertson.

“People will be moving in here much, much faster than most of the affordable housing projects that we do, which are more permanent obviously, but this enables us to get units open to people who are maybe on the streets, maybe in shelters,” he said. 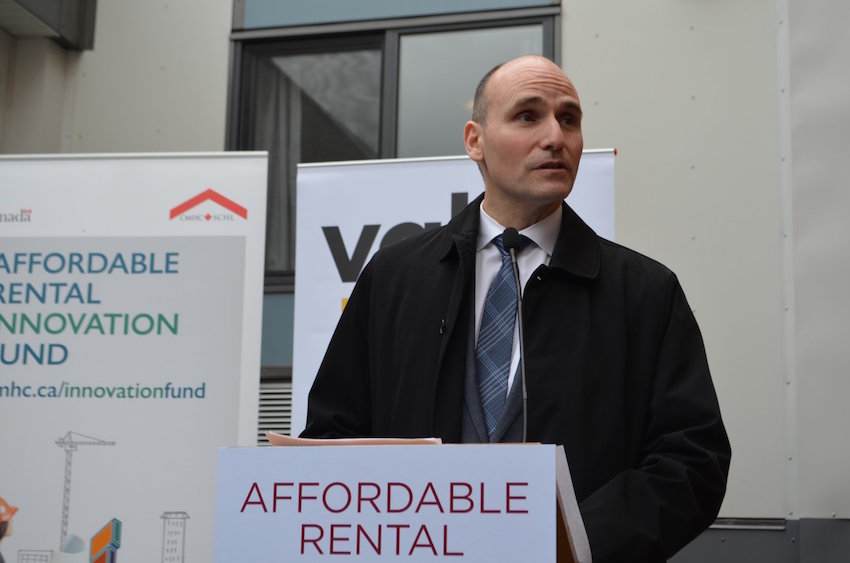 Federal Social Development Minister Jean-Yves Duclos launches a new affordable housing project in Vancouver on Feb. 16, 2017. Photo by Alia Dharssi
In the interview, Duclos described the initiative as the beginning of an effort by the federal government to “significantly re-engage” with social housing after leaving it in the hands of the provinces for two decades.

After meetings with Metro Vancouver mayors and representatives of a non-profit that helps homeless youth, the minister spoke excitedly about initiatives to tackle poverty and housing challenges in the region. He described a clear need for federal assistance for such initiatives.

“This disengagement (in social housing) is creating severe problems,” Duclos said, noting how people had been pushed onto the streets by high and rising housing prices plus inadequate investment in social housing.

“Local governments ... are facing significant social and financial difficulties in looking after that housing stock,” he said.

Duclos also said he hopes the effort will help tackle poverty across the country and that the government’s upcoming National Housing Strategy will “establish how to make sure that a right to housing is properly addressed.”

According to federal data, three million Canadians fell below the poverty line in 2014. In addition, over 655,000 Canadians households spent half or more of their income on housing that year. Nine out of ten of them had low income. In Vancouver, a count by the city in 2016 revealed that homelessness was at a 10-year high.

Vancouver anti-poverty advocates who spoke to National Observer said they were hopeful about the new developments.

“This is a piece of the puzzle that is warmly welcomed,” said Jeremy Hunka, spokesperson for the Union Gospel Mission, a non-profit that helps homeless people in Vancouver. “... But what we really need as well is permanent, affordable housing.”

Over the past two years, the Union Gospel Mission has had clients who were ready to move out of the Mission’s shelter and pay for rental housing, but couldn’t find any because of soaring rents in Vancouver, said Hunka. They stayed with the Mission, which, in turn, couldn’t bring more people off of the streets. 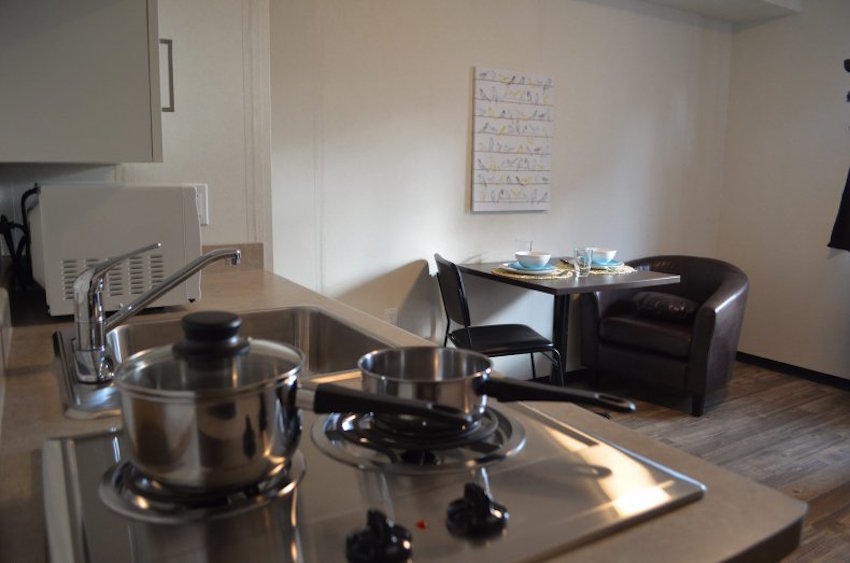 A look inside a studio in the portable apartment building unveiled in Vancouver on Feb. 16, 2017. Photo by Alia Dharssi

BC Poverty Reduction Coalition estimates that 10,000 social housing units are needed in Vancouver annually to tackle poverty. In addition, it would like to see investments in affordable childcare, education, healthcare and targeted projects for indigenous people and others facing higher rates of poverty.

National efforts to increase social housing and reduce poverty may not be effective if B.C. does not develop it’s own poverty reduction plan, said Trish Garner, spokesperson for the coalition. “What we really need is a comprehensive strategy with legislated targets and timelines.”

Even so, Duclos said he hopes cities across Canada can learn from the housing initiatives in Vancouver.

“I would certainly like to single out the greater Vancouver area as a role model,” he said.