“Good for him.  I’m happy he’s here," West said.  "He’s welcome to speak his mind.  I think he’s going to have a hard time convincing people around here that pipelines are a good idea.”

“Really my biggest fight with Ezra is around climate change.  He doesn’t really believe in climate science.  I think everyone has a right to their own opinions, not to their own facts.”

A small pro-resource development group was at the back of the rally, with several large signs that read “we love jobs” and “we love opportunity.” 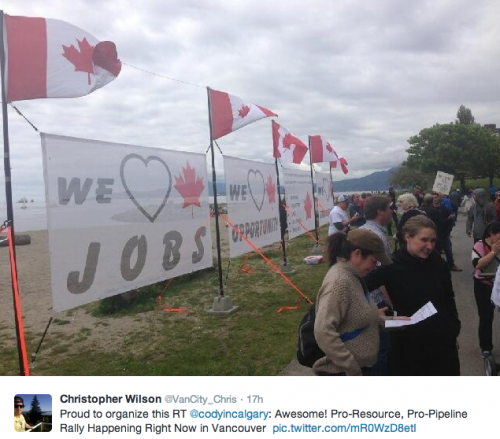 Christopher Wilson was among them wearing an “I love oil sands” t-shirt.

“I do believe the oil sands are a major part of that resource sector, and it’s a great opportunity for young people in Western Canada to go make an incredible living at this point, as well as an opportunity for those in the future too,” said Wilson.

Wilson said their activity was not paid for by industry.

“No, we’re just a group of grassroots people who put this on.  There’s only about a half dozen of us or so.” 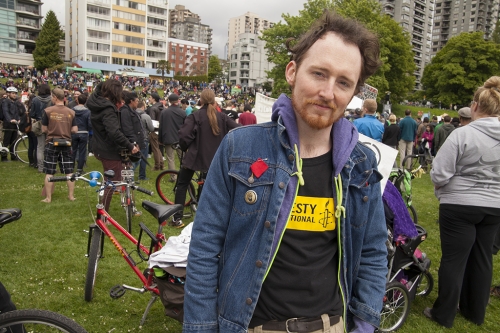 Ezra Levant also interviewed another Ezra -- Ezra Fulford.  While the two joked about their shared first name, Fulford said they had little else in common.

“I think that it’s good for the rally that he’s here.  It’s something the right wing have to cover.  The Ethical Oil mindset definitely leaves a bad taste in my mouth,” Fulford said.

The rally was organized to gather attention for Prime Minister Harper's imminent decision on Enbridge's Northern Gateway pipeline project.  By mid-June, Harper will rule on whether to green-light it.

Levant's book Ethical Oil became the basis of a blog created by Prime Minister Harper's Director of Issues Management Alykhan Velshi, which later became the foundation of a pro-oil nonprofit, according to EthicalOil.org. 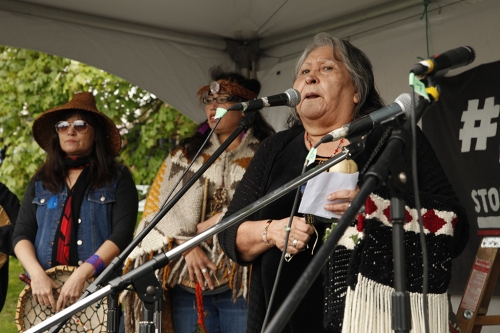 Ezra's Sun TV story on the rally, aired May 12