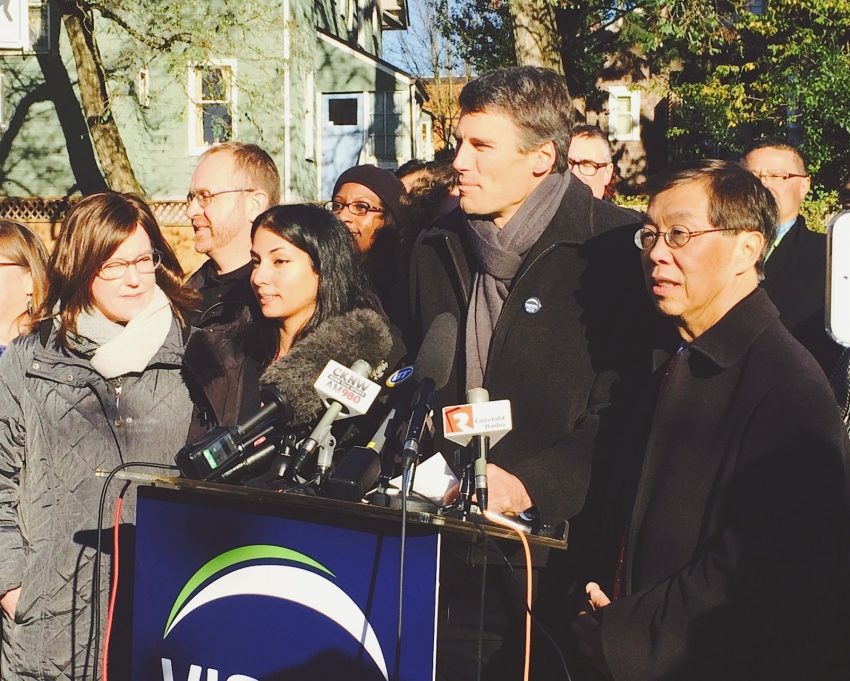 “There is a lot at stake tomorrow,” Mayor Robertson said at a press conference at Delamont Park this morning. “In an election that is this close, we are asking the progressive voters across Vancouver who are undecided to cast their votes for Vision.”

With just one day to go before the election, all candidates were out today canvassing for votes. Robertson said that this year's campaigns have been especially "nasty" and "personal".

“I’ve never endured personal attacks like we’ve seen in the past number of months from the NPA," he said. "That’s the style and approach they’ve taken, and I don’t think it’s good for politics in Vancouver.

"We’ve had a very negative NPA campaign, bringing kind of US style, personal attacks into the campaign in Vancouver for the first time contrasted with Vision," he said.

When asked about his personal attacks on LaPointe in Vision’s own ads, such as the video showing LaPointe dismissing a question, Robertson responded that it was "bizarre" that the NPA tries to "shut out people" from recording comments at their press conferences.

LaPointe, meanwhile, criticized Robertson repeatedly for lack of openness and transparency in City Hall. He said he would consult with communities more, and told CTV earlier today and mentioned that he is willing to dismantle the $6 million Point Grey bike lane, if that’s what the residents wanted.

“And even if the community says they’re not sure about it anymore, I have to examine the city finances properly. I need to make sure that it’s not going to cost us millions of dollars to dismantle something,” he told the reporter.

Robertson said voters cannot rely on LaPointe to take a clear stand on any issue, and that LaPointe had often switched his position often on bike lanes.

Robertson also addressed his apology at a debate on Wednesday where he said sorry to citizens if they felt they haven’t been heard in the past term.

“I’ve reflected my desire to do more listening in the four years. I’ve apologized for having a very bold agenda that frankly some people didn’t think they were heard,” he said. “We need to do better and make sure people do feel heard but we also have to tackle those tough issues.”

Following his press conference near the proposed subway near Arbutus and Broadway, Robertson and the Vision team boarded the 99 B-Line around 11 a.m. to emphasize the importance of a new subway and to partake in some last minute canvassing. 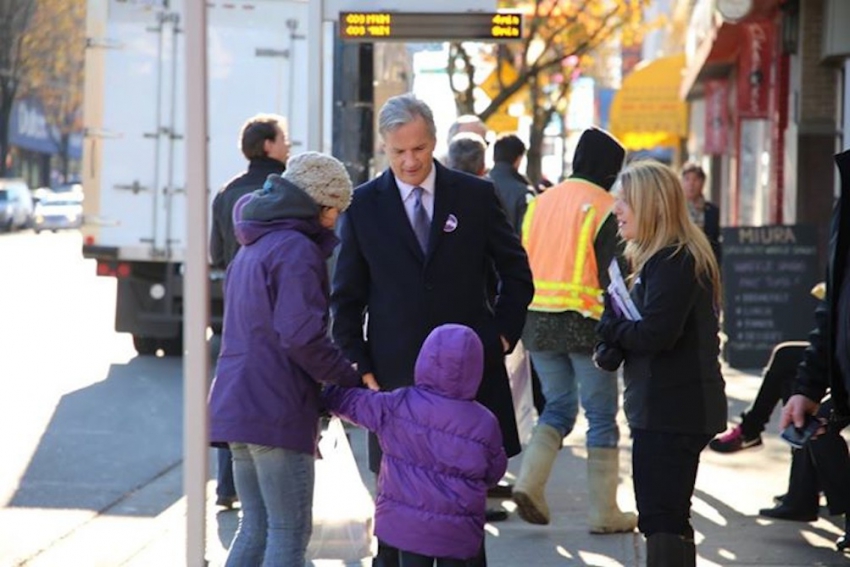 NPA’s Kirk LaPointe does some canvassing of his own in the city (Photo from Facebook).

“I think we’re seeing a close election,” said Robertson. “The polling numbers are unreliable at best in recent elections. We just work hard at making sure we and reach out to progressive voters. We have had strong majorities for two terms and we’ve been focused on progressive issues for a progressive city.”