Dozens of masked protesters held signs to criticize shipment of Canadian bitumen to Europe, which could dramatically increase if the proposed Keystone XL pipeline is built. 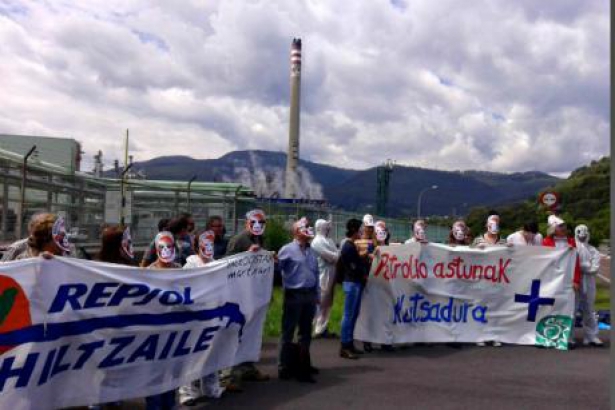 About 50 people staged an impromptu demonstration in Bilbao, Spain upon the arrival of the first bitumen shipment from Canada last week. About 600, 000 barrels of Canadian heavy blend crude was shipped to port of Bilbao by the Spanish oil company Repsol on May 29th.

The protests, EurActiv reports, were quickly staged after Environmental groups realized the bitumen had already arrived. Dozens of locals and environmentalists from across Europe protested outside of the Bilbao refineries for the remainder of the afternoon. They were supported by major environmental groups including Friends of the Earth, Greenpeace and Transport and Environment.

The oil shipment was Western Canada Select heavy blend crude. The fuel cargo was part of a pilot project, Repsol stated, "to determine whether bulk imports are feasible." But while considering the costs and risks associated with the project, the company "rejected residents' concerns about pollution" in the process, EurActiv argues. If the deemed successful, the project would encourage increased transport of Canadian bitumen to Bilbao.

The proposed Keystone XL pipeline, which would bring bitumen from Alberta to refineries in the U.S., would have a significant impact on Canada's oil relations with the EU, according to a DeSmogBlog. While Europe currently imports around 4,000 barrels per day, there is potential for that o increase to as much as 700, 000 bpd by 2020 if the pipeline were built.

“Europe can’t be both a climate champion and a market for climate-wrecking tar sands," Franziska Achterberg of Greenpeace-Brussels said in Transport and Environment. "The EU must uphold its environmental credentials and stand up to the intense lobbying by the oil industry and the Canadian government.”