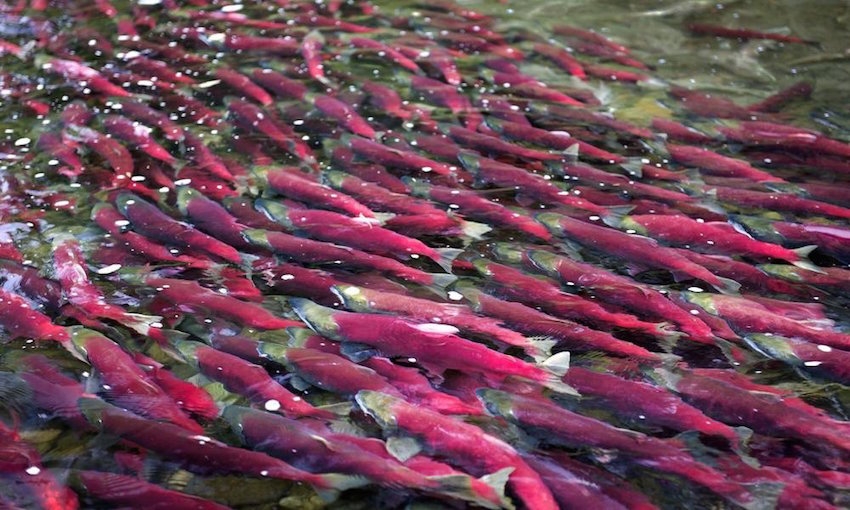 A study with 'first published evidence that a European variant of the infectious salmon anaemia virus (ISAV) is present in British Columbia is extremely disturbing,' a news release from the Ahousaht First Nation says.

Alexandra Morton, a biologist with Raincoast Research Society, stated, “This work gives B.C. and our U.S. neighbours the opportunity to avoid tragic consequences.”

“I’m so glad to see this paper finally published. I produced a documentary about exactly this issue in 2013 called Salmon Confidential which documents evidence of dangerous European salmon viruses including ISAV which have been introduced to our wild Pacific salmon through farmed Atlantic salmon eggs imported from Europe ,” added filmmaker Twyla Roscovich. "The film is free to view online for anyone interested in the backstory.”

The peer-reviewed study was published in the Virology Journal, a scientific publication that the group describes as 'a leading academic open access publisher in the areas of biology, medicine and health.'

Jeremy Dunn, the executive director of the BC Salmon Farmers Association, disputed the report's findings, saying Morton has previously reported "false positives" of the virus.

“We have great concerns about the methodology, and the ethics of the researchers involved, given their history of reporting false positives with respect to ISA," he said in a statement. "ISA has never been detected in fish on the West Coast of North America. This has been confirmed through thousands of tests by CFIA, as well as thousands of tests by authorities in Washington State, Oregon, and Alaska.

"Farm-raised salmon in B.C. are healthy and have never shown signs of sickness from ISA. This report claims to find an ISA sequence, but the researchers admit they were unable to verify it using necessary, globally standard follow-up tests."

But some First Nations spokespeople expressed concern about the virus.

“We see too many wild salmon in our nets with open sores. Some look good on the outside but when we open them, we find numerous white and green balls that look like cancer cells. We burn these fish instead of throwing them back in the environment so the bears, eagles and other wild life don’t get sick. We witnessed too many pre-spawn deaths. This study adds to our grave concerns about fish farms, and they must be removed from the ocean,” asserted Shane John, a Katz First Nation fisher.

The Ahousaht First Nation made the decision in 2015 to have a fish farm removed from their territory.  “By not allowing this fish farm in our territory, we gave the wild salmon of the Atleo river a fighting chance to survive, and we protected nearby clam beds to feed future generations,” said Lennie John of Ahousaht First Nation. “To me, this study reconfirms fish farms don’t belong in the ocean.”