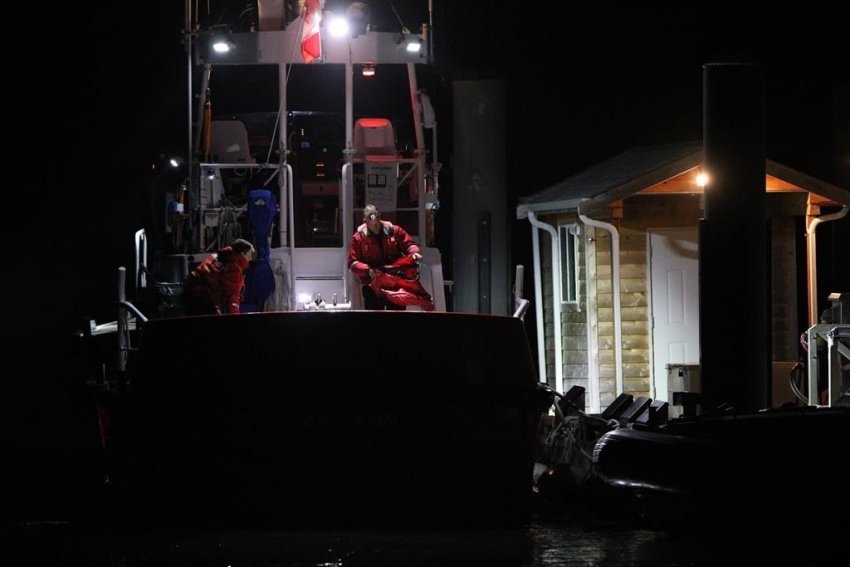 VICTORIA — The whale-watching ship that capsized off British Columbia's coast, killing five people, passed a stability test after an observation deck was added when it was converted from a tugboat, Transport Canada said Thursday.

The Leviathan II, originally built in 1981, was once a forest-industry tug and was lengthened and had a deck added 15 years later for the whale-watching industry.

The ship capsized on Sunday with 27 people on board, about 15 kilometres from the tourist community of Tofino, which is located on the west coast of Vancouver Island.

Five British nationals died and a 27-year-old male from Australia is missing.

Preliminary findings from Transportation Safety Board investigators indicate most passengers were on the top deck when it was hit by a wave from the opposite side and rolled, sending all aboard into the water.

"We know that most passengers and crew were on the top deck on the port side ... this would have raised the centre of gravity, affecting the vessel's stability," Marc-Andre Poisson, the TSB's director of marine investigations, said earlier this week.

Transport Canada states on its website that vessel stability is a fundamental component of seaworthiness, and it is in the interest of owners and operators to ensure their vessels have a satisfactory level of stability in order to ensure safety.

"A vessel’s stability is the measure of its ability to withstand high winds, waves and other forces resulting from its operations and resist capsizing by returning to an upright position after being heeled over," the website stated.

Transport Canada did not provide the details of the Leviathan's so-called incline test. The website states naval architects can determine stability with mathematical formulas that indicate the forces acting on the vessel at different incline angles.

But it warns "compliance with the stability criteria does not ensure immunity against capsizing."

Jamie Bray, owner of Jamie's Whaling Station and the Leviathan II, said the boat sank in an area it goes to almost daily and the boat has operated for 20 years "with an absolutely perfect safety record."

But one of the company's smaller rigid-hulled inflatable boats also had a fatal accident in 1998.

TSB spokesman Eric Collard said Thursday efforts were underway to refloat and salvage the Leviathan II, but it could take weeks.

He said divers were able to recover electronic equipment that could provide valuable data to piece together the sequence of events surrounding the sinking.

"We were successful in extracting some of the electronics and it's being sent to our engineering lab in Ottawa for examination," he said. "Any information that can be extracted can help the investigation."

The TSB's report into the sinking could take months to complete, but the federal body, can issue public statements in the interests of safety prior to the release of a final report, Collard said.

Opposition New Democrat member of the legislature Scott Fraser, who represents the Tofino area, was the resort community's mayor in 1998 when two people died in a whale-watching accident involving the smaller boat owned by Jamie's Whaling Station.

Fraser said whale watching has its risks but people are drawn to the adventure and majesty of the local environment.

"Whale watching, if you look at the track record of it, has a pretty darn good record for safety," he said. "The problem being is it's the open Pacific. People are coming to the west coast of Vancouver Island to experience by the millions the raw power of the place."

Community response helped save 21 from sinking whale-watching boat off B.C.